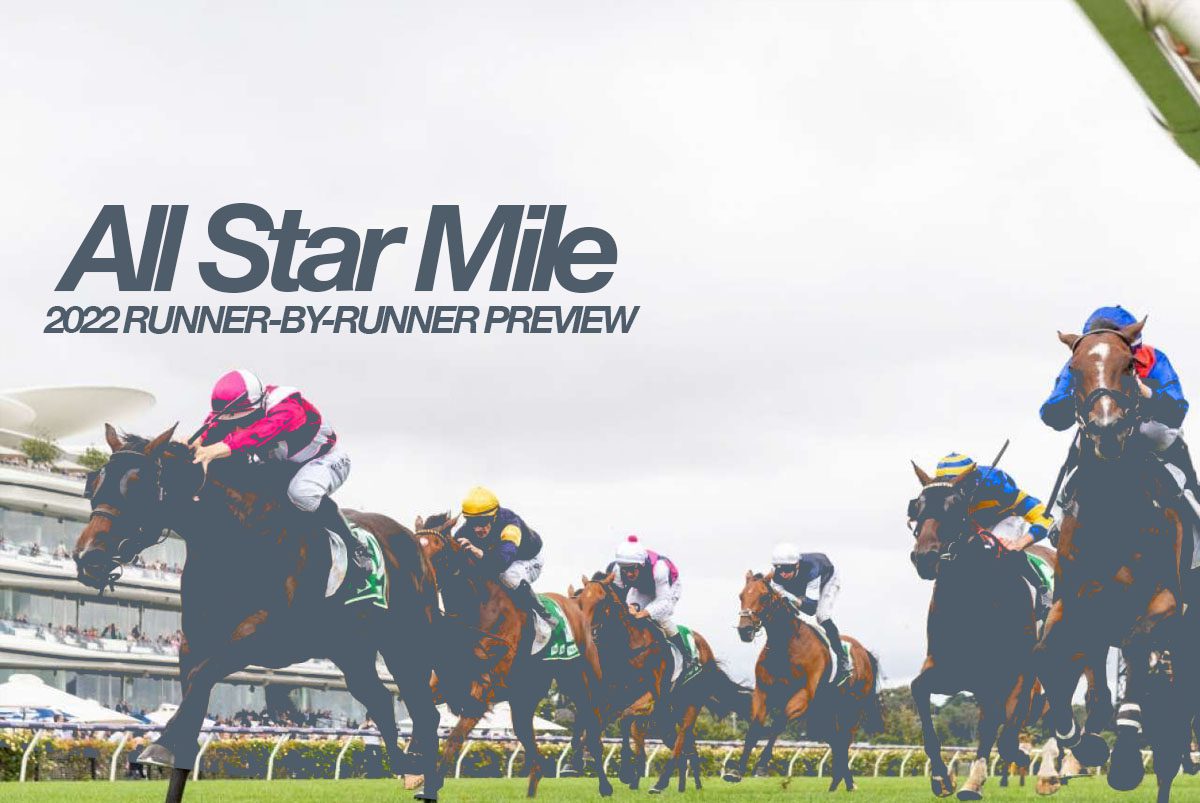 It has been months in the making, but the 2022 All-Star Mile is finally upon us, with a field of 15 proven Group 1 quality horses set to duke it out over 1600m at Flemington.

No fewer than 10 Group 1 winners have assembled to compete for the $5,000,000 prize pool, with the Annabel Neasham-trained Zaaki a $3.20 favourite with online bookmakers, while I’m Thunderstruck and Inspirational Girl loom as the two obvious dangers.

As always, all eyes are drawn to the early speed battle, where runners like Callsign Mav, Lightsaber and Streets Of Avalon are expected to set the tempo. Mr Brightside and Zaaki look to be ones who settle just off the speed, whilst fellow market fancies I’m Thunderstruck, Sierra Sue, Pinstriped and Inspirational Girl are expected to sit towards the second half of the field.

Keep reading for our full runner-by-runner preview of the 2022 All-Star Mile and $100 betting strategy.

Having won the Golden Eagle and the Toorak Handicap in the spring, the ceiling simply had not been reached by the Mick Price & Michael Kent Jr-trained I’m Thunderstruck. However, his two runs this campaign – in the C.F. Orr Stakes and then the Futurity Stakes – have shown that he is nowhere near his best this time in. Sure, he will appreciate the extra 200m on Saturday when he steps up to the mile, but whether he can get the better of Zaaki remains to be seen. Barrier one makes his job even harder, considering his best performances have comes when settling midfield with cover and unleashing down the centre of the straight. Too much has to go right for I’m Thunderstruck, and in what might be a controversial opinion, we think he will struggle to run top four.

The Annabel Neasham-trained Zaaki has had the All-Star Mile as his main goal for the autumn ever since claiming the Mackinnon Stakes at Flemington during the Melbourne Cup Carnival. He is one of the best horses going around in the country and, with the in-form Jamie Kah on board, is clearly the one to beat. Despite getting pipped in the shadows of the winning post by Inspirational Girl in the Blamey Stakes a fortnight ago, he clearly wasn’t screwed down for that and still managed to go close. The step up to the mile looks perfect second-up from a spell, and even though he has drawn barrier 15, we expect Zaaki will get the job done on talent alone. Look for Kah to have him settled in the one-one before making a move approaching the home turn and ultimately proving too good.

On the quick seven-day backup since running fifth in the Australian Cup last weekend, the James Cummings-trained Cascadian will need to go to whole new level if he is to get the better of his rivals here. Despite not running outside of the top three in three goes at the Flemington 1600m, this looks to be the strongest field he has come up against at the track and trip. Three starts back he chased home Tofane and subsequent Coolmore Classic winner Lighthouse, before claiming a Group 2 win in his next run. However, he didn’t show much when beaten close to five lengths last weekend, and we just don’t think he has the rapid improvement required to be competitive in this.

With two starts to his name already in All-Star Mile history, the Shane Nichols-trained Streets Of Avalon will become the first runner to go around in a third edition. With a seventh-place finish in the race last year and a 12th in 2020, Streets Of Avalon looks set to struggle this year. He is a $201 chance with online betting sites for a reason, having struggled in both starts this campaign.

The 2021 Australian Guineas winner is back to build on his fourth-place finish in the race last year, although he is yet to finish better than fifth in any race since. Lunar Fox sprung a surprise in his Group 1 win just over 12 months ago and will need to do something similar at the Flemington mile in this.

The Pakenham Cup winner from the spring is yet to produce his best this time in. Having finished midfield in The Elms and then midfield in the Blamey when beaten close to five lengths, King Magnus looks set to struggle in stronger company on Saturday. With a five-length margin to make up on Zaaki and Inspirational Girl, as well as needing to combat several other Group 1 stars, the six-year-old gelding is up against it.

Having gone down a nostril in the TS Carlyon Cup to Earlswood two runs back when resuming from a spell, the Danny O’Brien-trained Callsign Mav looked set for a big autumn prep. However, those levels of expectations dropped suddenly when struggling in Group 1 company in last week’s Australian Cup. He needed an easier race than that, which he does not get in this. It is unlikely he troubles many of these.

Once Mr Brightside drew barrier two, his chances in the race became even greater, with Craig Williams able to track the speed throughout. The four-year-old gelding led the field up in the Blamey Stakes before Zaaki and Inspirational Girl gobbled him up inside the final furlong. However, on Saturday we expect Willow to take a sit of the speed and give Mr Brightside the run of the race. He absolutely eats up the mile, winning five times from seven starts at the trip, and if the Hayes runner is near his best, then he becomes a genuine winning chance. We can’t have them all in our top four, but Mr Brightside has to be respected.

The Brad Widdup-trained Icebath is as honest as they come, but with four wins from 28 starts, it is hard to mount a case for her winning chances in the All-Star Mile. She was done as a $2.05 favourite in the Guy Walter Stakes when beaten close to five lengths by subsequent Canterbury Stakes winner Forbidden Love. She went within a nostril of claiming the Cantala Stakes during the spring, but her two runs this campaign have been nowhere near that level. We’re anticipating a midfield finish for the Sacred Falls mare.

The Mike Moroney-trained Tofane will need to turn the tables on Sierra Sue, who got the better of her in the Futurity when they last clashed three weeks ago. However, prior to that, the four-time Group 1-winning mare had bolted in the C.F. Orr Stakes when beating a few of her rivals that she meets on Saturday. The mile is always a query with Tofane having placed just once in three goes at the trip. With a majority of her rivals much more suited to the mile, we expect she will find the last 200m challenging. Despite being a $15 chance, we would have this one going around at a bigger price than that.

The one we are giving a big chance at a double-figure quote is last-start Futurity Stakes winner Sierra Sue. The Trent Busuttin & Natalie Young-trained mare looked to have plenty left in the tank when sprinting clear in the Futurity, and at this point in her career she looks perfectly placed for the step up to the mile. Like Tofane, she has struggled at the mile in the past, but that last-start win makes her hard to ignore this Saturday. From barrier 13, Johnny Allen will need a touch of luck in finding a spot in the first half a dozen or so with cover, but if he is afforded that, then Sierra Sue’s turn of foot is more than good enough to take out a race like this.

The Danny O’Brien-trained Inspirational Girl was a smart winner when sprinting better than Zaaki in the Blamey Stakes over 1400m and is set to lock horns with him once again. She may have a tactical advantage on his rival having drawn barrier four and, with Damian Lane sticking on board, is sure to gain the perfect run in transit. She showed a sharp turn of foot in the Blamey which saw her wear down Zaaki inside the final 100m, and if she has come on even further from that second-up run, then we expect her to give Zaaki another scare.

The first of the three-year-olds is the Peter & Paul Snowden-trained Captivant and is in need of a dramatic form reversal to be prominent in Saturday’s race. He was given every chance in the Australian Guineas, but he simply did not run on from an ideal position in the home straight. Both Lightsaber and Pinstriped managed to beat him home comfortably, and we expect not only those two rivals, but a majority of this field, to beat Captivant home.

Whenever the question is asked of Lightsaber’s class, the Peter Moody-trained colt continually produces a run that screams out Group 1 quality. He was outstayed by Hitotsu in the Guineas last time out when finishing second having looked like the winner when taking the lead at the clock tower. The wide barrier of 12 is negated by the fact he is a genuine front-runner, and we are sure he will be in the race for a long way. He may lack the polish on some of his older rivals, but the Zoustar colt is capable of a bold showing on his day and could be one to add into wider exotics.

There is no need to watch the replay of the Australian Guineas if you were on Pinstriped; he deserved to finish closer than what the four-length margin suggests. He was continually held up for a run and was absolutely butchered by Michael Dee on the day, with the three-year-old Street Boss gelding making up great ground when untested through the line. He is clearly a three-year-old with plenty of ability, and if he is anywhere near his best, he could become the second three-year-old to take out the race following Mystic Journey’s success in 2019. His turn of foot is electric, and barrier eight looks ideal for him to get back upon settling and flash home late. Whether he has the quality of some of his older rivals remains to be seen, but if Pinstriped sees clear air at a crucial time, he is more than capable of springing a minor upset.