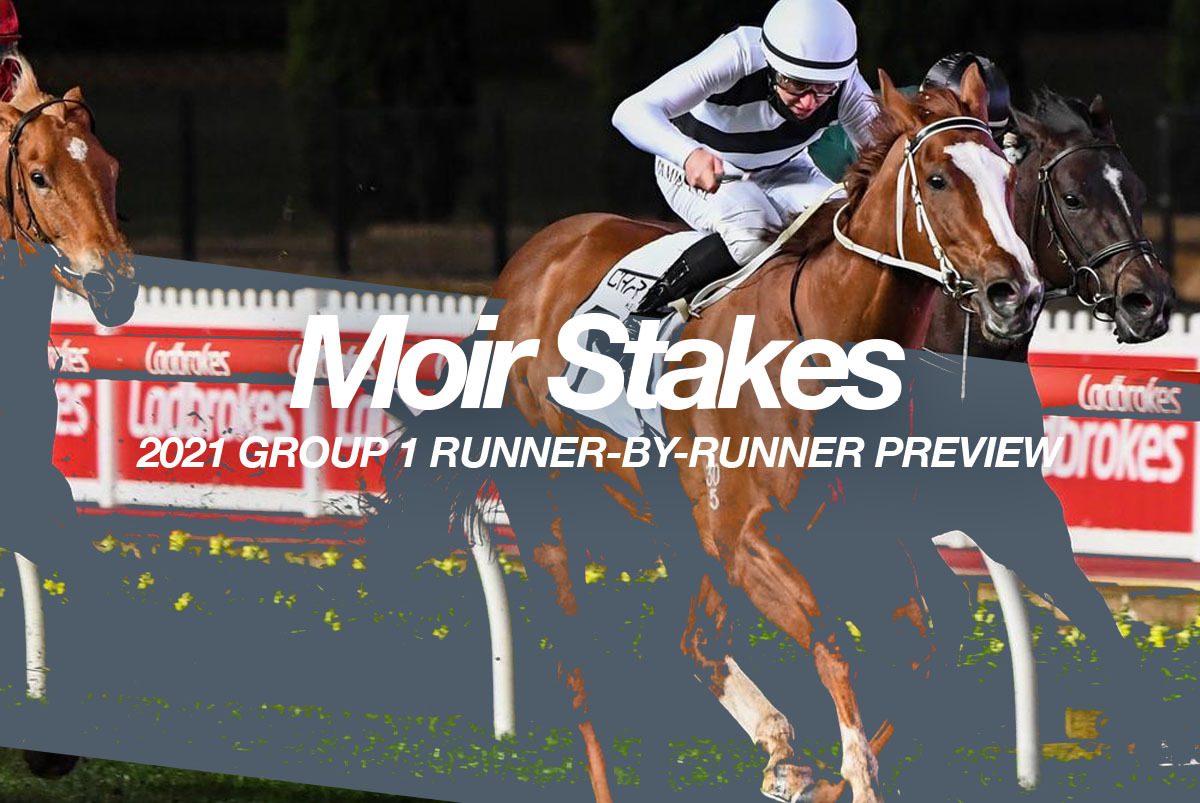 The Moir Stakes is the first of the Group 1 races at Moonee Valley for the 2021/22 season, and HorseBetting’s Victorian form analyst presents his runner-by-runner preview, top selections and betting strategy for the $1,000,000 Friday night feature. Profiteer is a $4 favourite in the 1000m weight-for-age sprint, ahead of The Inferno ($5), Wild Ruler ($7.50) and September Run ($8.50).

Having chased home Nature Strip in the Group 2 Concorde Stakes at Randwick on September 4, the James Cummings-trained Trekking comes to the Moir Stakes second-up from a spell. He has three wins from nine starts when second-up, but the fact he has not won since May 2020 when taking out The Goodwood suggests he may struggle on Friday night. He has a decent record at The Valley without winning (4:0-2-1), but if he brings his absolute best, he looks to be an each-way hope considering he is drawn in barrier three and will be the one with the last look at them in the home straight.

The Peter & Paul Snowden-trained Wild Ruler is another who comes through the Concorde Stakes, where he was the best of the beaten bunch behind Nature Strip. The slight query we have is that he only beat Trekking home by half a length, yet Wild Ruler is a $7.50 chance and Trekking is a $13 pop here. Wild Ruler’s only placing in four Group 1 runs came in the Coolmore Stud Stakes at Flemington last year behind September Run and Swats That, and he meets those two again on Friday night. Although he has plenty of talent, we’re happy to see him go around without any of our hard-earned.

Plenty wrote off The Inferno following his first-up stinker in the Listed Regal Roller Stakes on August 14, but the way the Cliff Brown-trained gelding won the Group 2 McEwen Stakes suggests he is a big chance in the Moir. He displayed a sharp turn of foot to cruise past Portland Sky and go on to win by a length at Moonee Valley, and the Japanese galloper looks well placed to do something similar on Friday night. He will no doubt appreciate the experience of going around The Valley 1000m already, not to mention the hot tempo that is expected. If he can deliver a similar performance in the Moir as he produced in the McEwen, The Inferno is a winning chance and must be included in all exotics.

We were with the Matt Laurie-trained Portland Sky in the McEwen Stakes when he ran into The Inferno first-up from a near six-month spell, and we believe the son of Deep Field will have taken great benefit from that run. He has one win from two second-up runs and will no doubt be one of the main contenders in the 1000m dash. As he showed when winning the Oakleigh Plate on February 20, he can settle just off the leader’s heels on the back of a hot tempo and still provide a sharp turn of foot. If he can do something similar in the Moir Stakes, Portland Sky will be every chance to add a second Group 1 win to his tally. The each-way price is too good to ignore.

September Run from the Chris Waller yard is a genuine star; however, in our opinion, she is not a Moonee Valley horse, let alone a ‘barrier one at The Valley’ horse. She loves to get back in the running, get a tow into the race and build through the gears, but she will not get that sort of race on Friday. Craig Williams hopping off to ride Trekking is a big tipping point too, despite the booking of the ever-reliable John Allen. The $8.50 is too short for our liking; expect to see her start with a double-figure quote next to her name.

The Leon & Troy Corstens-trained Swats That is as honest as the day is long but could find the Moir Stakes a touch too hard first-up from a spell. Despite placing in the Group 1 Lightning Stakes on February 13 behind Nature Strip and September Run, this looks to be a tougher task considering what she showed for the remainder of her last campaign. She didn’t threaten in the Newmarket Handicap, nor was she a threat in the William Reid Stakes at her last start. This field is similar what she faced in those races, so we expect to see her finish midfield, but there is a Group 1 win somewhere on her horizon.

Can Brooklyn Hustle claimed a Group 1 at the 10th time of asking? Her best suggests she can go close, and her form during the winter points to a strong run in the Moir Stakes. She draws out wide in barrier 10, which is usually not ideal, but the smallish field and hot tempo could see the race run to suit. She hardly saw daylight in the Tatts Tiara in the winter before heading for a spell, but she managed to win in impressive style at both Morphettville and Eagle Farm. If she can see clear air at a crucial time, she could be the one to blouse the leaders.

Ballistic Lover from the Joe Pride stable was a nice winner in the Listed Carlyon Stakes, but that is the highest level she has raced at to date. The Group 1 Moir Stakes is no easy assignment, and despite winning twice in stakes grade in her past three runs, we expect this to be a bridge too far for the Smart Missile mare.

Miss Albania is a $51 chance in the 2021 Moir Stakes, but we think that is a touch generous from Sportsbet. She is a sprinter with plenty of ability, but most of her rivals have her covered with relative ease. She needs to go around with 56.5kg – the same as Group 1 winner September Run – and having finished third behind Ballistic Lover last time out, this looks to be way too hard for Miss Albania.

The Chris Waller-trained Shaquero is a colt with plenty of ability yet continues to surprise at a big price. He has three wins from seven starts to begin his career and was simply too good in the Magic Millions 2YO Classic in January. However, he was extremely disappointing in the Golden Slipper in the autumn, and despite carrying just 52kg on his back here, we expect he will find the 1000m a touch too sharp, especially with the quality of the older horses he comes up against for the first time.

All eyes are going to be on the Mick Price & Michael Kent Jr-trained Profiteer, who returns from six-month spell. The Capitalist colt was sent around as favourite in the Golden Slipper but faded badly over the last 250m. He is clearly the runner to beat with just 52kg on his back and will be the one who sets the speed throughout. His jumpout at Sandown prior to his first-up run suggests he has come back in fine order, but this will be the first time he races against the older horses. If he can handle the pressure, he will be the one to beat, purely because of the weight advantage.

We have no doubt the market will float towards Profiteer, but it is hard to ignore the value that Portland Sky offers at $11. His form reads well, with a Group 1 win in the Oakleigh Plate last campaign and finishing second behind Masked Crusader in the William Reid Stakes. He will benefit from his first-up run behind The Inferno last time out, and with a bit of luck he can salute at a nice price.