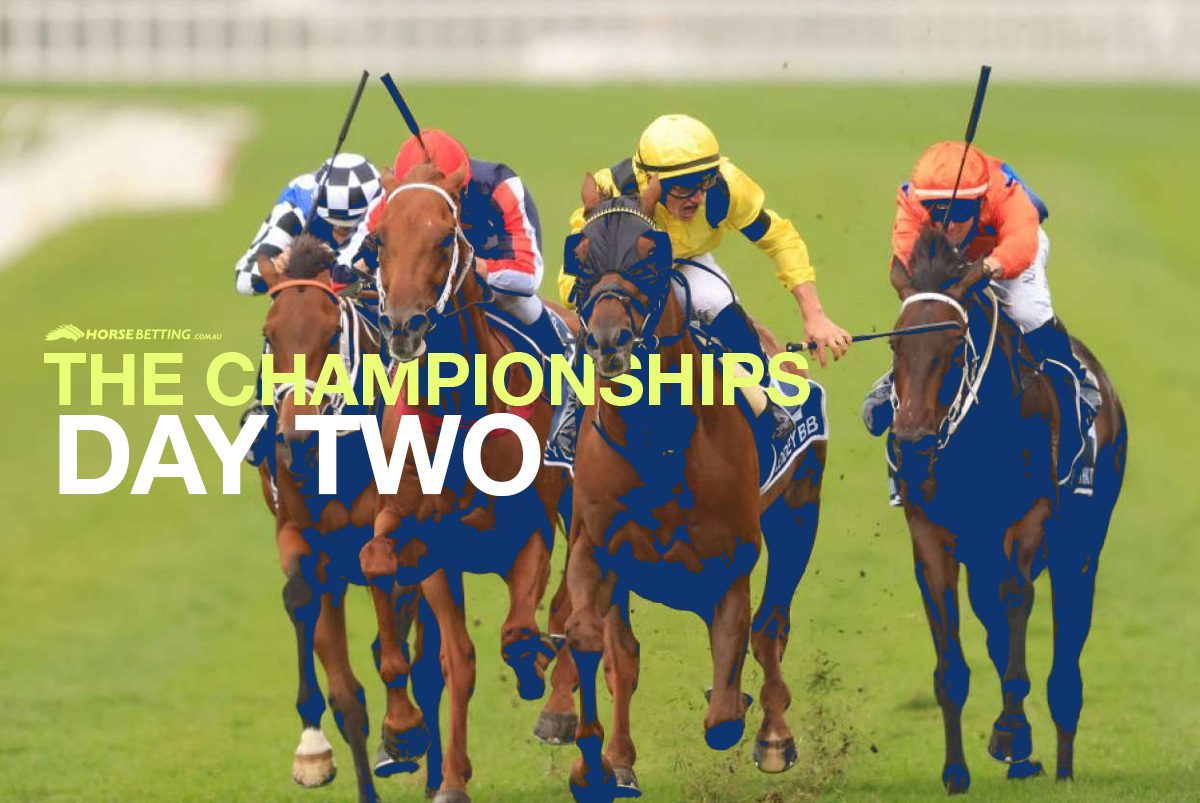 It is Day 2 of The Championships at Royal Randwick on Saturday, with racing fans drooling over a card that includes what can only be described as the race of the decade. Randwick will play host to four Group 1 races – the Australian Oaks (2400m), Sydney Cup (3200m), Queen Elizabeth Stakes (2000m) and Queen of the Turf Stakes (1600m) – as well as the $500,000 Provincial-Midway Championships Final and a pair of $1 million Group 2 races in the Percy Sykes Stakes (1200m) and Arrowfield Sprint (1200m).

If there is any positive to be taken from weeks of consistent rain falling on Sydney tracks, it is that we punters have had plenty of time to figure out which horses are handling the conditions, so the form has been staying relatively true to itself over the Sydney Autumn Carnival. Once again, we are expecting a Heavy 10 track on Saturday, while the rail will be out 4m for the entire course. The first race on Day 2 of The Championships is scheduled to jump at 11:40am AEST.

A small field of two-year-old gallopers will go around in the Fernhill Mile on Saturday to kick the day off, but it is really the sort of race where the smart punter will just sit and watch. Williamsburg and Moko fought it out a fortnight ago in the Baillieu Stakes, and they once again look to be the two. The aforementioned race was run on a bottomless track at Rosehill, and it could be similar case on Saturday. We will just be watching this one.

The field for the second race of the day is quite strong. Some quality three-year-olds make up the final field of 16, while Three Wise Men is the sole emergency in the field for Ed Cummings. We are siding with the top weight in Zethus for James Cummings and Nash Rawiller, who impressed us at the Warwick Farm trials last Friday. The colt by Exceed And Excel will wear blinkers for the first time on Saturday under race conditions, but he trialled them out in his most recent trial which looked to switch him on quite nicely. Having drawn in the middle of the line, Zethus will get a nice run just off the speed and he should be chiming in late where he can make his presence felt.

The $500,000 Provincial-Midway Championships Final is one of the more competitive races of the entire day, with horses coming from right across New South Wales to compete in the Final at Randwick. Given how competitive the qualifying races are, we are generally left with the best of the best in these finals. Tracey Bartley saddles up two chances, including three-year-old gelding Kiss Sum. The son of Shamus Award won the inaugural Four Pillars in the spring against a similar field and has had a brilliant preparation with each run getting better and better. Now fourth-up after running second in the Qualifier at Newcastle behind Geo, Kiss Sum looks ready to peak. With Kerrin McEvoy in the saddle from barrier eight, we believe Kiss Sum can be getting the job done on Saturday for connections.

The first of the $1 million races on Day 2 of The Championships is the Group 2 Percy Sykes Stakes for two-year-old fillies over 1200m. Paris Dior has been well supported since markets first went up and rightly so. The Peter & Paul Snowden-trained filly has had just three starts to date for a win and two seconds, with her most recent start seeing her finish second to Xtravagant Star in the Inglis Millennium (1100m) at the start of February. The daughter of Pierro has looked brilliant in two trials since then, with her most recent being a comfortable win on a Heavy 9 surface in good time. With James McDonald aboard from barrier three, Paris Dior looks superbly placed to make a mess of this field.

Selections:
Next BestParis Dior (#3) $2.40 with Ladbrokes

The $1m Group 2 Arrowfield Sprint has formed into a cracking race, with the addition of In The Congo and Paulele in the past week. Early on, Mazu looked to be a living, breathing certainty in this race, but with some stronger competition in the final field, punters are gifted a mouth-watering clash between some seriously good three-year-olds. We are with the Golden Rose winner who put in a brave placing behind Shelby Sixtysix and Big Parade first-up in The Galaxy over 1100m at Rosehill, so he should be very well suited back to Randwick and out to 1200m with the extra fitness in his legs. The Waterhouse & Bott stable bypassed last weekend’s TJ Smith Stakes with him in preference for this race which is a push in itself, while Tommy Berry’s booking is a very solid move. The son of Snitzel will make his own luck from out in front from barrier six and should prove very tough to run down.

The first Group 1 on Saturday is the Australian Oaks for the staying three-year-old fillies. A capacity field has been assembled, with the race to favouritism an epic battle in itself between Hinged, Honeycreep, Gypsy Goddess and Piny Ivory. Read our Australian Oaks betting preview here.

The Sydney Cup is the feature race over The Championships for stayers, with $2m in prizemoney up for grabs. Read our Sydney Cup betting tips here.

Fillies and Mares will look to add one of the final Group 1s of the season to their CVs before potential stud careers beckon, when they clash in the Queen Of The Turf Stakes over 1600m on Saturday. Read our best bets for the 2022 Queen of the Turf Stakes here.

The girls will once again do battle in the final race of the afternoon, but this time it is over the shorter sprint trip of 1200m. Belluci Babe looks pretty well-placed to return to the winner’s stall just seven days after running out of her skin when fourth in the TJ Smith Stakes at this track and trip. The Bjorn Baker-trained mare finished fourth in The Galaxy at the start prior, and before that she won against her own sex at this course and distance in the Wenona Girl Quality at Group 3 level. With even luck in running under Tim Clark from barrier four, the daughter of Per Incanto can be winning and sending favourite backers out on a high.

Saturday quaddie picks for Day 2 of The Championships