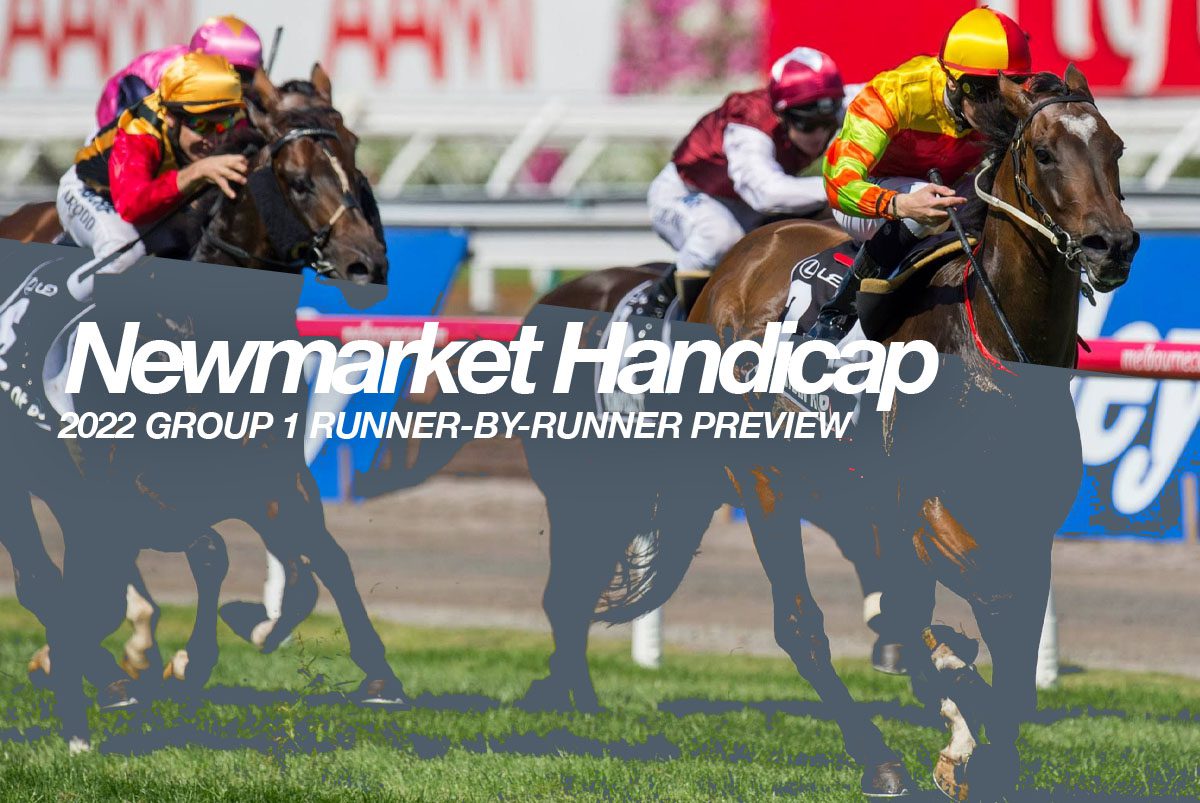 Opening the quaddie at Flemington on Saturday afternoon is the 2022 Newmarket Handicap, a Group 1 affair over 1200m which has attracted a field of 17 sprinters.

Lightning Stakes winner Home Affairs returns to the Flemington straight looking to pick up a third Group 1 on the bounce and has been installed as a $3.60 favourite with online bookmakers.

Considering the nature of the sprinting affair, there is sure to be plenty of speed early on with Home Affairs, Oxley Road and Finance Tycoon all expected to settle on speed.

Reigning William Reid Stakes champion Masked Crusader is set to step up to the 1200m following a midfield finish in the Lightning Stakes. He was always going to find the 1000m too sharp, and his record at the 1200m suggests he should be much better this time round. It was his first defeat going the ‘Melbourne way’, having won all four of his previous starts in Victoria. Having not missed the top two at the 1200m, where he was won five of his seven starts, he will take some beating in this. The query is whether his turn of foot can be as electric as it usually is when needing to lug 57kg and giving weight to his rivals. If Masked Crusader is at his best, he may just blow them away.

Chris Waller and James McDonald will be looking to make Home Affairs the first sprinter to claim the Lightning/Newmarket double since Redkirk Warrior in 2018. He managed to lead the field throughout the Lightning and, despite the best efforts of Nature Strip, was able to hold out the best sprinter in the world by the barest of margins. From barrier 16, J-Mac will look to use the outside rail to his advantage and have this exciting colt bounding along in front. As long as he handles the 1200m, we anticipate he will be too hard to run down. The $3.60 on offer from Sportsbet looks enticing.

John O’Shea and Hugh Bowman swerved the wet ground for the Canterbury Stakes last weekend and decided to bring Lost And Running to Flemington for this. Despite running in The Everest and winning The Hunter, this will be the five-year-old gelding’s first race at Group 1 level. He is a classy runner, but perhaps more so at the 1300m-1400m range, so he may find one or two of his rivals a bit too quick over 1200m. If the speed is too hot throughout, he may just be the one who finishes over the top of a potentially tired Home Affairs. He is a deserving second favourite, but we’re happy to take him on.

Last year’s Newmarket Handicap winner, Zoutori, is back to defend his crown this year. The 2022 edition is much harder than last year’s, and on recent form he is hard to entertain. He only beat one rival home in the Oakleigh Plate and having not won in 12 months, the $51 is an appropriate quote.

The Robert & Luke Price-trained Count De Rupee comes to Melbourne for the first time following an impressive spring campaign. Having claimed The Gong and finishing second in the Golden Eagle, he certainly has the class to be competitive in this. Despite winning four times from six goes at the trip, those wins have been in significantly weaker company than this, so he may find a few of these a bit speedy for his liking. He is a $29 chance, which looks to be the right price, but he will be hitting the line strongly and is one to follow as he steps out to 1400m.

Having taken out consecutive Group 1 races in New Zealand, Levante from the Ken & Bev Kelso yard will be looking to add a third successive win to her name. Having claimed the Telegraph Handicap and then the BCD Group Sprint, the five-year-old Proisir mare comes to Flemington with proven form. Having beaten the likes of Entrievere and Roch ‘N’ Horse (who she meets here) in those starts, she is sure to run a smart race in her first go on these shores. The bay mare has 10 wins from 15 career starts and brings a relative unknown to this considering her NZ form. She will be running on inside the final 200m, so it is just whether her sprint is good enough to match it with some of Australia’s best.

The Robbie Griffiths & Mathew de Kock-trained Halvorsen returns to the Flemington 1200m following a narrow win in the Group 3 Standish Handicap on January 15. With an eight-week layoff between runs, the six-year-old Magnus gelding has clearly been aimed towards this. However, he is yet to run a drum in Group 1 company in three attempts, and we expect that record to remain the same on Saturday.

The one we are giving a big chance at double figures is the Peter Moody-trained Oxley Road. The four-year-old chestnut finished two lengths off the speedy Marabi in the Oakleigh Plate and looked to be doing his best work late over the 1100m. The extra 100m looks to be ideal and the return to the Flemington should prove no hinderance to his chances. He has shown some tactical versatility in leading the field up or just taking a sit off the speed, and with 52.5kg on his back, that may prove the difference in a race like this. He certainly lacks a touch of class on some of his rivals, but what we saw in the Oakleigh Plate is a run you simply cannot ignore. The $21 on offer from Bet365 looks to be a great price for an each-way play.

The fifth-place finish in the Oakleigh Plate was Poland’s best result in some time, but he needs to improve dramatically to be a hope in this. He is set to go around as the rank outsider in the field, and based on prior form, that seems to be an appropriate decision from online bookmakers.

The John O’Shea-trained Quantico ended his spring campaign with three successive victories, including a smart win in the last event on Melbourne Cup Day at this track and distance. This is set to be his first go at Group level, and considering he is fresh from a four-month spell, he may need this run before targeting some nice races in Sydney. He’ll be settling in the second half of the field alongside Masked Crusader and the like, but the query is whether first-up he can match the turn of foot some of his rivals possess.

The Mike Moroney-trained Roch ‘N’ Horse has been mixing her form in New Zealand, and despite taking Levante to narrow margins in two of their last three meetings, her consistency is the issue for us. She looks to be a deserving $61 outsider, but a finish in the top six isn’t completely beyond the Per Incanto mare.

Having not won a race in 18 months, September Run is a shadow of the filly who showed plenty of potential in her three-year-old season. With three wins and a minor placing from seven starts down the Flemington straight, she is clearly a track specialist. However, after a spring campaign where she hit the frame just once in five starts, she is hard to have in the Newmarket.

The Ciaron Maher & David Eustace-trained Snapdancer comes to Flemington following consecutive dominant victories – first at the Gold Coast on Magic Millions Day, then at Randwick in the Triscay Stakes. Both of those wins came when leading the field up and kicking away in the home straight, but with more pressure and tougher opponents in this, she looks up against it. If she doesn’t get an uncontested lead, it is hard to see how she features in the finish.

The Leon & Troy Corstens-trained Swats That was the eye-catcher in the Lightning Stakes when finishing off nicely to run fourth. The three that beat her – Home Affairs, Nature Strip and Eduardo – are world-class sprinters, so we expect a forward showing from the Shamus Award mare once again. Similarly to September Run, she has struggled to live up to what she put forward as a three-year-old, but a replica of her Lightning Stakes run could see her spring a surprise at a big price. We don’t have her in our first four, but you cannot have them all.

The second of the Corstens runners was beaten some six lengths in the Lightning Stakes and looks to be up against it here. It may be a match race between The Astrologist and Poland as to who brings up the rear of the field.

The Anthony & Sam Freedman-trained Artorius is still looking for his first win since claiming the 2021 Blue Diamond Stakes. He was hitting the line nicely over 1100m in the Rubiton Stakes at Caulfield, and considering he goes around with just 51kg on Saturday, he is a genuine trifecta/first-four player. He took Home Affairs to within 3.5 lengths in the Coolmore Stud Stakes at the track and distance during the spring, and considering he gets a 5kg weight advantage on his rival here, he could be the one to blow everyone out of the water. The fact he hasn’t won since February 2021 is the sole reason why we have left him out of our top four.

The Danny O’Brien-trained Finance Tycoon broke the hearts of his rivals at Caulfield on February 26 when leading throughout in the Zeditave Stakes. He will look to do something similar in the Newmarket with just 50.5kg on his back, but this looks to be much harder for him. The lightweight will have him in this for a long way, but the class of some of these sprinters will find him wanting when the whips are cracking.