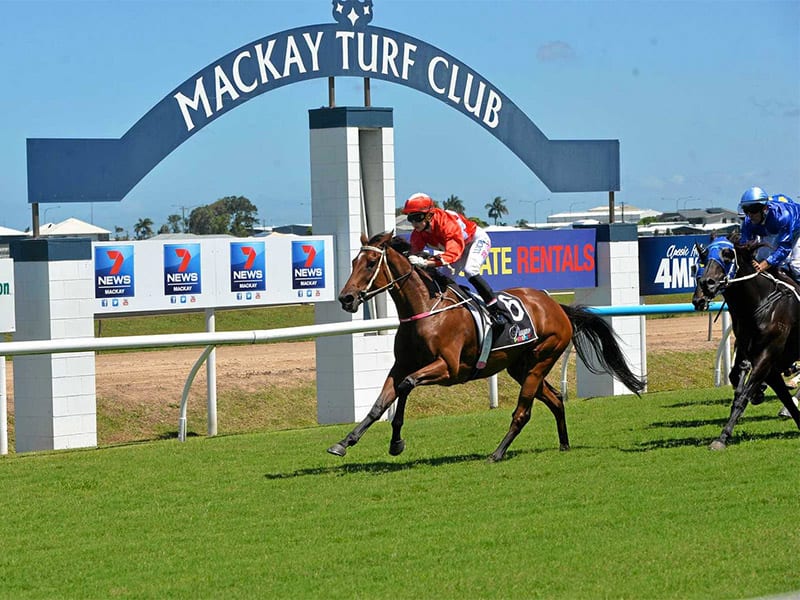 Tuesday racing heads to the Sugar City once again for eight races on a Good 4, with the rail going into the +2m position for the entire course. Race 1 is scheduled for 1:04pm AEST, with the last race set to greet the judge at 5:22pm.

Brad is quickly becoming the punters’ pal in North Queensland, and not just due to his knockabout name. The 5YO gelding has won five of his eight starts since arriving in the hands of Trinity Bannon from the Stephen Hill yard in New South Wales, and now he is shooting for his second hat-trick of wins. He has been a very progressive type, the son of Medaglia d’Oro, going through the grades nicely. He finds himself here in an Open Handicap over 1300m, a distance he was a good winner over last time out. He makes the rise in class from Benchmark 65 level to Open company, but he gets 6kg relief at the weights. Adam Sewell is likely to settle towards the rear from barrier six, but with only eight runners in the race, he should be well within striking distance to beat them again.

Lyle Rowe and Brad Pengelly combine in the opener with 3YO Spirit Of Boom gelding Legal Chance. After running second at this course 10 days ago, he should be ready to go and break his maiden status in a very winnable race. They’ve drawn ideally in gate three, which should allow the experienced hoop to cruise over and take the cold sit on the likes of Palate and Plenty Of Ticker, who are likely to push forward from their wider gates. Legal Chance only just missed in his last outing over 1050m and was winding up very well late, which will suggest he’ll appreciate every bit of the 1200m. Imali looks the key danger after a fast-finishing third at Doomben on Saturday, but the filly will have to overcome the three day back-up and the inside alley which won’t suit her racing pattern.

Johnny Manzelmann has an 11-horse army for Tuesday’s meet, and one runner stands out to us on the four-day turnaround. District managed to run third on Friday at Rockhampton behind Master Jamie, who won the race in track-record time for the 1050m journey. After beginning slowly, Wendy Peel hustled District to go up and sit in the one-one position, where he stuck to the task very gamely in the straight and went with Bold Xavvi the whole way. He also did enough to defeat Jay Jay and stablemate Raiden. The 7YO gelding will be used to a quick turnaround, given this is his 21st start without a spell since February and Mackay is one of eight tracks he has raced at this prep. From barrier two, apprentice Kate Southam can find a position behind what looks to be a hot tempo and finish over the top of them late.