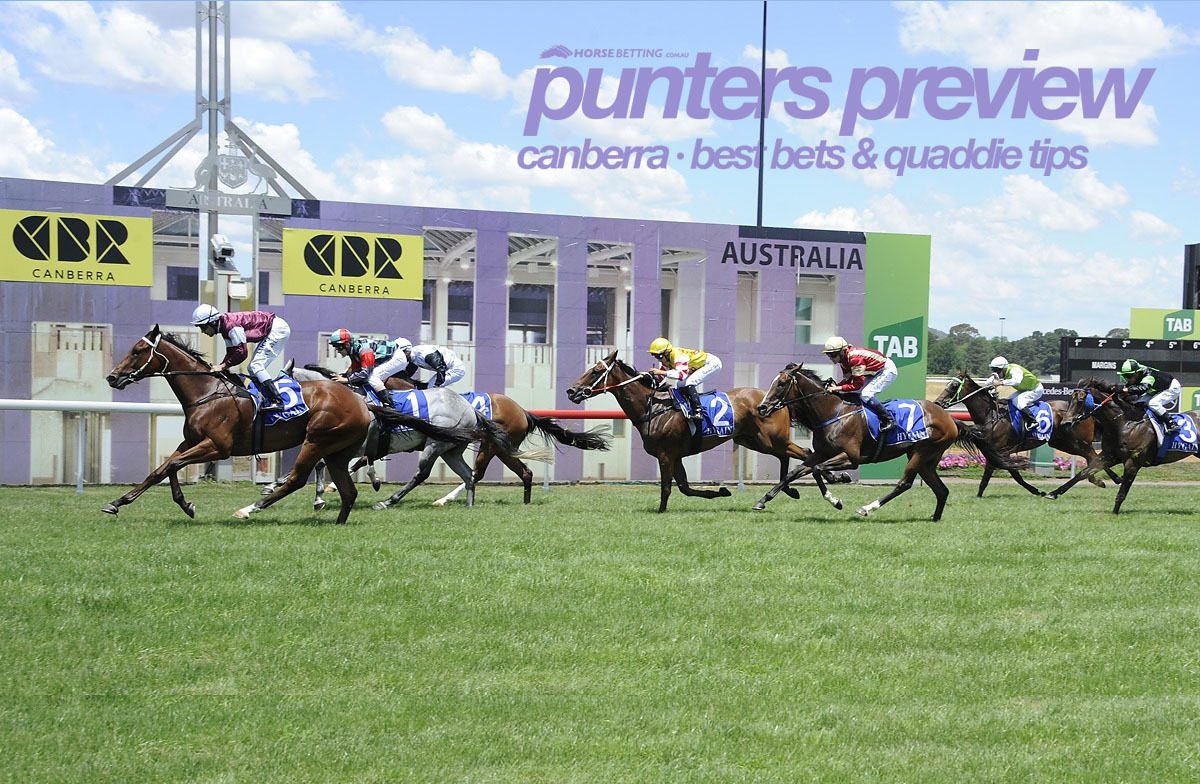 After what shapes to be a cracking day of racing at Canberra on Sunday for the Black Opal, Listed racing returns to the nation’s capital on Monday for the Canberra Guineas and Canberra Cup. HorseBetting’s racing analyst brings you his best bets in the two Listed races as well as his top selections throughout the course of the afternoon and quaddie numbers. The track is rated a Soft 5 and the rail is out 5m from the 1000m to the 380m, while it is out just 3m for the remainder of the course. The first race on Cup Day is set to jump at 1:08pm AEDT, while the Canberra Guineas is the first of our two Listed races which is scheduled to go at 4:10pm AEDT.

In what is a very open betting affair with the bookmakers, we are with the $4 favourite from the Gai Waterhouse & Adrian Bott yard, Silent Impact. This three-year-old son of Maurice does have a few things against him; firstly, he has to carry the top weight of 58kg, and secondly, he has to jump from barrier 17, but we are confident that he is a good enough racehorse to do so. In his three runs this preparation he has not done too much wrong; winning first-up, running second second-up and then going down four lengths to the eventual Randwick Guineas trifecta in the Hobartville Stakes on February 19. Waterhouse & Bott bypassed the Randwick Guineas with the galloper to keep him fresh into this race, which we believe is a winning move. Tim Clark goes back aboard, he will roll forward and be hard to beat.

Five Kingdom was backed as if unbeatable in the Canberra Mile on February 25, and while he didn’t get the job done, he ran a terrific second behind Monegal. Trained locally by Matthew Dale, this seven-year-old steps out to 2000m for the first time since he was narrowly defeated at Kembla Grange on November 20 by The Guru and Shibli after leading most of the race. He got back in the run first-up, but now second-up and drawn far kinder in barrier four, this son of Uncle Mo can go to the front under Sam Clipperton and make his own luck from the top. The fact that he was backed into $5 in the Canberra Mile from double figure odds makes us want to be with him at $19 in a race that should suit him more.

We are going to a serious non-winner for our best of the day, which admittedly is quite worrying, but she has to win one day. The Richard & Michael Freedman-trained Amathuba has had six starts for five minor placings and has gone down at odds of $3 or less in her last three starts. The three-year-old filly by Pride Of Dubai has been getting outsprinted over shorter trips in her three runs this preparation, so now that she finally gets out to 1400m for the first time, she should be hard to hold out. Set to jump from barrier 11, Mitchell Bell will go forward and look for a prominent position on this maiden galloper, and that should be enough to see her salute for the first time for her patient owners. If she is going to win a race, it will be this one.

One horse that doesn’t have any problems with winning is the Keith Dryden-trained four-year-old Fangela. The gelded son of The Factor has won three of his six starts, including a brilliant win in Benchmark 66 company at Nowra on February 13 in his last race start. That was over 1000m and he carried 59kg, so Dryden has kept this grey galloper over the short trip and opted for apprentice hoop Molly Burke who can claim 3kg, getting this gelding’s weight down to 58.5kg which is a big relief from the 61.5kg he was allocated. She should not have to do too much riding from barrier five, so hopefully Fangela can get into a sweet spot and be too good yet again.

In the third race of the afternoon, Ed Cummings and Josh Parr combine with four-year-old gelding Adamas Prince in a Class 2 over 1200m. the four-year-old gelding does have to carry the top weight of 60.5kg, but he has been racing well enough of late to warrant being allocated that weight. The son of War has been in the minor money in his two runs back at Gosford in Benchmark 64 and Benchmark 68 races, so he should appreciate coming back in grade to Class 2 company at country level. In August last year, Adamas Prince finished third behind Toomuchtobear at Newcastle, and that runner is the favourite for the Canberra Cup later on in the afternoon. Now third-up, this horse should be fit enough to give a bold sight over the 1200m, provided Parr can slot in somewhere from barrier 10. He looks a good each way play.