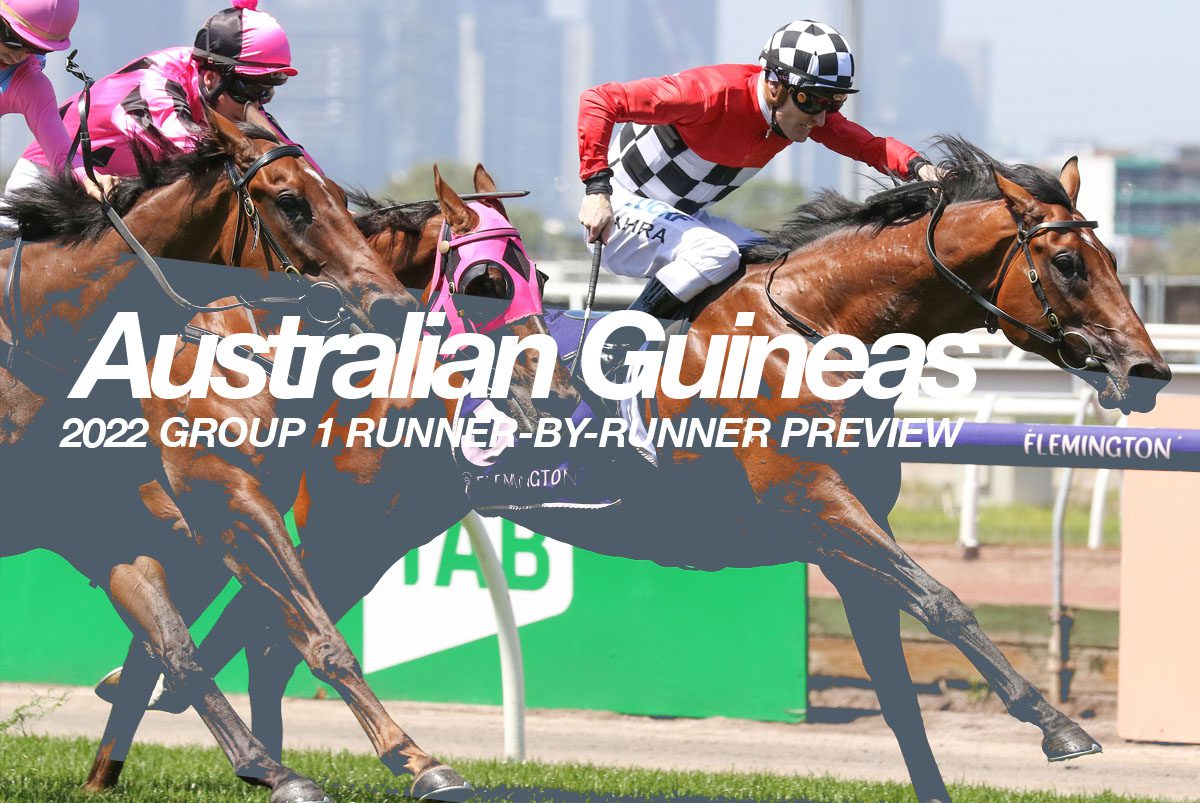 The 2022 Australian Guineas (1600m) at Flemington has attracted a capacity field of 16 three-year-olds headlined by Group 1 winners Hitotsu ($4.60) and Profondo ($5), with online bookmakers struggling to split the two market leaders. Captivant ($7) and Pinstriped ($9) are the only other runners in single figures, with only a few given a hope at a double-figure quote. Lunar Fox saluted in this race last year paying upwards of $151, so anything is possible.

The 2021 Victoria Derby champion is back following a spell in the paddock since his famous Group 1 win. On that day, Hitotsu managed to land a plunge for punters who had backed him in from double figures earlier in the week. That was over 2500m when third-up, and prior to the race he had only a Donald maiden to his name from five career starts. In our opinion, it wasn’t the strongest VRC Derby and this race looks to be a lot harder for Hitotsu, who no doubt wants further than the mile. He has plenty of upside, but we expect a bigger price than $4.60 for the Ciaron Maher & David Eustace runner by the time the barriers open.

Peter & Paul Snowden went within a nose of claiming Group 1 success with Revolutionary Miss last weekend in the Blue Diamond Stakes and will look to go one better with Captivant here. Having gone within a half-length of Anamoe in the Caulfield Guineas in the spring, the Capitalist colt has warmed up nicely for this with a third-place finish in the CS Hayes Stakes behind Pinstriped. He was doing his best work late over the 1400m in that and will appreciate getting to the mile third-up. He is already a Group 1 winner at the mile, having taken out last year’s Champagne Stakes, and is a serious contender on Saturday.

Profondo, the Spring Champion Stakes winner, is back for a crack at it in the autumn and seems well-placed off a five-month spell. The Deep Impact colt is yet to compete at the mile, but he looks to have plenty of upside and is deservingly one of the top fancies. He makes his own luck up on speed, and to win from barrier 15 he will need to be just as classy as he looks. With wins at 1400m and 2000m in his three-start career, he has shown he has a sharp sprint when asked to produce. With a few of his rivals preferred at 1600m, he might find this a touch sharp; however, he may just win this on talent alone.

There is no doubt that the Trent Busuttin & Natalie Young-trained Forgot You was the eye-catcher in the CS Hayes Stakes when finishing fourth. He is a two-time Group 2 winner and is certainly capable of taking out a race like this. However, the stable have signalled their intent on getting the colt to the Australian Cup next week, so perhaps that’s where we need to back him? That said, he is a $12 chance in this for a reason, as his turn of foot is one that his rivals may not be able to match. He’ll be hitting the line hard late – it is just whether he is within striking distance at the clock tower.

He finished second to Hitotsu in the VRC Derby in the spring, but Alegron from the Godolphin yard is set find the 1600m too sharp. He struggled in the CS Hayes Stakes, so perhaps 2000m third-up looks more his go?

The Chris Waller-trained Coastwatch is coming off a narrow win in the Group 2 Autumn Stakes. In his career thus far, the Fastnet Rock gelding has shown to be tactically versatile – which he will need to be, having drawn the carpark. He narrowly defeated a weaker field than what he strikes on Saturday, and we anticipate a midfield finish for Coastwatch, who is also accepted in the Randwick Guineas.

The Peter Moody-trained Lightsaber was basically a non-starter in the CF Orr Stakes three weeks ago and is set to enjoy coming back to his own age group. He missed the jump badly in the weight-for-age contest and was simply never going to threaten. Prior to that he was beaten 3.5 lengths by Marabi in the Australia Stakes, and stepping up to the mile looks more his go. His lone start at 1600m was in the Caulfield Guineas when finishing fourth to Anamoe and Captivant. He looks one of the key speed influencers as long as he jumps smartly from the barriers, and if he can see out a strong mile, he is certainly a first-four player.

Ranch Hand is another who is accepted in the Randwick Guineas, and it would surprise us if he goes around in this. He is hardly a winning chance over the mile against some of his rivals, and considering he holds a nomination to next week’s Newmarket Handicap, where he would go around with 50kg on his back, that looks more his go.

Having been a smart winner in the CS Hayes Stakes in the leadup to the Guineas, the undefeated Pinstriped looks the one to beat. The way he knuckled down inside the final furlong on that day to run down Pascero showed the world his ability. It also showed he’s screaming out for further, considering he was doing his best work on the line and won going away from a handy field. From barrier 11, Michael Dee will need to have the Street Boss colt settled in the second half of the field, but this chestnut is more than good enough to overcome a sticky barrier draw. His turn of foot is electric, and we expect he will hand Enver Jusufovic his first Group 1 as a trainer and Dee a second consecutive win in the race. The $9 on offer from Sportsbet is too good to ignore.

The Emma-Lee & David Browne-trained Rhinoceros is deemed one of the rank outsiders of the field, and for good reason too. He beat just two runners home in the CS Hayes Stakes and is set to struggle in a field like this.

The Mitch Freedman-trained Spirit Of Gaylard is a runner with plenty of upside, but he is screaming out for 2000m and beyond. He ran to within 2.65 lengths of Forgot You in the spring before coming out and winning the Listed TAB Trophy on Melbourne Cup Day. He has the class to take out a Group 1, but we don’t think it’ll be in the Australian Guineas.

The Julius Sandhu-trained Sharp Response was hitting the line nicely in the Autumn Stakes behind Coastwatch last time out when finishing fourth and should appreciate the step up to 1600m. However, this looks to be a touch out of his grade at this stage of his career. Look for him to be hitting the line well but ultimately finishing midfield.

Coming out of a midweek Sandown maiden into a Group 1 is a brave move for most runners, but the Matt Brown-trained Prix De Turn is set to do it for the second time in his career. Having flashed home late on debut, Prix De Turn finished seventh in the Caulfield Guineas at just his second start. This time around, he is coming off a maiden victory over 1500m where he absolutely destroyed his rivals. We’ve seen worse $51 shots going around; we could easily back this guy to finish top three.

Zerelle from the Busuttin & Young stable has strung together consecutive victories at much weaker level than what he contests on Saturday. He looks set to get trapped three wide without cover from barrier 17 and will find this much tougher than what has been competing in recently. The $81 is an appropriate price.

Pascero is coming off a second-place finish in the CS Hayes where he simply didn’t see out the full 1400m, curling up inside the final 100m and allowing Pinstriped to fly past him inside the final 50m. He looks to be one of the key speed influences in this and will need to go to a whole new level if he is to claim Group 1 glory. He is currently $17 with Ladbrokes at the time of writing, and we expect that price to blow out as we get closer to the jump.

The Kevin Corstens-trained Bon’s A Pearla is the sole filly in the Australian Guineas field, and so far this campaign she has struggled to make much of an impact. She draws barrier 13 – the same draw she got stuck with in the Thousand Guineas in the spring, where she got trapped and was beaten a long way from home. This is much harder than that and she looks to be up against it.

Even despite being the first emergency, the Bjorn Baker-trained Maurice’s Medad looks to be up against it on Saturday. With just one placing from three starts at the mile, the Maurice gelding looks more suited to the 1200m-1400m and will need to produce a new career peak if he is to threaten in the Group 1.

The Nathan Dunn-trained Corona Lad was beaten a fair margin in the CS Hayes Stakes. Despite gaining a run in the one-one throughout, he watched many of his rivals who he meets on Saturday fly past him. If he gains a start, we would be surprised to see him see out a strongly run 1600m.