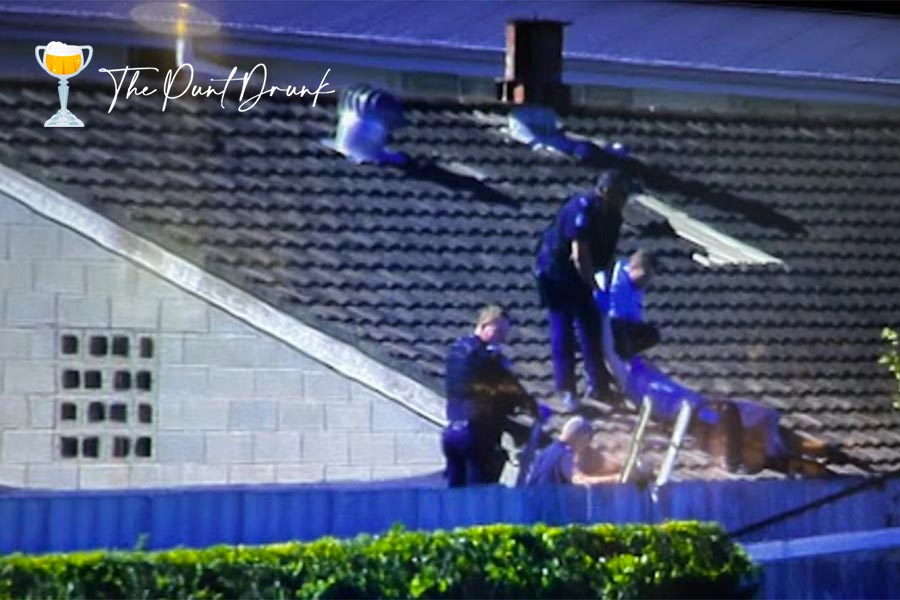 How is it only Friday? This week seems like it has dragged on for a while, but that could be due to the amazing things happening in the racing world. When we say ‘amazing’, we aren’t talking about beautiful, heartfelt moments; we are meaning more along the lines of ‘holy shit, that’s amazingly funny’. From a police pursuit at Doomben, another F-bomb from a trainer on live tele and a textbook Nash Rawiller steer, this week had it all.

A lot of us have our favourite spots to watch races when we are at the track. Personally, the grand stand at Eagle Farm is the go-to spot to cheer home a runner, while others like watching it on the screen downstairs, and some hang over the running rail to really get a feel for the horses galloping past in the home straight. For these two, the roof of a neighbouring stable was the place to be.

While we can see the funny side of two car thieves trying to get away from police, the young crims did force a delay at Doomben on Wednesday, forcing all races to go back one. After jumping the fence of the motorway, the pair run along the back straight before jumping onto the roof of a stable block at about the 900m mark. Maybe they were just trying to get a good seat for race two.

Someone getting arrested at Doomben at the top of the stables at the 900 meter mark due to someone stealing a car and tried to escape pic.twitter.com/mI92gemmM6

Last week it was Lucy Warwick, this week it was Jim Lake. You’d think these racing participants would learn that when the camera is rolling, be on your best behaviour. Lake was being interviewed after winning a race at Warracknabeel on Monday – his first win since last September – and clearly the excitement, or lack thereof, got the better of him. Halfway through the interview, Lake’s phone started ringing, and it is fair to say he didn’t want to answer it. This might never get old…

Who would be ringing Jim Lake after winning a race today at Warracknabeal? No 7 second delay @Racing ! #language! pic.twitter.com/G1RXu7d7ih

THE FENCE WAS HOT

Nash Rawiller’s winning ride aboard Think It Over in the 2022 Queen Elizabeth Stakes will go down as one of the best in history, but his win aboard Atlantic King at Warwick Farm on Wednesday was right up there as well. It was only a midweek benchmark race, so the excitement levels and hype were not the same, but the quality of the ride was elite. After jumping from a wide gate, Rawiller took the $25 shot to the outside rail along the back straight and never looked like getting beaten. The Matt Dunn-trained gelding rolled along and put his rivals to the sword.

Split screen vision of @nashhot's scene stealing ride on @mattydunnracing's Atlantic King at Warwick Farm. The stewards footage (below) illustrates Nash's every move as he charted a course to victory. @tabcomau @7horseracing pic.twitter.com/6pCpjjPPHG