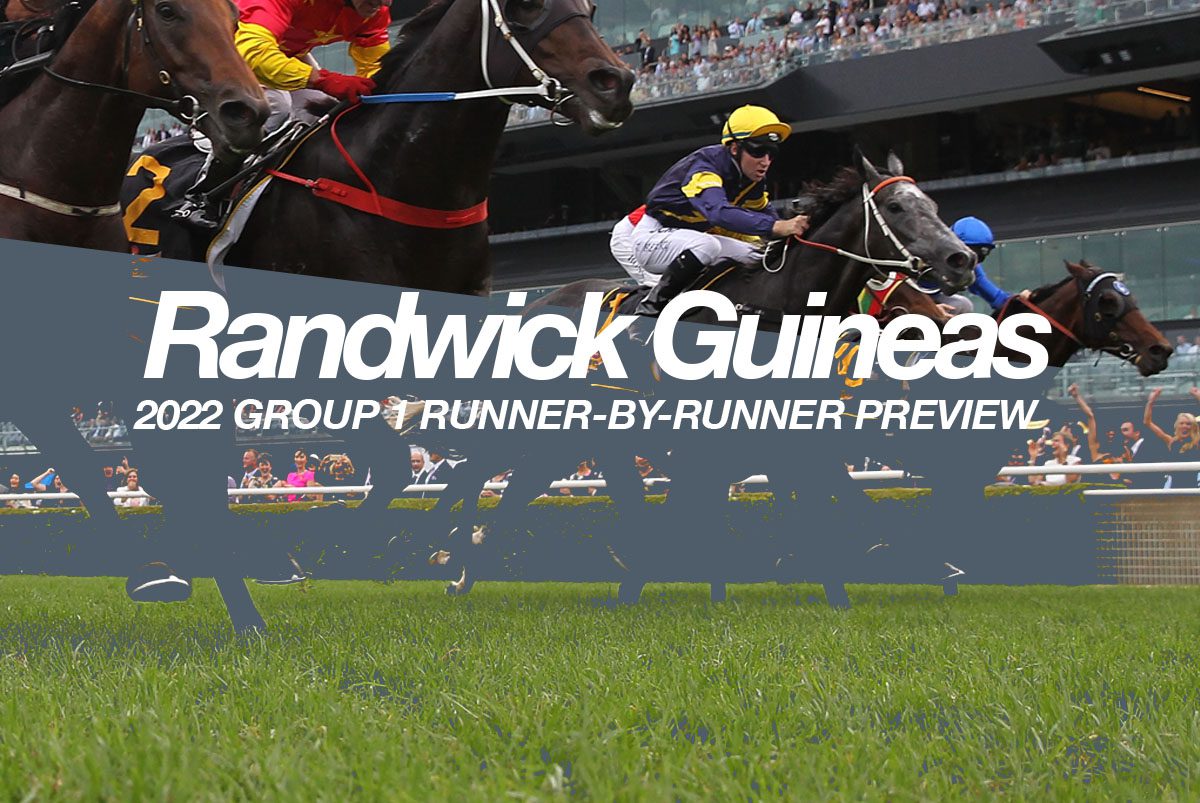 The 2022 Randwick Guineas has attracted a solid field of 13 three-year-old colts and geldings, headlined by Group 1 winners Anamoe and Converge. This year, the race falls on the same day as the Australian Guineas at Flemington, so there are a number of dual-acceptors, which adds some more intrigue for those who want to bet early.

Anamoe is the $2 favourite for James Cummings, while Converge and Hilal sit on the second line of betting at $6 apiece. Those three horses are the only runners in single figures, before it goes out to War Eternal ($13), Forgot You ($16) and Ranch Hand ($17). Military Expert and Sword Point look to be the leaders on paper, while War Eternal and Royalzel have been known to show some speed.

The hot favourite for this years’ running of the Randwick Guineas is the James Cummings-trained Anamoe, and rightly so. The three-year-old son of Street Boss won the Caulfield Guineas in the spring, before going on to finish a narrow second in the Cox Plate, beating home the likes of Verry Elleegant and Mo’unga. First-up, Anamoe can be forgiven for running third over 1200m on a leader-ish track at Rosehill, but he sensationally bounced back over 1400m in the Hobartville Stakes last start, defeating Hilal and Converge, who both look to be his main rivals on Saturday. The 1600m will suit, James McDonald goes back in the saddle, and they should get plenty of cover from barrier nine to save him for one last shot at them. He is yet to see a genuine heavy track however, which could be the only knock.

The only other Group 1 winner in this field is the Waterhouse & Bott-trained Converge. This gelded son of Frankel won the J.J. Atkins at Eagle Farm back in June, proving far too good for his rivals over 1600m on that occasion. Converge failed in his only run of the spring when eighth behind Anamoe in the Run To The Rose (1200m), but he appeared to have come back well in his two trials and two race starts, where he has finished third both times. He is a Group 1 winner at the mile, so he should relish getting out to this trip now, while barrier six is ideal. Under his regular rider, Tim Clark, Converge is the danger to Anamoe.

Hilal really served it up to Anamoe in the Hobartville, getting within half a length of the star three-year-old in what was arguably the inferior ground along the inside. The son of Fastnet Rock has a brilliant record at Randwick, winning two and placing second three times from his six starts at the track, while he has never been out of the quinella at this track and distance, winning the Bondi Stakes in October and finishing second in the Group 1 Champagne Stakes last autumn behind Captivant. William Pike will do the steering once again, so that is certainly advantageous, while barrier four should see the duo settle down just behind the leaders. The genuine heavy track is the concern though, but he has run well in all five soft track runs.

The first of Chris Waller’s three runners in the race is Coastwatch, who was an impressive first-up winner at Caulfield on February 12. The son of Fastnet Rock resumed in the Autumn Stakes over 1400m and was able to sustain a good run to just hold on from the fast-finishing Burning Power. Waller is yet to book a jockey for Coastwatch and the gelding is accepted in the Australian Guineas at Flemington as well, so he does look unlikely to line up in this, however he has drawn barrier 18 at Flemington and he is two from three on rain-affected tracks, so we wouldn’t be too surprised to see Australia’s leading trainer change his plans between now and Saturday. He could be a genuine place chance if he were to line up.

Forgot You is another galloper who has accepted in this race and in the Australian Guineas on Saturday, but there are a few murmurs that he will head to this race as opposed to staying in Melbourne. The son of Savabeel caught the eye late in the Group 3 C.S. Hayes Stakes at Flemington over 1400m on February 19 in what was a distance short of his best. Forgot You is on an Australian Derby campaign, so he is likely to be warming up late again, just like he did when sixth behind Anamoe in the Caulfield Guineas. The colt is a winner over 1500m on a Soft 7 and he won the Moonee Valley Vase over 2040m on a Soft 5, so the wet track shouldn’t be a problem for Forgot You. He wouldn’t shock us if he wins.

It would appear that Chris Waller is being a bit coy in regards to which of his horses will be racing where this weekend. Like Coastwatch, Rand Hand is yet to have a jockey assigned and he does have a spot in the final field for the Australian Guineas, although he doesn’t have a jockey booked there either. The colt by Fastnet Rock was impressive first-up splitting Paulele and Converge in the Eskimo Prince Stakes, before he looked to be outstayed over 1400m in the Hobartville Stakes on February 19. Ranch Hand has some serious Group 1 form, but most of it is over shorter sprint trips, so we are a tad surprised to see him on a Guineas path. The colt does hold a nomination for next weekend’s Newmarket Handicap where he has 50kg, so if it stays wet in Sydney, we wouldn’t be surprised to see him back to 1200m next Saturday.

Annabel Neasham saddles up Military Expert in the Randwick Guineas on the back of an impressive romp in a Benchmark 72 Midway Handicap on February 19. The son of Redoute’s Choice couldn’t have been more impressive winning on that occasion over 1500m on a Soft 6 track, and with two other runner-up performances on rain-affected going, we have to assume he will appreciate give in the ground. Neasham has placed this three-year-old quite well throughout his career, which has seen him miss the placings only twice, while he has never been beaten more than three lengths. He has been on an unconventional path towards this race, but he is seemingly going well and we cannot doubt the Neasham yard. One for wider exotics.

The David Payne-trained Raging Bull is an out-and-out stayer who will be much better suited over much further than 1600m. The son of Bull Point was only plain first-up over 1400m in the Hobartville, so he would need to improve plenty if he is to turn the tables on some of those horses over the mile. Raging Bull did run fourth in the Victoria Derby in October, while he finished sixth behind Profondo at the start before that. He has ability, but we want him over 2000m and beyond.

Another horse without a jockey yet is Gary Portelli’s Royalzel. The colt by Snitzel did not beat a runner home first-up in the Hobartville, which came on the back of beating only one runner home in the Eskimo Prince when first-up. The horse is better than that though, winning at Listed level at Flemington over 1600m in July by three lengths, before winning a Midway at Kembla Grange and then placing third to Giannis in the Dulcify Stakes in Listed company. He is unbeaten from two starts on heavy ground, so that could be the spark up this galloper needs. Needs to improve though.

War Eternal burst onto the scene with an impressive 2.4-length win at Rosehill Gardens on February 19, albeit in a Benchmark 78, but he won in fine style. The son of Pierro is a winner on heavy ground, while he finishing second in his only other heavy track start behind Dragonstone. In his eight starts, War Eternal has only really faced this type of opposition twice, finishing seven lengths off Mazu in the Brian Crowley Stakes in October, before being beaten five lengths by Paulele in the Eskimo Prince first-up this preparation. He will get a good run in transit from barrier two under Jason Collett, but we can’t see him troubling some of these.

Chris Waller is yet to appoint a jockey for Sword Point yet either, but Kathy O’Hara did ride the colt to victory last time out, so she would be stiff to lose the ride in a Group 1. The son of American Pharoah has only had six starts, winning twice and finishing second once, all of which have been done in his three runs this preparation in much weaker grade. On January 15, Sword Point romped in over 2000m at Rosehill by four lengths when leading all of the way, so he should be fit enough to come back to the mile and handle the heavy conditions. He could give a sight from in front.

One horse who we think can run a bold race is the Gerald Ryan & Sterling Alexiou-trained Sinba. The son of Xtravagant has won three of his five starts and is now shooting for three straight wins after good wins at Newcastle and Randwick-Kensington. His win on the Kensington course was ultra-impressive, racing away to win over 1550m by two lengths in Benchmark 72 company. The gelding’s maiden win came on a Soft 6, while his other two soft track runs were as a two-year-old and he seemed to handle it fine. He will get back from barrier eight under Jay Ford and come out to the crown of the track, which could be the place to be by this time in the afternoon. Sinba is a live player in this race.

The rank outsider in this field is the Bjorn Baker-trained Sea Treasures. The son of So You Think has won just the one from five, and that came at Mudgee when sent out as a $1.80 favourite on a Soft 7 in August. He closed off well at Kembla Grange on February 22, but that was in a very weak Benchmark 68. We’d be astonished if this horse caused an upset,