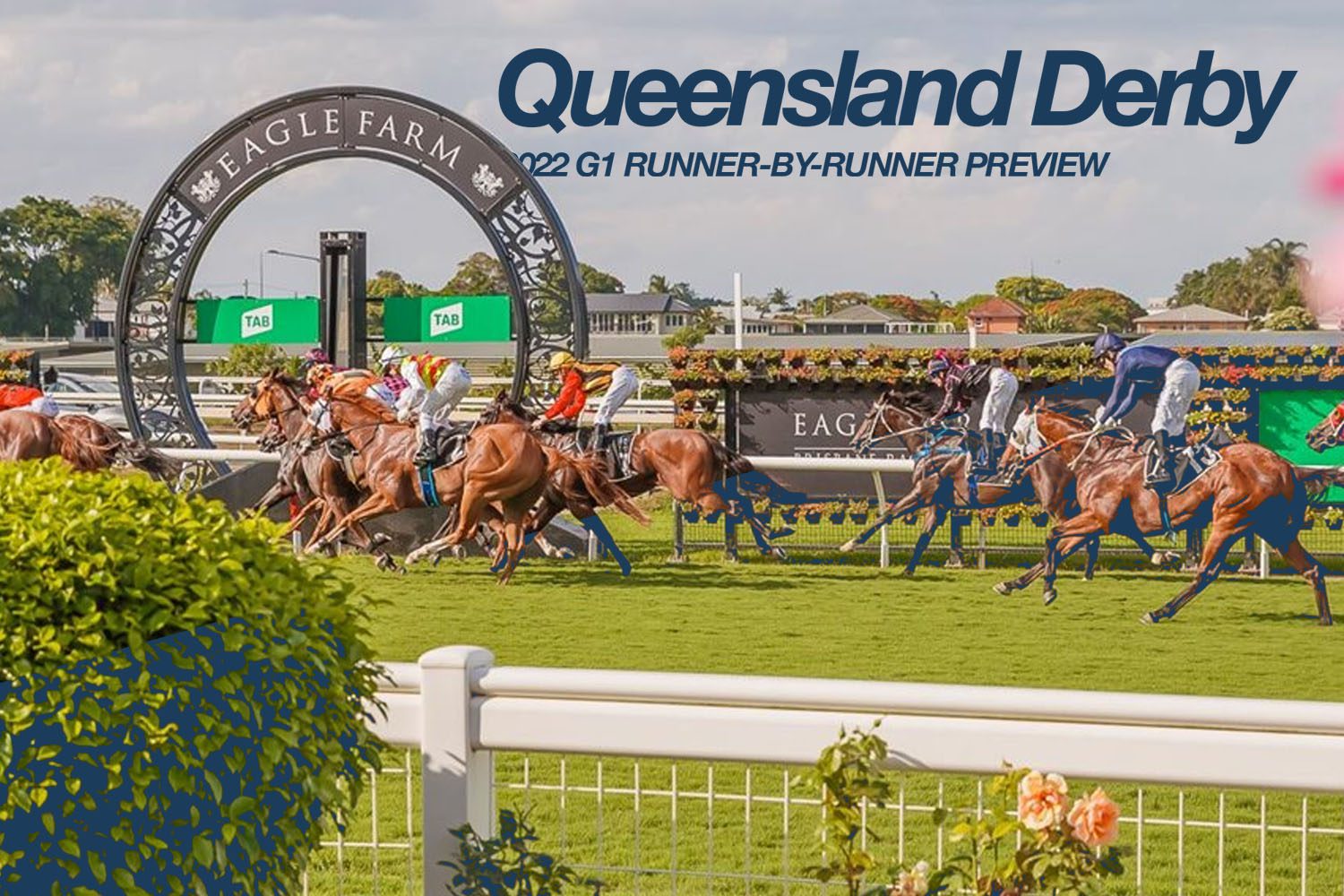 A capacity field of 18 three-year-olds (plus three emergencies) has been assembled for Saturday’s Group 1 feature at Eagle Farm – the $1 million Queensland Derby. Run over 2400m, the Derby is the ultimate test for emerging stayers, with champions like Shootoff, Eagle Way and, more recently, Kukeracha winning this race.

Chris Waller already has two Queensland Derbies under his belt, and he heads into the 2022 edition with a five-horse charge that includes market fancies Paternal ($6) and Caboche ($8). The one to beat, according to the bookies, is last-start Rough Habit Plate (2143m) winner Dark Destroyer ($4.40), who has had a very similar preparation to last year’s winner, Kukeracha.

New Zealand is very well represented, with the favourite among the quartet of Kiwi runners. Rounding out the four runners in single figures with Ladbrokes is Pinarello ($9), while Tutukaka ($26) and Nest Egg ($61) are considered outsiders.

It will be interesting to see where the speed comes from – it certainly isn’t lacking – but these horses have somewhat shared the lead role over the past couple of starts. Satirical Glory ($34) and Menazzi ($17) were prominent last start in the Rough Habit, while Sea Treasures ($15) led at Rosehill on Saturday. Dark Destroyer has been handy in his past couple of runs, and given he has drawn barrier one, we expect him to be up there again. Global Ausbred ($13) and Anythink Goes ($34) have also been most effective when able to lead. It’s an intriguing race, and we look forward to seeing how it plays out.

Continue reading for HorseBetting’s runner-by-runner preview and $100 betting strategy for the Queensland Derby.

Despite being a Kiwi, Tutukaka’s only two wins have been on Australian soil. The son of Tavistock won his maiden at Eagle Farm as a $1.45 favourite in the Listed Tatts Stakes (1830m) 11 months ago, while he was also a dominant winner of the Listed Geelong Classic (2000m) in the spring, before running sixth in the Victoria Derby (2500m). We’ve not really seen the best of him since then, but last start in the Rough Habit Plate he was winding up late, so the rise to 2400m will no doubt be to his liking. He’s one of the better double-figure hopes.

The second horse in the form guide is the race favourite, Dark Destroyer. The Lance O’Sullivan & Andrew Scott-trained son of Proisir just has ‘Derby’ written all over him, so he is a deserving favourite in our book. In New Zealand, the gelding won the Group 3 Bonecrusher Stakes (1400m) en route to winning the Group 2 Auckland Guineas (1600m) in what was his final start on home soil. Since being in Australia, this horse has done absolutely nothing wrong; he finished midfield first-up in the Daybreak Lover (1400m), then ran brilliantly in the Queensland Guineas (1600m), before winning the Rough Habit Plate (2000m) on May 14 in gritty style. He won’t have to do any work from barrier one under Sam Weatherley, so we expect him to be hitting his top at the furlong pole and fending off his rivals over the concluding stages.

If you backed Caboche last start at Scone, like we did, don’t watch the replay unless you want some serious PTSD. The horse trucked up, hit the front and looked to sprint clear, but somehow Bonny Ezra fought back and got the nose down where it mattered. The Chris Waller-trained son of Vadamos was fair in the summer at this track when fourth to Gypsy Goddess in the Grand Prix (2200m), but Balmaurice ($201) beat him home by about five lengths, so we can’t quite work out how he is single figures here. J-Mac tax?

Menazzi caught a lot of people off guard in the Rough Habit, sustaining a wide run and still being there at the finish. The Stuart Kendrick-trained gelding ended up running third, beaten less than four lengths, but he looked like he was coming to the end of his run, so the 2400m might be a stretch. Nash Rawiller will rate him well from in front though.

Had you have asked us a month ago who we liked in the Queensland Derby, Pinarello would have been our answer. The son of Tavistock is bred to be a Derby horse, and we saw that to some extent when running a good fifth in the New Zealand Derby (2400m). He then won the Trelawney Stud Stakes (2100m) in a canter at Pukekohe on April 23, with trainers opting to come into Saturday’s Group 1 off a one-month freshen. He was meant to start in the Rough Habit, but the downgrade of the track led to his scratching on race morning. Had he have had that run, we’d be giving him serious thought.

Red Wave was beaten nearly five lengths on Saturday night in Toowoomba as an odds-on favourite in a Benchmark 70. His form prior is not good enough to see him figure.

Southern Stock did exactly what you would want to see in the final lead up to a Derby when flashing home into fourth in the Rough Habit Plate a fortnight ago. The Chris Munce-trained son of Tavistock has the miles in his legs to see out the 2400m for the first time, while he is bred to get the trip on his ear. Barrier 19 is awful, though, with Larry Cassidy forced to show his hand early from out in the cheap seats. If he can slot in midfield somewhere without doing too much work, he will be in the finish somewhere.

We mentioned earlier that we didn’t think Balmaurice was a $201 chance, but at the same time we can’t really see him figuring. The son of Maurice was fair at the end of the Rough Habit a fortnight ago, but the margin was still 10 lengths, so he will need to improve drastically to be winning this.

We had Sea Treasures penned as just no good after his run two starts ago when beaten out of sight at Wagga, but his run on Saturday at Rosehill Gardens was actually very good behind Aravene and Ting Tong ($11). The Bjorn Baker-trained son of So You Think might just be an out-and-out stayer, with his best runs being his Class 1 win over 2300m, an Australian Derby (2400m) fifth-placing and his third on the weekend over 2000m on a Heavy 9. Rachel King is likely to send him forward from barrier 14, and if he can really run them along, he might be a major player. This is certainly easier than the Australian Derby.

Satirical Glory was terrific in the Group 1 Spring Champion Stakes (2000m) when fourth to Profondo in the spring, but he’s seriously lost a leg since then. His run last start in the Rough Habit was too bad to be true, and the $34 looks a mile unders.

Paternal is an interesting runner and second only to Dark Destroyer in the market, so we have plenty of respect for him. The Chris Waller-trained gelding is bred to be a Derby horse, by Savabeel out of an O’Reilly mare, so he will stay all day long. This galloper was well supported in the Group 2 Tulloch Stakes (1850m) at Newcastle in March, but he couldn’t have been more plain, finishing 150 lengths back in last. Obviously, there were some issues there, so a trip back to the trials rejuvenated him somewhat, as he ran fourth in the Group 3 Packer Plate (2000m) and then a very encouraging second to Dark Destroyer in the Rough Habit a fortnight ago, where he was in the better ground along the inside fence. Waller used the Packer Plate and the Rough Habit as the two lead-up runs for last year’s Queensland Derby runner-up, Senor Toba, so we expect this horse to be primed for Saturday.

Ed Cummings and Joshua Parr have been a force to be reckoned with over the past six months thanks to Duais, but Dark Rebel has a very long way to go if he is to reach that mare’s heights. He needs to improve drastically from his Rough Habit run if he is to be competitive in this.

Global Ausbred is a bit of a left-field starter on Saturday, coming out of a Newcastle Benchmark 64 over 1870m on May 14. The Brad Widdup-trained colt has won three of his past four starts, all by convincing margins. Four starts ago, he beat subsequent five-length winner Funambulist by 1.25 lengths, while last start he led all of the way and defeated fellow Queensland Derby runner Anythink Goes by two lengths. He is the likely leader in the race, so we expect him to show plenty of cheek, but his form in lower grades has to be a genuine query.

Michael Costa is coming near the end of his time training in Australia before he moves to Dubai, so we have a feeling that his last few runners will all be primed to win their respective races. Impel Gazelle was good when winning his first three starts at the Gold Coast, but he was found to be slightly outclassed in the Rough Habit Plate when running fifth, some eight lengths behind Dark Destroyer. Barrier 15 is certainly a sticky alley for a horse who tends to race in the first half of the field, so we would be surprised if he won.

Anythink Goes was dominant two starts ago when a five-length winner, but it did come in a mere Class 1 at Gosford, so we don’t see how that form can be too strong. Last time out at Newcastle he chased home Global Ausbred, but he wasn’t good enough to reel in the two-length margin. This looks too difficult.

Based on Nest Egg’s sixth in the New Zealand Derby earlier in the year, you would have to think he would be a chance in this; however, in two Australian starts, he hasn’t really done too much. The grey son of Reliable Man has been beaten a fair way in Benchmark races in Sydney behind some pretty slow ones, so a good showing on Saturday would shock.

Rounding out the field of 18 is another from the Chris Waller yard in Villaden. The son of Tavistock brings up some decent Victorian form without it being sensational, so we expect he will need to improve a bit to win this. Waller did send this guy around last Saturday at Flemington over 2000m, where he did his best work late to run fourth, so the 2400m will be advantageous.

The first emergency in this year’s Queensland Derby is the Waller-trained Turn Me Over. The son of Turn Me Loose was good when winning back-to-back races at the Sunshine Coast and Gold Coast in April, but he didn’t handle the Polytrack at the Sunshine Coast last Wednesday when beaten 6.6 lengths. He’d need to lift.

Velvet Lady is the only filly in the field, so she will get the 2kg advantage at the weights, but her form suggests she would need a little more than that. Also coming through a run on the synthetic track last Wednesday, the daughter of Tarzino couldn’t get the job done as a $1.65 favourite in Class 3 company, so we can’t see how she could be competitive in a Group 1 against the boys.

Kipling’s Journey will probably run a bit of a race if he were to get a start. The Peter & Will Hulbert-trained gelding was better than the racebook suggests when 13th of 14 in the Queensland Guineas (1600m) two starts ago, and he nearly pinched it last week over 2150m in a 3YO Handicap. The 2400m is what he is looking for now.