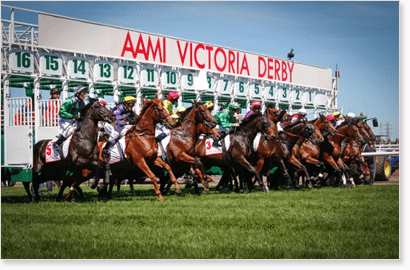 THE Victoria (VRC) Derby is the flagship race for three-year-olds during the Melbourne Spring Carnival.

Betting markets for the Derby are released in the months leading up to the 2500-metre feature, but some bookmakers will set a market earlier in the year.

Worth $1.5 million, the VRC Derby is a target race for the staying three-year-olds and Derby Day has become one of the biggest punting days of the year in Australia.

The VRC Derby is raced over 2500 metres, the longest race for three-year-olds in Australia.

It carries a purse of $1.5 million with a $10,000 trophy and it kicks off the Melbourne Spring carnival at Flemington.

One of the oldest races in Australia, the Derby was first run in 1855 where it was won by Rose Of May.

The first three editions were won by fillies, but the last filly to win was in 1923. It has been won by horses having their first start on three occasions, but in today’s climate and race conditions, it is virtually impossible to enter the race without having had a run.

While a filly hasn’t won since 1923, the ladies have enjoyed a lot of success with jockey Clare Lindop becoming the first female jockey to win in 2005 aboard Benicio. Gai Waterhouse became the first female trainer to win the VRC Derby when Nothin’ Leica Dane won in 1995.

One of the most capped combinations in Derby history was Bobby Lewis, who won eight occasions in the early 20th century, and trainer James Scobie, who was associated with most of Lewis’s victories.

The VRC Derby has been the turning point for many of Australia’s future champions.

2016: Prized Icon gave rising star trainer James Cummings one of his career highlights when winning at double-figure odds. The More Than Ready colt showed its superior staying talent by running away with a 2.5-length victory from the front. It beat home race-favourite Sacred Elixir which had been heavily backed in the betting and the John O’Shea-trained Inference which further franked the Sydney three-year-old form. Read the full report here.

2015: Tarzino had been touted as a top Derby prospect from an early age and it didn’t disappoint. The Mick Price-trained colt scored one of the most impressive Derby victories in recent history with an effortless two-length win. On a rain-affected track at Flemington, jockey Craig Newitt landed the son of Tavistock into a beautiful position before making its run around the home turn. Since the win, the form out of the race hasn’t amounted to much, but take nothing away from the classy win.

2014: Damien Oliver returned to Flemington after sitting out with a suspension and he made an immediate impact. He rode the Chris Waller-trained Preferment to victory in one of the closest finishes in Derby history. The well-bred son of Zabeel edged out Bondeiger by a head to score the $1.5 million purse. Preferment would continue to race at a high level in Australia and even try its hand in the Hong Kong Vase.

2013: Trainer Robbie Laing confirmed himself as one of the best staying trainers in Australia when he scored with Polanski in 2013. The three-year-old by Rakti was popular with punters at $5.20 and it did the job with ease – winning by three lengths over Complacent and Thunder Fantasy. The disappointment in the race was from favourite Savvy Nature which finished well down the track and would later be sold to Hong Kong interests.

2012: Fiveandahalfstar caused an upset in 2012 when winning at odds of $19.30. The Anthony Cummings-trained gelding gave Damien Oliver the first of two successive wins in the Derby when it was able to hold out Super Cool and Rawnaq. The quality of the field was questionable, but race-favourite It’s A Dundeel was the measuring pole – with the Baker runner finishing seventh. Rawnaq paid $19.30 for the place which resulted in an $81,704 first four payout.

Betting on the VRC Derby

To give an idea of what the VRC Derby field will look like in future years, we’ve listed the 2014 VRC Derby market as a guide.

The race always attracts a big field and it gives punters of every kind a chance to win. Those that like to back favourites will get their chance, but those who like outsiders will have plenty of runners to choose from.

Preferment was on the third line of betting, so favourite punters were happy. Bondeiger was the fifth elect for punters and provided good each-way value.

Nozomi added some spice to multiples bettors after paying $51 to win, providing good place money and adding value to trifectas and first fours.