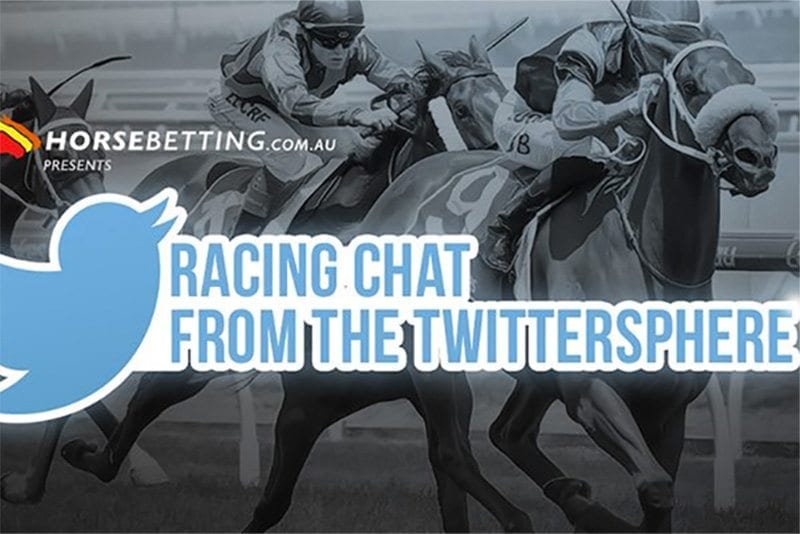 THE huge group races are around the corner and all the big names are now out in force across the entire country.

It kicked off on Friday night as Moonee Valley hosted the Moir Stakes, then it shifted to Sydney on Saturday as Randwick was the setting for the Epsom Handicap before concluding on Sunday at Caulfield for the Underwood Stakes.

The quality of racing did not let us down either.

Friday night saw the “Black Caviar special” She Will Reign doing exactly that in the Moir, while two days later the Caulfield Cup favourite Bonneval showcased its immense talents in the Underwood.

Social media was set alight as the action took place, so let’s take a look at what Twitter had to say on the long weekend of group one racing.

We are not sure you will see a more heart-stopping conclusion to a group one race this spring.

A lot of people have laughed at me for believeing She will reign might be a bit special Black Caviar and Winx special. Tonight she will show the world #MoirStakes #WinGoingAway

Making its Victorian racing debut, first-up against a white-hot Russian Revolution, She Will Reign had every excuse to under-perform in the Group One Moir Stakes on Friday night.

But win it did, storming home late to topple the desperately unlucky Viddora in dramatic circumstances.

Trialing heading into the final stages of the race, running in the unfamiliar counter-clockwise position, the filly powered strongly to the line to win one of the best Moir Stakes races of all-time.

Nice. Bet ya heart was in the mouth 400m out with She Will Reign! Thought she was gone…

The focus now shifts to The Everest, where She Will Reign is currently the $4.60 favourite at Ladbrokes.com.au.

Confidence levels are high for punters ahead of the inaugural running of the race.

I don’t even know what the right superlative to use is…. She Will Reign just put one hoof on the Everest trophy and said BRING IT ON!

She Will win the Everest (maybe). But geez that was some win She Will Reign #TheValley

On the back of that win, who are we to argue?

It was a popular win for punters and racing lovers alike, but Happy Clapper’s win in the Epsom Handicap was uninspiring due to the underwhelming field for the typically-well-contested group one.

Moir Stakes tonight but it's too tough this year and the Epsom looks a bit weak this year.

A race that has had Hauraki, Winx and Boban win in recent times, Happy Clapper’s win felt lacklustre given the quality simply was not there.

The manner in which the horse won was special however, which did give the race a special feel to it nonetheless.

Beating the perennial punching bag that is Tom Melbourne, the numbers coming out of the race were surprising.

Happy Clapper was already flying (had clear best speedfigures) going into Epsom but comes out with a new peak number. As does Tom Melbourne.

The win was a popular one for the trainer too, who has persevered with the horse after failing at the top level multiple times.

We are not reading too much into the form of this race however, but Sunday’s feature is a different story.

We have a new Caulfield Cup favourite ladies and gentlemen.

After coming across the Tasman as a mare that had scope for improvement, Bonneval has exceeded expectations since debuting in Australia.

Yes…a very fit and winning mare!!Bonneval is living up to her full potential!!🏇👍

And now after taking out the Underwood Stakes at Caulfield on Sunday, the horse is the $5.50 outright favourite at Ladbrokes for the Cup on October 21.

The value has dried up on Bonneval, unless you are as eagle-eyed as this punter.

The win was a peculiar one on the day for Bonneval, which settled at the back of the field where the majority of runners throughout the day struggled to win from.

Superstar jockey Hugh Bowman remained confident on the Kiwi however, and presented it at the optimal time.

Yep. Tempo a surprise. Played to Bonneval. At first I thought mad to settle there. Looking at the figs – what could he do? Fair enough.

It was a win that exuded class, and extended the Bonneval winning run to six-straight.

The mare has drawn comparisons from one brave enthusiast compared the horse to another famous female.

Could Bonneval be the next Winx? 🤔🤔🤔

The next course for Bonneval is the Caulfield Stakes, given it will not receive a penalty for running well in the race.

One armchair historian pointed out the Baker training camp will be able to replicate their own stellar feats if they can pull off the Caulfield double.

Here’s hoping the team can pull it off, because any Aussie knows, when a Kiwi wins, the Aussies win. We’ll claim them as our own anyway.