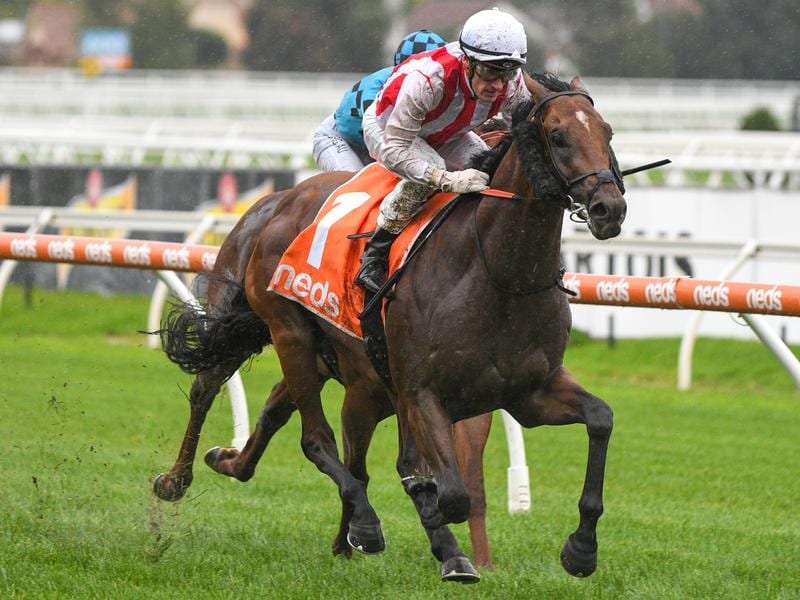 Caulfield Guineas winner Super Seth has made a successful return to claim the Manfred Stakes.

Caulfield Guineas winner Super Seth has returned to the scene of his spring heroics and kicked off his latest preparation in style in the Group Three Manfred Stakes.

Having his first start since chasing down Alligator Blood to win a memorable Group One Caulfield Guineas in October, the Anthony Freedman-trained colt showed he was on track for another big campaign after storming home again to win Saturday’s Manfred (1200m).

Last year’s Blue Diamond Stakes placegetter Free Of Debt led the small field in soft conditions and gave a good kick in his first start since last autumn but Super Seth warmed to his task and reeled him in with 50m to go.

Super Seth ($5) defeated the Adelaide-trained Free Of Debt ($17) by 1-1/4 lengths with another South Australian colt Dalasan ($2.05) doing his best work late to finish another head away third.

“It was an impressive performance,” Freedman said.

“We obviously didn’t know whether he would handle the ground but he seemed to get through it all right.

“He seems to have come back at least as good.”

Jockey Mark Zahra believes Super Seth has improved again and said the colt had a real will to win.

“He likes to win and knows where that winning post is,” Zahra said.

“With colts when they come back you never know what to expect but he’s come back bigger and better I reckon.”

The Group One Australian Guineas (1600m) at Flemington on February 29 is Super Seth’s first main target this campaign and he has firmed from $9 to $6 behind $4 equal favourites Alligator Blood and New Zealand star Catalyst.

That trio are scheduled to clash before the Guineas in the Group Three CS Hayes Stakes (1400m) on February 15.

With Saturday’s Manfred run in wet conditions at Caulfield, Freedman revealed he considered whether to scratch the valuable colt before deciding to run to keep his program on track.

“I actually spoke to the stewards about it but in the end I thought we’re not going to learn anything today if we don’t run,” Freedman said.

“At least we’ve learned something and he’s had a good hit-out.”

Free Of Debt’s jockey Jye McNeil said the colt gave a good kick and believes there is improvement to come from him while Dalasan’s jockey Craig Williams felt the colt was outsprinted by Super Seth in the conditions but loved the way he closed late.