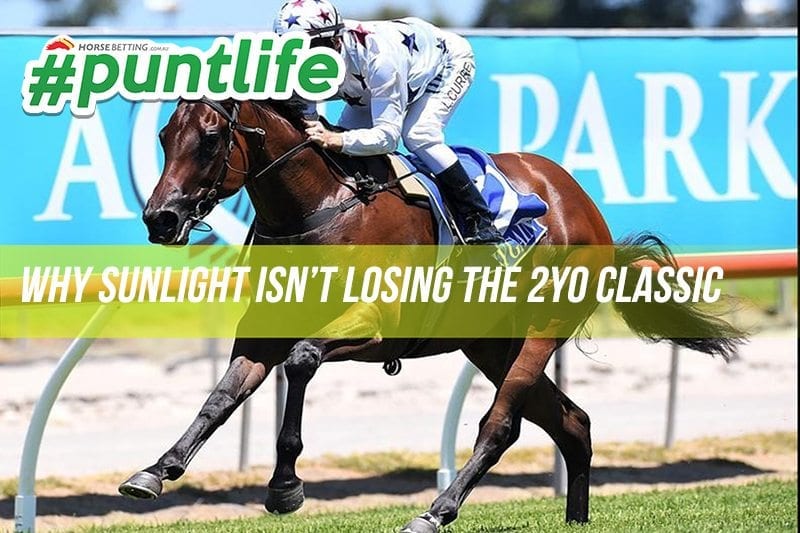 LET’S get one thing straight, Sunlight is winning the Magic Millions 2YO Classic, whether you like it or not.

Following two dominant displays on the Gold Coast, the two-year-old filly is cherry ripe to take out the coveted race, which is why we’re surprised that bookies let her drift in the market following Tuesday’s barrier draw.

After tightening into the $3.80 mark following its brilliant win on Saturday, the allotment of barrier 15 has caused Sportsbet to wind the in-form filly out to the $4.40 mark to take out the 2YO Classic this Saturday.

We’re talking about the same horse that hasn’t had a rival come within four and a half lengths of it in its two starts on the Gold Coast, right?

On both of those occasions Sunlight has been hunted forward and found the front. It looms as the ideal preparation for the Magic Millions 2YO Classic, given the wide barrier will dictate the horse’s tactics.

We’re anticipating that Sunlight gets bustled along to be in the leading division on Saturday, and from there give them something they’ll attempt to catch, but ultimately fall short.

Below is Sunlight’s first start at the Gold Coast over the 900m and unlike its most recent run, the filly was challenged for the early lead and wasn’t left alone as the lamp lighter, but still managed to boot clear in the concluding stages.

The win on January 6 was another strong performance and a great lead-in to Saturday’s feature given the horse won by 4.5 lengths with an additional 200m to cover.

This is the horse that is experiencing a drift in betting?

“The Magic Millions will be a different class of field” we hear you say, and while you’d be correct, we’re dealing with an absolute powerhouse of an animal which is known for speedy beginnings and strong, sustained sectionals.

The added benefit will also come in the form of having gate-speed specialist Ef Troop drawing to the outside.

Tony McEvoy said after the barrier draw he believes the rival will give Sunlight the perfect tow into the race.

“It is an okay draw, I think, I just didn’t want to draw completely out or completely in,” McEvoy told Sky Thoroughbred Central.

“So the way the track is racing at the Gold Coast, I think that barrier with her speed allows her to take her time to get forward and she’ll be right on the back of whatever the speed is.

“I think the other helpful thing for me is with Ef Troop drawing 18, he has got to do probably what last year’s winner did and we will work off the back of him.”

This means Ef Troop will be forced to take the Houtzen route while Sunlight gets the trial, and if all goes according to plan streak away in the latter stages to take out the race.

If push comes to shove though, Sunlight can lead and win.

If you cast your mind back to this time last year you’ll recall a star runner by the name of Houtzen overcame the widest draw of all to record a powerful MM win.

Burning across the front of the field, Houtzen was never headed after finding the front.

Wide barriers are not an issue in a race like the Magic Millions 2YO Classic like they are at other venues, and for horses that have genuine barrier quickness, the issue becomes even less relevant.

We’re not worried about the wider draw and neither should you.

Sunlight is winning the Magic Millions 2YO Classic, so rather than mounting a case for why it doesn’t win, just enjoy the inflated odds (while they last) and count your winnings as it boots clear at the 200m.