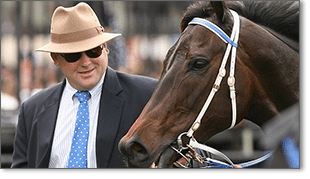 PETER Moody has had some success on the first day of his cobalt trial, winning the right to access Racing Victoria internal communications.

Moody’s counsel Matthew Stirling alleged that stewards broke the rules of racing when they intervened in the testing process of urine samples taken from Lidari after it ran second in the Group 1 Turnbull Stakes last year.

Stirling submitted evidence to the Racing Appeals and Disciplinary Board that both tests on Lidari were done from ‘B’ samples, which would mean there is no analysis for the ‘A’ sample, which he argued would be needed under the rules of racing.

Stirling also argued the Racing Analytical Services Laboratory was advised that it did not have the facilities to test for cobalt at that time and that there was insufficient urine to conduct a full analysis of the A sample.

Racing Victoria was advised not to proceed with further testing, but Racing Victoria stewards intervened in the process, ordering the B sample be split for testing at the ChemCentre and the Hong Kong Jockey Club laboratory.

“Racing Victoria should keep its nose out of the laboratory,” Stirling said.

“The role of Racing Victoria is to hand samples to the laboratory and then stay out of it as a protection to trainers.”

Jeff Gleeson, representing the stewards, defended the release of the documents, arguing that stewards had explicit power in the rules of racing to take and test samples in any manner required.

The RAD board ruled in favour of Moody, however, chairman judge Bowman told Stirling he must be precise about what documents are required and why.

The case will be adjourned to next week and resumed in late January because two key witnesses, the ChemCentre and Hong Kong Jockey Club, will not be available before then.

In related news, Peter Moody blamed a hoof powder for Lidari’s elevated cobalt levels. Stirling said he was determined to convince the board that there was a “real and creditable possibility” that the hoof powder caused the positive result.

Promising colt Bondeiger was sold for a seven-figure sum last year despite stewards knowing the horse tested positive for cobalt when being trained by Danny O’Brien.

Bondeiger had finished second in the Group 1 behind Preferment last year and was looking towards a successful Autumn campaign before stewards found a positive sample 20 days after its Derby run.

It was also revealed that another O’Brien-trained runner, De Little Engine, was allowed to race three times after returning a positive test.

Rules state that “on the detection by an official racing laboratory of a prohibited substance in a sample taken from a horse” the lab must notify stewards who “shall thereupon notify the trainer of the horse”.

De Little Engine’s owner, Jeff Dimery, said he would consider legal action if Racing Victoria could not explain why his horse was allowed to race.

Dimery added that if stewards had followed due process, “we wouldn’t be in this mess”.

De Little Engine tested positive after winning at Ballarat on November 22 last year, but was allowed to race on December 6 and December 20 when it won on both counts, and again on January 1 where it finished third.

Racing Victoria was aware of six positive drug tests to cobalt when its chief steward Terry Bailey declared the 2014 spring carnival drug free and the “best” in a decade.

We will provide any updates to both stories as they come to hand.