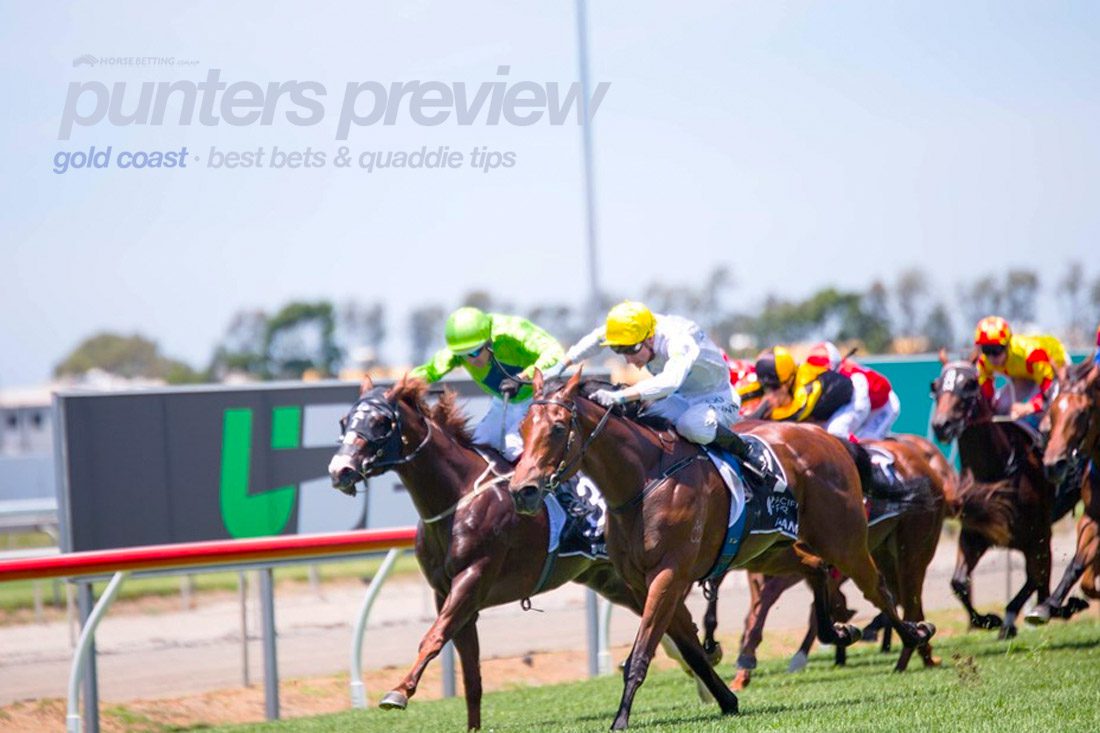 Saturday metropolitan racing in Queensland heads to the Gold Coast for the rich QTIS Jewel race day. Over $1.7 million in prizemoney is on offer across the nine races, including the $500,000 QTIS Jewel 2YO and $500,000 QTIS Jewel 3YO. HorseBetting’s Queensland racing expert presents you with his best bets in both feature races, as well as his best bets, value bet and quaddie numbers for the remainder of the program. Ideal conditions for racing are predicted with the rail in the true position and the track rated a Soft 5, while fine weather over the next few days is likely to see the track upgraded to a Good 4. Racing gets underway at 11:57am AEST, with the running of a Fillies and Mares Benchmark 72 over 1200m.

Steven O’Dea and Matthew Hoysted have built one of the most consistent training stables in the South-East over the past 18 months and they come into the feature event with the raging favourite, She’sgottheboom. The two-year-old daughter of Spirit Of Boom is unbeaten in her two career starts, winning at Doomben on debut by 3.3 lengths, before leading all of the way at Toowoomba in the QTIS Jewel 2YO Qualifier at Toowoomba over 1100m. Boris Thornton has had everything to do with this filly, so it is no surprise to see the in-form hoop in the saddle once again. From barrier seven, Thornton will take the race favourite to the front as she has done in both of her starts to date, before giving a brilliant kick on the turn. This filly has been so good in winning her two starts, we would be shocked to see it come to an end here.

The Rob Heathcote stable has been flying of late, with 10 winners from the past 50 starters. One of those 10 winners was Prince Of Boom in the QTIS Jewel 3YO Qualifier at Toowoomba on March 5 in what was the three-year-old’s first run back since contesting the a 3YO Quality at Doomben in September when fourth behind dual-Group 1 place-getter, Startantes. The gelding found the front early at Toowoomba from barrier seven and he gave a good kick on the turn to race clear and win by 2.5 lengths in the 1100m event. Now second-up and out to 1200m, the three-times winner can have every chance of making it back-to-back wins and take his prizemoney beyond $500,000. James Orman stays in the saddle which is a big plus considering he has ridden 15 winners from his past 50 rides. From barrier six, Prince Of Boom will be in the right spot in the run to be able to win again. He could be far too classy for these.

QTIS Jewel 3YO Best BetRace 8 – Prince Of Boom $2.90 with Sportsbet

Matt Kropp and Alex Patis combine with talented galloper Festival Prince in a 1200m Benchmark 72 for Colts, Geldings & Entires. The four-year-old gelding has won five of his six career starts and is looking to make it six in a row when he returns to the races on Saturday. The son of Fruehling won his maiden at a Non-Tab meeting at Talwood on August 14 by 5.5 lengths, before winning at Dalby, Warwick, Ipswich and Toowoomba. In his win at Warwick, Festival Prince gave Go Wandji windburn over 1100m, and that horse has won his past three races at Doomben, Eagle Farm and Toowoomba, which is a fair indication of just how good this galloper could be. Kropp gave his promising four-year-old a trial at Toowoomba on March 8 where he cruised to a one-length victory over 925m. If he has come back well, which he looks to have, he could give this field a touch up. The 3kg claim from Patis is a huge advantage as well, meaning the horse only has to carry 54.5kg.

There is speed to burn in the fifth race of the day, as a field of 10 Open-class sprinters do battle over 900m. Scone trainer Scott Singleton has had success in these types of races before with 900m specialist Remlaps Gem, who comes into the race unbeaten over this distance in five attempts. The five-year-old son of Rubick has won four of his past five starts, all of which were over 900m, while one was at this track and distance on January 8 where he defeated Racecourse Road by 1.25 lengths. The gelding was dominant on March 4 over this distance at Newcastle, leading all of the way to win by 2.4 lengths, so he comes into this event in serious form. From barrier three, Kyle Wilson-Taylor will have the handlebars down early, giving this speedster every chance of winning again. He’d need a lot to go wrong if he is to taste his first defeat over 900m.

Next BestRace 5 – Remlaps Gem $2.80 with Sportsbet

Tahitian Dancer is having her first start for the Tony Gollan stable, so if the master trainer can do to her what he’s done to horses like Jonker, Krone and Baller, she will take some beating first-up. The six-year-old mare hasn’t won since December 2019, but that did come in a Listed race at Eagle Farm, so we know what ability she has shown. In her next start after that, the daughter of Dawn Approach went around in the Magic Millions Fillies & Mares at this track over 1400m, finishing six lengths behind Invincibella. The mare’s form last preparation was not very good, we’ll admit, but a change of scenery could do this $360,000 earner the world of good. She showed us enough in her sole lead up trial behind Weona Smartone and Jonker that she has come back well, so we are happy to be with her first-up on an improving track. She should get the favours in the run from barrier six, giving Ryan Maloney few excuses come the business end of the race. We are happy to be on at $23 the win and $6.50 the place, which you should seek at Aussie race bet sites.