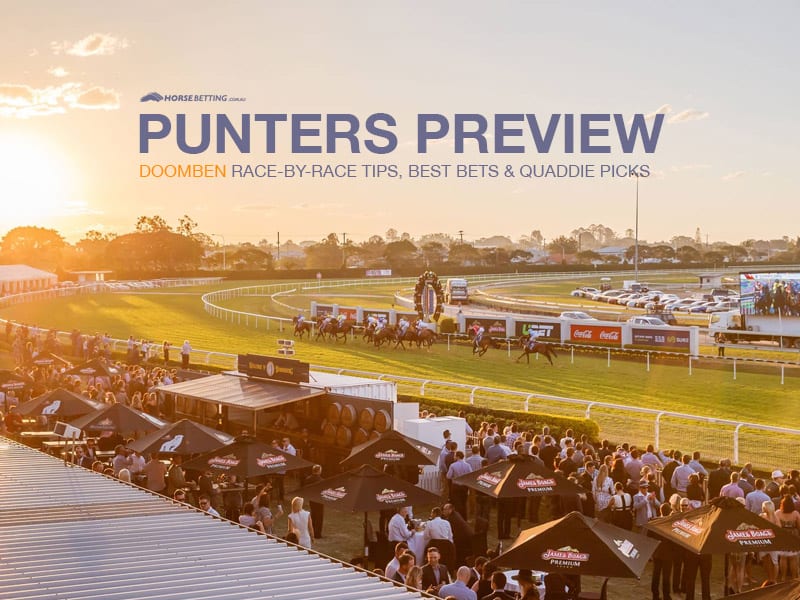 The first Group 1 race day for the 2021 Brisbane Winter Carnival features a cracking nine-race lineup at Doomben. The Group 1 Doomben 10,000 takes top billing on a quality card littered with Group and Listed races. The track is rated a Heavy 8 after some rain during the week, but drying conditions should lead to an upgrade by Saturday. The rail will be in the true position, so we expect the track to play fairer than it did last time at Doomben when the 3m rail favoured the inside runners. HorseBetting.com.au brings you a full analysis of every race at Doomben, including best bets and quaddie numbers.

We kick off the morning with a very quality Class 6 Handicap that sees the likes of The Move, Gee Tee Tee and Varda go around over 1110m. While there is plenty of quality at the top of the market, one mare who can sneak in under the radar is John Johnston’s Moonshine Lady. The five-year-old mare by The Factor hugged the rails to finish third on the heels of Fender and Garibaldi on a Soft 6 at Eagle Farm on May 1 in a very similar race. She does drop back to 1110m which may not suit her entirely, but the wet conditions are going to be just what she needs. A repeat of the effort and she is right in the finish here.

A field of seven will contest this Listed Handicap over the mile and while it does lack depth, there looks a clear standout in Danny O’Brien’s mare, Fabric. The five-year-old mare was a Group 2 winner at Morphettville last start and now finds herself in an average race at Doomben, so we expect her to be too good. Drawn wide in barrier six, Glen Boss will have her bang on midfield and she should come into it in the best part of the track to strike in the straight. We are surprised to see her equal favourite with Reloaded who hasn’t won for 106 weeks.

A pretty solid field of three-year-olds has been assembled in this 3YO Plate over 1350m. Richard & Michael Freedman saddle up their grey gelding, Love Tap who is having his first start since the Group 1 Spring Champion Stakes over the Spring Carnival. The son of Tapit was undefeated in four starts prior including the Group 3 Gloaming Stakes. He will go forward from barrier seven under Nash Rawiller and should be able to maintain a solid tempo with plenty of freshness in his legs. Incredulous Dream was a good winner at Morphettville last start and looks to be the main danger, while Bundyandcoke will appreciate the wet ground on the back of a freshen up.

In what is a decent Group 3 JRA Chairman’s Trophy between 11 stayers over the 2000m, we are happy to be with the race favourite, Hang Man. The Mike Moroney-trained seven-year-old has been racing in career best form with three wins and two thirds in his past five starts, including wins in both the Yarra Valley Cup and Easter Cup at Caulfield. His last start saw him finish on the heels of Zaaki who since gave his rivals a galloping lesson in the Group 2 Hollindale Stakes. That’s the form we have to be with. Drawn well in barrier four, he will be getting a lovely run in transit under Glen Boss and winning this.

In what is the first leg of Brisbane’s 2YO Triple Crown, a good field of 13 has been assembled to contest the Spirit Of Boom Classic (aka Champagne Classic). Rob Heathcote unveiled a smart one at the Sunshine Coast on Sunday and has elected to back him up six days later in this. The time he ran was the quickest out of all four 1000m races on the day and he did that on debut after being six-deep on the turn to win by five lengths. Drawn the inside under Ben Thompson, he should get plenty of cover and be right within striking distance at the end of the 1200m.

The three-year-old colts and geldings have their first staying test en route towards the Queensland Derby, and master Sydney trainer Chris Waller has a strong hand in the Rough Habit Plate. While he has the race favourite, we are siding with one of his other runners in the form of Kukeracha. The son of Night of Thunder was brilliant when third in the Group 2 Queensland Guineas last time out at Eagle Farm over the mile and looks perfectly suited up to 2000m. Drawn barrier two, he will be able to let the speed go and follow them through along the inside to be finishing over the top of them. Senor Toba is the danger after a good win at Randwick last start where he beat High Supremacy.

The first Group 1 of the Brisbane Winter Carnival is here in the form of the Doomben 10,000 over 1200m. A quality field of 11 sprinters has been assembled, with a split of five Queensland-trained horses against six visitors. Tony Gollan has a good hand in the race with two quality geldings in Vega One and Graff. We are leaning towards the former after a brilliant second-up run at Eagle Farm last start. His wet track form is very good, and his track record at Doomben reads well. Graff was a Group 3 winner first-up on a Soft 6 at Caulfield last preparation and after a nice trial he will be ready to fire fresh. Eduardo is a deserving favourite and will scorch the turf in front, it is just a question of whether or not he can see out a strong 1200m on a wet track. For a full breakdown of all 11 runners, read our Doomben 10,000 runner-by-runner preview.

Sixteen Fillies & Mares will compete in the $150,000 Bright Shadow in the penultimate race. While we are big fans of Athiri, we are surprised to see her at the top of the market after a disappointing run at Hawkesbury last time out. We thought there was again a bit of value to be had with two runners here: Socialising and Maozi. The Tony Gollan-trained Socialising has won three of her four starts here at Doomben and goes great when fresh off a spell which she gets here. With plenty of speed in the race, she is going to have to get back in the run under Jim Byrne from barrier 19 which is a concern, but she will be charging home late. Maozi is the other mare who has a good record at Doomben, she goes well second-up and was super when fresh. Drawn well in barrier four, she can be right in this.

We finish the day with a Benchmark 85 over the famous 1350m start at Doomben which gives runners a long back straight to sort their positions. A capacity field has been assembled including the Provincial Championship Final winner in Cristal Breeze for Kris Lees and James McDonald. The five-year-old gelding would have been a good thing beaten in the Provincial Championship if he didn’t win, so we are confident that he can go on with the job in what is an easier race. Drawn out in barrier 11, he will get back under J-Mac and be able to finish hard down the centre of the track. Axe is a clear danger after finishing second to the very talented Skins last time out.