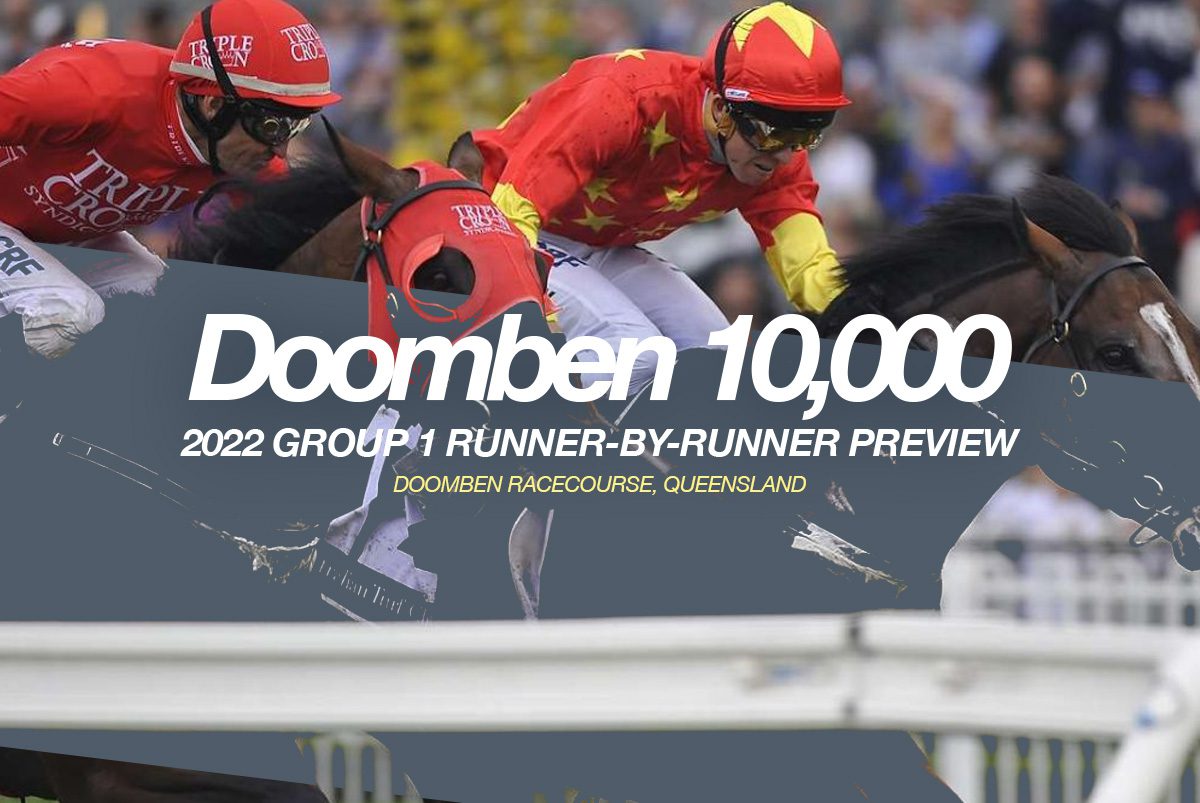 The Doomben 10,000 is the first Group 1 of the 2022 Brisbane Winter Carnival, and it will be run and won at Eagle Farm Racecourse this Saturday, May 14. The $1 million sprint will be contested over 1200m, with a field of 15 assembled for the famous race.

Mazu has been rock-solid in betting for some time now, with online bookmakers opening the in-form three-year-old as the $2.70 favourite in the final field. Kementari ($9) and last-start Victory Stakes winner Count De Rupee ($9.50) are the only two other runners in single figures with Ladbrokes, while Paulele, Entriviere and Isotope are all $10 apiece.

There is no shortage of speed, with Zoustyle ($21), Rothfire ($14) and Generation ($11) all go-forward horses, while Mazu, Paulele and Count De Rupee won’t want to be too far away in the run either. The likes of Kementari, Baller ($67) and Isotope will settle down midfield, while Minhaaj ($34) and Signore Fox ($51) are likely to get back in the run, along with Entriviere.

Continue reading for HorseBetting’s runner-by-runner preview and $100 betting strategy for the Doomben 10,000.

Special K was a last-minute acceptor in Saturday’s Doomben 10,000, with the original plan being that he would start in next Saturday’s Goodwood Handicap in Adelaide. Kementari is already a Group 1 winner, so he is in well at the weights under weight-for-age conditions, while he comes in with confidence after a good win in the Hall Mark Stakes on April 16. He will be given a good steer from barrier three under Nash Rawiller, and the wet track should only aid his chances. He’s a different horse now.

This time last year, Vega One was too good for his rivals in the Group 1 Kingsford Smith Cup (1300m), before running second in the Stradbroke Handicap a fortnight later. He has only had one run since then when beating just one runner home in the Victory Stakes over 1200m. He was doing his best work past the post, so he might be wanting a bit further now.

Gee this guy impressed us last time out in the Victory Stakes when diving through along the rails to win in the final stride. The Kembla Grange-based four-year-old has some serious form in Sydney, and the move to Eagle Farm is extremely beneficial for this galloper. Drawn beautifully in barrier five under Brock Ryan, Count De Rupee is going to get the run of the race and will once again have the last crack at them. He is the clear danger to Mazu and one of the best winning chances in the race.

On his day, you Zoustyle could run his rivals into the ground, but it hasn’t been his day for a little while. The Gollan-trained galloper will be the leader in the race along with Rothfire, but we think his time in front will be short lived.

What to do with Rothfire? The horse is an out-and-out gun, so we are happy to forgive him off his first-up run when fifth in the Victory. He just over-did it from out in front when first-up off a long break, so he was entitled to knock up. Heathcote was never going to accept in this race if it was run at Doomben, but the fact that he is happy to start in the race at Eagle Farm suggests that he pulled up well and is ready to go. With Queensland’s in-form jockey in the saddle, you certainly can’t rule him out.

The fairytale horse of the autumn… Shelby Sixtysix won his Group 1 in The Galaxy, but we fear he may never win another race. He should be in the paddock, not this Group 1 race.

Signore Fox has a nice record in Queensland, finishing third in last year’s Stradbroke. While he hasn’t found form good enough to match that effort this time in, he finds himself in a high-pressure race at a track he regularly runs well in. He’s probably the one at big odds that could surprise on Saturday.

It was interesting to hear Tony Gollan’s thoughts during the week in regards to Baller, given he was disappointing in the Victory when rock-solid in the market. The master trainer was also unhappy with the run a fortnight ago, but he said that his work during the week was exactly what he wanted to see, so we could see a much improved horse on Saturday. Whether or not he is good enough to win a Group 1 of this calibre, we might see a different Baller here.

You can’t be any more in-form than what Mazu is, winning five-straight races in Sydney. Drawn ideally in barrier eight, Sam Clipperton is going to get the race favourite into a beautiful position in the first four or five, which will give the three-year-old gelding a brilliant winning chance as he looks to bring up his first Group 1. The Snowden camp bypassed The Galaxy in preference for the Arrowfield Sprint which he won comfortably over 1200m, so he should take plenty of beating in this if he repeats what he has done all season long.

Paulele is an interesting runner on Saturday, and while we don’t necessarily think that he can win, a first-four finish would not surprise us one bit. The James Cummings-trained colt ran third in the TJ Smith Stakes two starts ago behind Nature Strip and last year’s Doomben 10,000 winner Eduardo, and he then went on and ran third behind Mazu in the Arrowfield, so he arguably brings the best sprinting form to the race. James McDonald is only an advantage.

Another quality three-year-old in the Doomben 10,000 is the Maher & Eustace-trained Generation. The Snitzel colt has a terrific record, with the only time that he has missed a place in his eight starts coming last time out in the William Reid Stakes at The Valley when fourth behind September Run. It was a pretty weak edition of that Group 1, so we aren’t too thrilled with that form, but he did look good when winning a trial at Rosehill in late April. The Jamie Kah effect?

For a horse that doesn’t like wet tracks, we were surprised to see the Edmonds team accept with Alpine Edge. He is a classy three-year-old, no doubt, and his form at Eagle Farm is solid, but we are happy to put a pen through him in this company on a rain-affected surface.

Entriviere can definitely do the Kiwis proud on Saturday and do what The Bostonian did three years ago by winning this race. She is a quality mare and she got her first Group 1 at the beginning of the year, so she has to be considered. The move from Doomben to Eagle Farm will be to the Mark Walker-trained mare’s liking, while the hot tempo will only aid her chances given she is likely to get back to near last from the outside alley. Watch for her late coming down the outside rail.

If there is a Queensland horse who deserves a Group 1 victory, it is Isotope. She’s one of the state’s best horses and we are positive that she will be a Group 1 winner before she retires. Whether that is this Saturday remains to be seen given her wet form doesn’t jump off the page. Ryan Maloney knows the mare well, she’s won over $1 million in prizemoney and she should get a decent run, despite barrier 13. She will be doing her best work late.

Minhaaj is another mare that is deserved of a win at the highest level. At the start of the autumn, we thought she was almost a good thing to win a Group 1 but she was plain in her two starts. Back on to a drier track in Brisbane on Saturday will help, while barrier two is going to ensure she gets every chance under Tommy Berry to have a crack at them. Not sure she’s going good enough, but her best form certainly is!