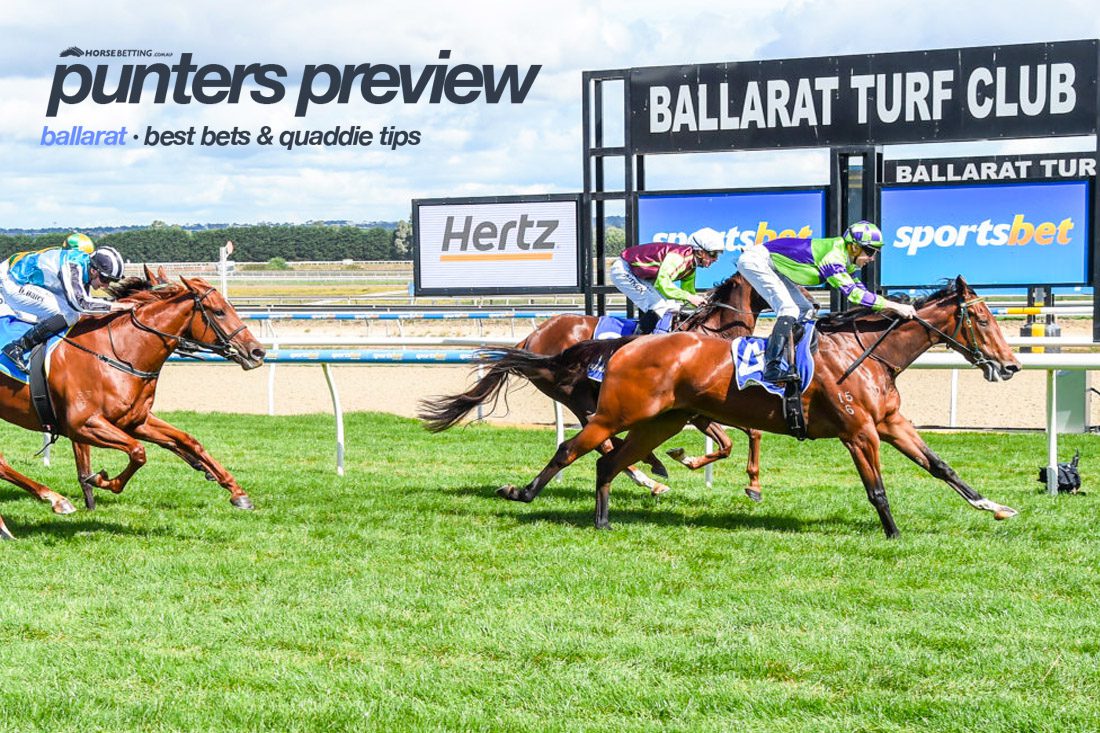 Racing heads to the Ballarat Turf Club once again for an eight-race card on a Tuesday afternoon and Horsebetting’s Victorian tipster has gone through the card in a bid to help find you a couple of winners. The track is a Good 4, with the rail returning to the true position having been out 8m for last week’s meeting. With that in mind, it may prove to be advantageous to be on the rail/fresh ground early on, but we expect the track to play fairly as it usually does.

We do not need to look any further than the first horse in the race book for our best bet of the day, as the Anthony & Sam Freedman-trained Cannonball steps out in the opener. Having raced in much stronger company during his initial campaign as a juvenile, the two-year-old Capitalist colt finished a touch over a length from Sejardan, who is set to go around as one of the key chances in Saturday’s Golden Slipper. Mark Zahra should have no hesitation in getting the chestnut to the rail and looking to dominate proceedings throughout the 1000m scamper. With all of his rivals on debut, we expect the race day experience and proven form lines to get Cannonball into the winner’s stall for the first time at start three. The $2.15 on offer from Neds is more than a good enough price.

Next Best at Ballarat – Dodgy One

Having finished third in a Tasmanian Derby on February 11, the Ciaron Maher & David Eustace-trained Dodgy One is set to appreciate dropping out of Listed level and go around in a mid-week BM64. The three-year-old Reliable Man gelding gained the run of the race in the Derby, but couldn’t match the turn of foot produced by eventual winner The Nephew. From barrier 14, John Allen who sticks on board will need a touch of luck in not getting trapped three wide the trip and if he is lucky in doing so, he looks extremely hard to hold out. Having not finished outside of the top three in his first four starts, he is clearly a stayer on the rise and despite the drop back to 2000m from 2200m, Dodgy One looks one of the better bets at Ballarat.

The Ben & JD Hayes-trained Hinto Blue will look to build on his midfield finish at the Ballarat 1200m on February 20 when he returns to the track and distance on Tuesday. He was doing his best work late on that day and despite staying at the 1200m, we expect he will come on with natural improvement he will be hard to beat in the penultimate race of the day. With both of his career wins coming at the 1200m, it is clearly his preferred trip and considering he has two runner-up efforts from as many second-up runs, we are expecting a forward showing in this. We expect to see Luke Nolen to have Hinto Blue settled in the second half of the field and armed with a nice turn of foot, the Tavistock gelding is the one we want to be with in the penultimate race of the day.

Hi, I have just starting using Horse Bettingcom.au and have found it an excellent web site.
I noticed for today that the value bet in the tips at Ballarat (Hinto Blue) is a scratching, could you please let me know if a replacement value tip is available for this meeting.
Kind regards
Andrew