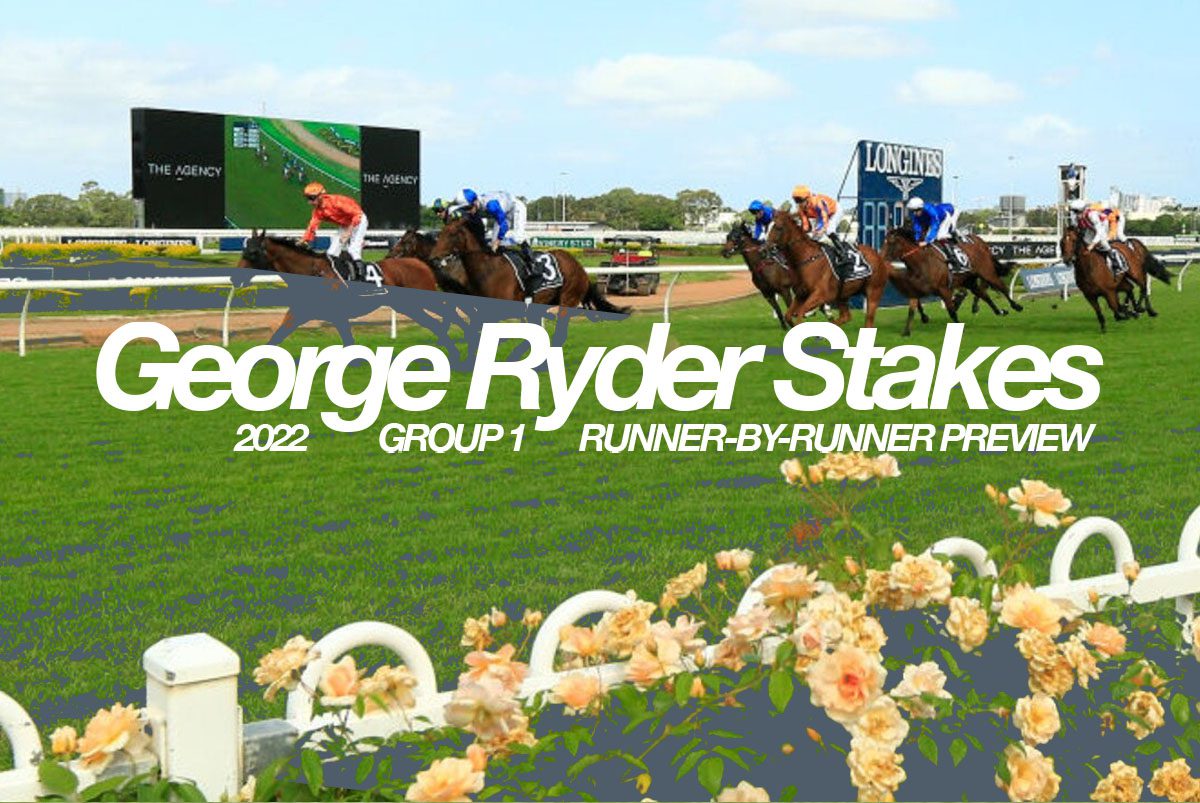 A terrific field of 11 gallopers has been assembled for the 2022 George Ryder Stakes. With $1 million in prizemoney up for grabs, we expect to see a thrilling finish to the 1500m Group 1 event.

With the scratching of Converge on Wednesday afternoon, Forbidden Love firmed into $3.30 outright favouritism for the race, just ahead of Mo’unga ($4), with Colette ($6) and Private Eye ($7.50) the only other runners in single figures. The race favourite looks to be the likely leader from barrier two, along with Riodini and Kolding.

The top weight for the George Ryder is Kolding, who is looking to give Chris Waller his first win in the race since mighty mare Winx retired. The son of Ocean Park has not won for a long time and he just isn’t racing well enough to entertain him. Not today.

Mo’unga won the Rosehill Guineas on this day last year, and given the way he resumed in the Futurity Stakes at Caulfield on February 26, there isn’t much to say that he can’t win another Group 1 on Golden Slipper Day. The four-year-old entire really hit the line strongly in the Futurity, splitting Sierra Sue and Tofane in the 1400m event on a Good track, so he should relish the rise to 1500m and some sting out of the ground on Saturday. He will get a beautiful run in transit from barrier four and be very hard to hold out.

The Epsom Handicap winner of last spring resumed in fine style in the Canterbury Stakes, storming home down the outside to run third behind Forbidden Love and subsequent Group 1 winner Lighthouse. The son of Al Maher gets out to 1500m which is going to be right up his alley, and with Riodini in this race applying some early pressure and injecting speed into the event, it should really suit Private Eye. The inside alley is a little query as his best wins have been out wide on the track, but he could just get the perfect run before pouncing on tiring leaders late. He goes on top for us.

Dalasan is one galloper who is deserving of a Group 1 victory, but he just hasn’t quite got the same ability as he once had. The South Australian has had 31 starts for seven wins and he is only a five-year-old, so a Group 1 on his future stallion CV would be ideal. In saying that, connections of the horse can’t be unhappy, as he has amassed over $3.2 million in stakes. Not bad for a non-winner. The son of Dalakhani comes through the Canterbury Stakes as well where he wasn’t awful, but he certainly didn’t catch the eye. If you are a loyal Dalasan follower, don’t drop off – but we couldn’t be recommending any new patrons join the ‘Dalasan Club’.

We have been disappointed with Riodini this preparation if we are telling the truth. The five-year-old gelding has always shown potential, and typically his go-forward racing style helps his chances, but he has been throwing in the towel a long way from home in his two runs to date, finishing 10th in the Apollo Stakes and then seventh in the Newcastle Newmarket. He will go forward and make his own luck, but we want to see him actually try before we back him again.

Former New Zealand galloper Bankers Choice went well in his first Australian start, running fifth behind two All-Star Mile fancies – Inspirational Girl and Zaaki – in the Group 2 Blamey Stakes at Flemington on March 5. The son of Mongolian Khan won three consecutive races in New Zealand prior to that, beating Coventina Bay in his last start on home soil. That mare has since won two Group 1 races and finished second in another, proving how good that form line is. He probably needs to go to another level, but he certainly isn’t the worst $31 chance.

Laws Of Indices was a Group 1 winner in France back in July last year in what was his second last start in Europe. The son of Power made his Australian debut in October, running a very good fifth behind I’m Thunderstruck in the $7.5 million Golden Eagle at this track and distance. In the entire’s two runs back this preparation, it is fair to say that he has had his chance without really threatening, but he is far from hopeless. We just would have liked to have seen a bit more from him this time in.

Colette is one of the more genuine horses getting around, especially on rain affected tracks. The five-year-old daughter of Hallowed Crown won the 2020 Golden Eagle at this track and distance on a bottomless track, and while it may not be as wet on Saturday, there will certainly be some moisture in the surface. The Cummings-trained mare was very good first-up behind Think It Over in the Apollo Stakes before being a touch plain in the Chipping Norton, but we are happy to forgive her for that. Now third-up and out to 1500m with James McDonald in the saddle – watch out!

Forbidden Love is the in-form horse of the hour in Sydney at the moment, having won back-to-back races by big spaces. The Canterbury Stakes winner bypassed the Coolmore Classic last weekend in preference to tackle the boys over 1500m this Saturday, and while we don’t think it was the smartest move, you certainly cannot knock her form. Drawn barrier two, the daughter of All Too Hard will go forward under Hugh Bowman and take some serious running down. She might just have a bit of her edge taken away from her if the track dries out, while horses like Private Eye could have her measure over 1500m.

Chris Waller and Kerrin McEvoy combine with last year’s Australian Oaks winner Hungry Heart in what will be the four-year-old’s second run this preparation. The mare by Frankel hit the line well behind Think It Over in the Apollo Stakes on February 12, but that was on her favoured Good 4 surface. With five soft track starts under her belt for only one runner-up performance, she is hard to have on a likely wet track. She won the Phar Lap Stakes 12 months ago at this track and trip, while she should be better second-up for those that are keen on her winning chances.

With the scratching of Converge, Hilal is left as the only three-year-old in this field. The Team Hawkes-trained colt has been racing very well this preparation, coming off a third placing to Converge and Anamoe in the Randwick Guineas. The son of Fastnet Rock has always been a length or two behind the A-graders, so he is going to have to go to another level on Saturday, but he has given every indication this campaign that he is ready to do so. He will get a good run from barrier six under Pike and he should be finishing his race off strongly. It’s just a matter of whether or not he has the class to match some of these top liners.