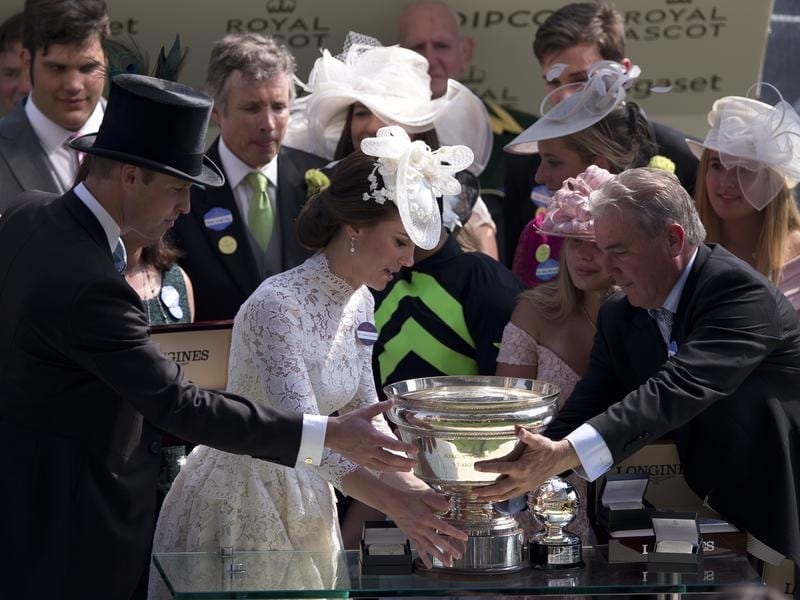 US trainer Wesley Ward (r) will have another strong team of youngsters at Royal Ascot.

A decade after breaking new ground at Royal Ascot, American trainer Wesley Ward is returning with a team of eight as hungry as ever.

The trainer was not well known in England when he first brought horses to Britain’s summer showpiece meeting but it did not take him long to make a big impression.

In saddling Strike The Tiger to win the Windsor Castle Stakes on the opening afternoon, Ward became the first American-based trainer to enjoy a Royal Ascot winner.

“It’s hard to believe it’s 10 years ago. The hairs are a little greyer now, but the time just flies by,” Ward said.

“I’d heard about Royal Ascot, but I’d never been and really knew very little about it. It was so far removed from anything we’d done before.

It did not take Ward long to double his tally, with Jealous Again blitzing her rivals in the Queen Mary Stakes the next day.

After enjoying two winners in as many days on his first visit to the Royal meeting, Ward could have been forgiven for thinking he had it cracked.

But he did not strike Ascot gold again until 2013, and insists he has never taken his success for granted.

“I think we’ve learned over the years you first of all need to bring a very sound two-year-old, which is tough to do for starters, and you need that precociousness and obviously ability,” he said.

“Every year we just try to omit the mistakes we’ve made in the past, and you learn something new every day.”

Ward has 10 Royal Ascot winners to his credit, with the magnificent Lady Aurelia registering back-to-back wins, in the 2016 Queen Mary and the 2017 King’s Stand.

The likeable trainer has no hesitation nominating the 2015 Diamond Jubilee success of Undrafted as the clear highlight with the horse beating Australian Brazen Beau in the sprint.

“Undrafted’s win was the top, for sure. For him to win a Group One on a big stage under Frankie Dettori, and for the Queen to present me with the trophy with all my family there – it was a day I will cherish for the rest of my life, as will my family,” Ward said.

While happy to reflect on his success, Ward is fully focused on this year’s challenge.

Lady Pauline was the first to arrive, only to meet with a shock defeat at Ascot last month and then suffer a minor trackwork injury which ruled her out of the Queen Mary.

“I’m very excited about the team. I don’t think I have a Lady Aurelia in there, but as a group they’re very solid,” he said.