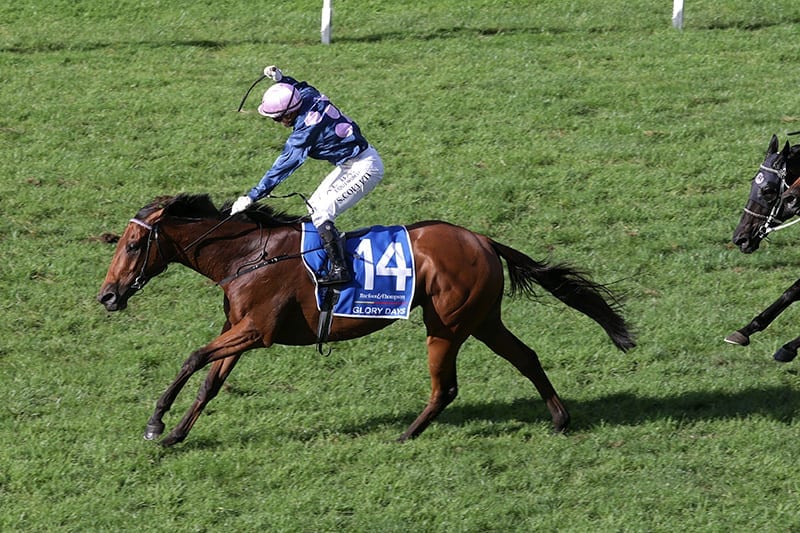 The next chapter in the fairytale story of Glory Days is set to unfold at Randwick on April 13, when the lightly-framed stayer contests the Gr.1 Sydney Cup (3200m).

Waverley trainer Bill Thurlow has confirmed that the last start Gr.1 Auckland Cup (3200m) winner won’t have another run until the A$2 million feature, with Corey Brown booked for the ride.

“His agent approached us, as did a few other agents over there,” Thurlow said. “He’s a class rider and he knows the track well obviously, and he is a very good two-mile rider, so he was the obvious choice really.

“She’s been up to Auckland and back and she’s a very athletic, fit sort of horse. Another run here and then a flight wouldn’t benefit her I wouldn’t have thought.

“We know her reasonably well and she will have a good hit-out here, make no mistake about that. It’ll just be more under jump-out conditions than race conditions.”

Thurlow said the bonny mare had come through her Auckland Cup victory well and would likely have a jump-out at Waverley on March 29 before flying out to Sydney the following week.

“She’s good, she was a bit tired for a couple of days following the Auckland Cup, but you’d expect that running two miles on a heavy track.

“She spent a few days in the paddock, then a few days light walking. She’s fine now, we’re very happy with her. She’s pretty much back into it now this week.”

Glory Days is raced by Thurlow’s brother Grant and his wife Patricia, along with friends Brent and Sue McAree.

“I leased a couple horses off Gloria Kenny from down in Marton and the boys had had one or two horses that had been a bit average,” Thurlow said.

“When we leased them we thought that as much as she was a pretty weedy little thing, she might be a fair chance if they were prepared to wait and they were. They were looking for a stayer.

“She’s a fine little thing, she wasn’t going to stand a long preparation as young horse. She had a couple of injury problems too when she was young, so maybe in hindsight that was blessing.”

Thurlow, who mixes dairy farming and training, has around a dozen horses in work.

“We’ve got some young ones we try and work up,” he said. “Racing-wise we’ve only got four or five and the rest are just babies we are educating.
“I don’t milk, I’ve got a couple of boys that milk. I get to the dairy farm two or three days a week and we’ve got a couple of other dry blocks that we run, so we just do that and do the horses.”

It is not the first-time an unlikely stayer from the South Taranaki town of Waverley has made headlines, with 1983 Melbourne Cup winner Kiwi also hailing from the region and Thurlow has been buoyed by the community support.

“It’s been quite amazing really. The support from our local community has been astronomical,” Thurlow said.

“The amount of well-wishes and people ringing and calling, people you sort of don’t even know that well, it has been really humbling. Everyone is part of it.”

Thurlow knows the competition in Sydney will be a step-up again as Glory Days will tackle runners owned by racing aristocracy, but he is looking forward to renewing acquaintances with Chris Waller, who did a short-stint with Thurlow many moons ago.

“Chris was only here about six weeks I think,” Thurlow said. “We were full-time milking then and he didn’t really like the cows very much.

“I think we had one old jumper we were working but it was more cows. Good on him, he left and went full-time into the horse industry and his story is absolutely amazing. It’s a real credit to him, for what he’s done. He did work for me for a little while but I don’t think I taught him everything he knows.”