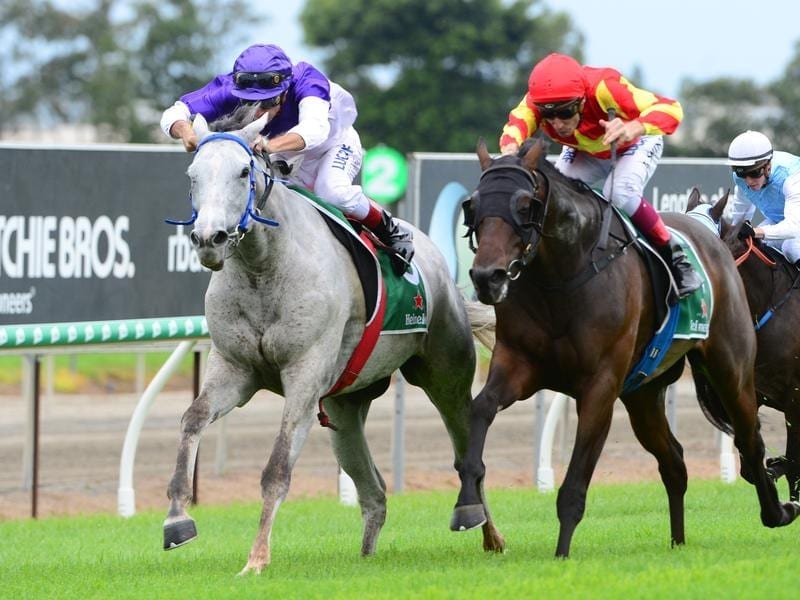 The Candy Man (l) has claimed his 6th straight win in a Gold Coast race and will return to the city.

Fan favourite The Candy Man is headed back to city racing after bringing up his sixth consecutive win.

Trainer Barry Baldwin elected to run The Candy Man in a Class Five race at the Gold Coast on Saturday and scratched him from a benchmark handicap at Doomben.

The grey has recorded his six wins since coming back from a career-threatening jaw injury which need 10 hours surgery.

The Candy Man was much too good for the Gold Coast field winning by three lengths on a heavy track.

“It boosted his prize money to just on $150,000 and hopefully it will be enough to get him into some of the better Brisbane races,” Baldwin said.

Baldwin said there were plenty of options ranging from Saturday’s Premier’s Cup to the Brisbane Cup in coming weeks.

Stella Victoria was also a Doomben scratching and will be monitored in the next few days before a decision is made on her next winter carnival mission.

The mare was rated one of the top chances in the Listed Bright Shadow Quality at Doomben but was withdrawn on race morning.

Co-trainer Chris Anderson said the mare had done well after her fifth in the Group Two Victory Stakes at her last start on April 27.

“But we just weren’t happy with her on Saturday morning and decided against risking her,” he said.

“However, we will just have to wait and see,” Anderson who trains the mare in partnership with Robert Heathcote, said.