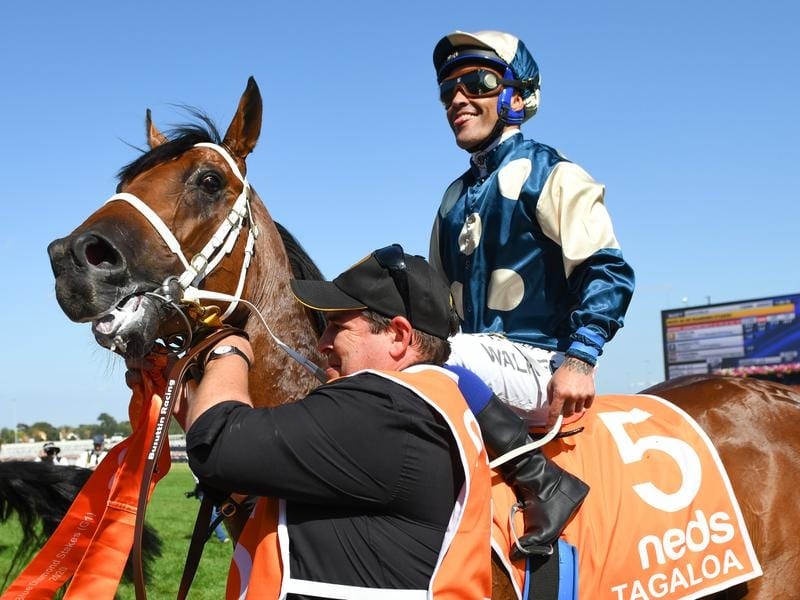 Blue Diamond Stakes winner is primed for the Golden Slipper after his second in the Todman.

Trent Busuttin is happy he listened to his head rather than his heart by giving Golden Slipper contender Tagaloa a lead-up race in Sydney.

Tagaloa won the Blue Diamond Stakes at Caulfield last month and the temptation was for the colt to head straight to Saturday’s $3.5 million Golden Slipper at Rosehill without another start.

Busuttin, who trains in partnership with Natalie Young, said Tagaloa’s defeat by Farnan in the Todman Stakes at Rosehill on March 7 served its purpose.

It means the training partnership can be easy on the colt leading into Saturday’s race while the race gave Tagaloa experience of racing right-handed.

“He had one soft gallop leading into the race after his Blue Diamond win and racing him in the Todman means we don’t have to be hard on him.

“Otherwise it’s a month between runs and you’re just doing it on the track.

“He got a bit lost that way round so I’m certainly glad we ran him to give him the experience under race conditions, rather than just working him.

“It also means we don’t have to do too much with him now, just keep him happy.”

The Gai Waterhouse and Adrian Bott-trained Farnan is the $5 Slipper favourite ahead of Tagaloa and Blue Diamond runner-up Hanseatic at $6.

The all-important barrier draw will be held on Tuesday.

The Ciaron Maher and David Eustace-trained Cellsabeel finished a close third in the Black Opal behind Barbaric and his stablemate Bartley, leaving her one spot outside the top 16 for the Slipper.

Maher and Eustace are likely to have four runners with Pago Pago Stakes winner Prague, Muntaseera and Away Game to join Cellsabeel.