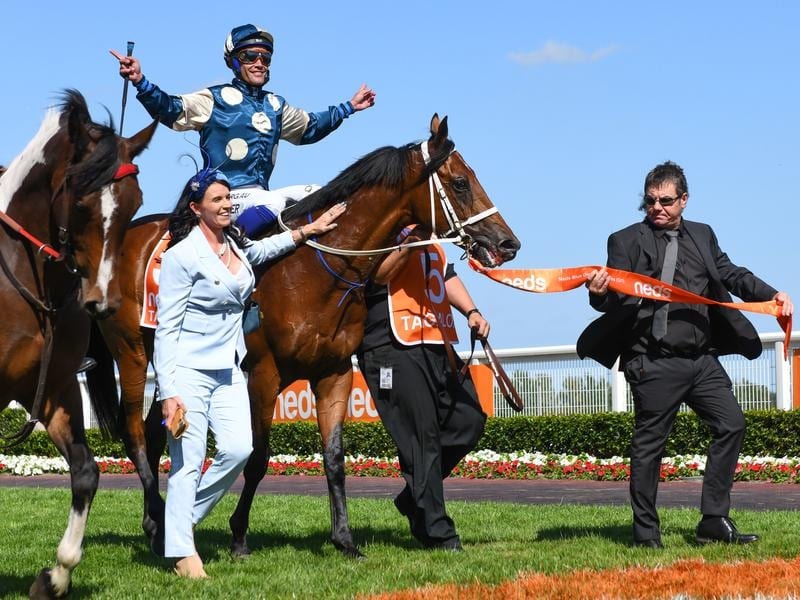 Tagaloa has triumphed for co-trainers Trent Busuttin and Natalie Young in the Blue Diamond Stakes.

Coming from New Zealand three-and-a-half years ago to set up a stable at Cranbourne, partners Trent Busuttin and Natalie Young were pigeon-holed as trainers of stayers.

With a focus on sprinters in Australia, Busuttin and Young set about changing the belief they could only train distance horses by becoming buyers at Australian sales.

It also provided the training, and life partners, their first Group One victory since making the move to Victoria.

Ridden by Michael Walker, Tagaloa ($26) scored by a head from the $2.60 favourite Hanseatic with Personal ($26) three-quarters-of-a-length away third.

Busuttin said when they arrived in Australia they had 20 horses that were ready to race.

“I love training stayers, and the Melbourne Cup is one race I would love to win, but it makes a big difference when we get overlooked for a lot of colts at the sales.

“Hopefully this can only help.”

Racing at Caulfield favoured horses on the speed and Tagaloa had to do it the tough sitting three wide outside the speed set by A Beautiful Night and Letzbeglam.

Taking over with 250m to run, Tagaloa drifted out under pressure towards Hanseatic forcing rider Tim Clark to look at the stewards film before declining to lodge a protest.

Busuttin knew Tagalao had improvement in him following the colt’s first-up fourth to Hanseatic in the Prelude at Caulfield two weeks ago.

“It was trainer error in the Prelude,” Busuttin said.

“We knew he was soft, but we didn’t realise how soft.

“I’m usually pessimistic when they get beaten, but I knew there was only a length and a half between us and the winner and I knew we had a couple of lengths improvement in us.

“He’ll be better next season, but if he wins the Slipper he might not be around next season.”

Busuttin declared Tagaloa Sydney bound for the Golden Slipper at Rosehill on March 21 after he contests the Todman Stakes (1200m) at Randwick two weeks earlier.

A track gallop at Cranbourne last Saturday had Walker confident Tagaloa could change the result from his Prelude meeting with Hanseatic.

“I had in my mind the other day that I would come out neutral on him and not ask him for too much speed, but today I knew he was fit and I was putting him there.

Tim Clark, who replaced the injured Luke Currie on Hanseatic said the colt had his chance.

“I had a lovely run, I started to get into it at the right time, presented like the winner but we just didn’t get past him,” Clark said.