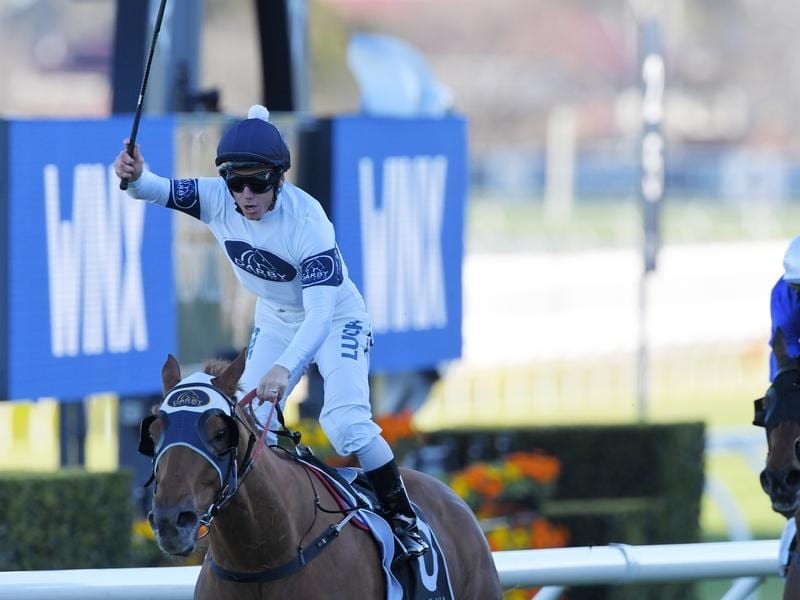 Samadoubt has outsprinted his big-name rivals to post an upset Group One victory in the Winx Stakes.

Tim Clark has pulled off a major upset in the first Group One race of the season with a bold front-running ride aboard Samadoubt to win the Winx Stakes at Randwick.

Leaving some of Australia’s best weight-for-age stars in his wake, Samadoubt ($31) took up the running, picked up the tempo approaching the turn and never looked like being run down.

Nine-year-old Happy Clapper showed he had returned in great heart with a brave half-length second, a neck ahead of Invincible Gem who held third after stewards dismissed a protest from Kerrin McEvoy aboard fourth placegetter Avilius.

Winning trainer Bjorn Baker was thrilled the race plan he hatched with Clark came to fruition, making Samadoubt the first horse to win the Winx Stakes (1400m) in the post-Winx era with the superstar mare having claimed the past three renewals.

“From Winx to Samadoubt, hasn’t it got a good ring to it,” Baker said.

“He’s a very good horse. He ran in the Breeders’ Plate as a two-year-old and we left that day disappointed but he’s been a great ride for the owners.”

Given the majority of Samadoubt’s rivals were middle-distance horses or stayers resuming, Baker and Clark decided to make the most of their horse’s natural speed and try to pinch the race.

Clark executed the plan to perfection, even though he worked harder to find the front than he anticipated.

“There’s obviously better horses in the race than him but on today and how it was going to work out, it was his chance to sneak away with one and that’s what he did,” Clark said.

“That last furlong was a bit long but great result.”

Avilius was sent out favourite and was doing his best work late to finish fourth, getting the tick of approval from Kerrin McEvoy.

“It was pleasing to see him run on like that over 1400 metres,” McEvoy said.

“It was a lovely first-up run.”

The disappointment of the race was $4.80 second favourite Verry Elleegant who again wanted to overdo things back in the field and was never a factor, finishing second last.

However, jockey James McDonald remained positive about her spring and said she had returned a more dour horse.

“They are just a bit sharp for her now, I think even at a mile they might be a bit quick for her, especially against these tough, older horses,” McDonald said.

“She’ll improve off it and don’t give up on her.”

Kings Will Dream, having his first start for Chris Waller and first run since breaking down in the Cox Plate, found the line resolutely for fifth while Unforgotten ran on nicely for sixth after struggling to find clear running in the straight.