Streets Of Avalon stamped himself as the horse to beat in next month’s The Archer (1300m) after another game run at Caulfield on Saturday.

The Shane Nichols-trained seven-year-old lined up in the Group 3 Victoria Handicap (1400m) and, after leading throughout, was run down late by the promising Ayrton ($2.80).

Streets Of Avalon ($13) had to concede 5kg to the eventual winner under handicap conditions, so the Group 1 winner should appreciate going back to a weight-for-age contest given that he ran third in the $5 million All Star Mile (1600m) at Flemington, losing to Zaaki and I’m Thunderstruck, while beating home the subsequent Doncaster Handicap (1600m) winner, Mr Brightside.

Nichols, who has never raced a horse further north than the Sunshine Coast, told HorseBetting that he is looking forward to the trip to Rockhampton for the inaugural running of the $440,000 race on May 7.

While the field for The Archer is only just starting to take shape, Nichols said that the idea of running was served up to him over 12 months ago over a cold beer at the Magic Millions Yearling Sales.

“A fella I drink beer with – we had a couple of beers at the back end of the Magic Millions Sales and he mentioned this race to me over 12 months ago and said ‘would you be interested?’, and I said ‘that does sound entertaining for us, I’d be more than interested’.

“It was always our intention to go if the horse was racing well enough.”

The trainer admits that his galloper surprised him when running third in the All Star Mile, but he was pleased to see that his plan of setting him for the race came off given that the horse didn’t receive enough votes to gain a start initially.

“Even though we weren’t going to get a run on the votes, I thought we were a big chance to get a run through attrition,” the trainer continued.

“It became my focus and we were rewarded with probably his biggest payday – I think in two Group 1s he hasn’t earned as much as he earned in the All Star Mile.”

Hindsight is a wonderful thing though, so Nichols is now confident that his horse will have the right form to be a winning chance in Rockhampton’s feature.

“He’s been beaten by Zaaki, I’m Thunderstruck and Ayrton in his last three, if any of those were running up there they’d be $1.05,” he said.

Getting to Rockhampton is the next task for Nichols and his $2.4-million earner, but he looks set to have a travel companion in Lindsay Park’s Crosshaven, who was announced as the latest runner for The Archer.

“I’ve never been to Rocky – I’ve been to Cairns and Port Douglas – but never Rocky,” Nichols said.

“They (Rockhampton Amateurs) were booking me for social events. There’s the barrier draw and the Ball and then the after party – I think there was something on every night for the week.”

Streets Of Avalon will return to Brisbane following his run in Central Queensland, following a similar path as Apache Chase.

Streets Of Avalon is a $26 hope in the Kingsford Smith Cup, while online bookmakers have him rated $51 in the Stradbroke.

Great article on a great horse and trainer .. and all his great connections. Good luck for safe travels to Rocky and back and a successful (winning) Archer run. 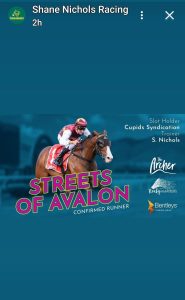