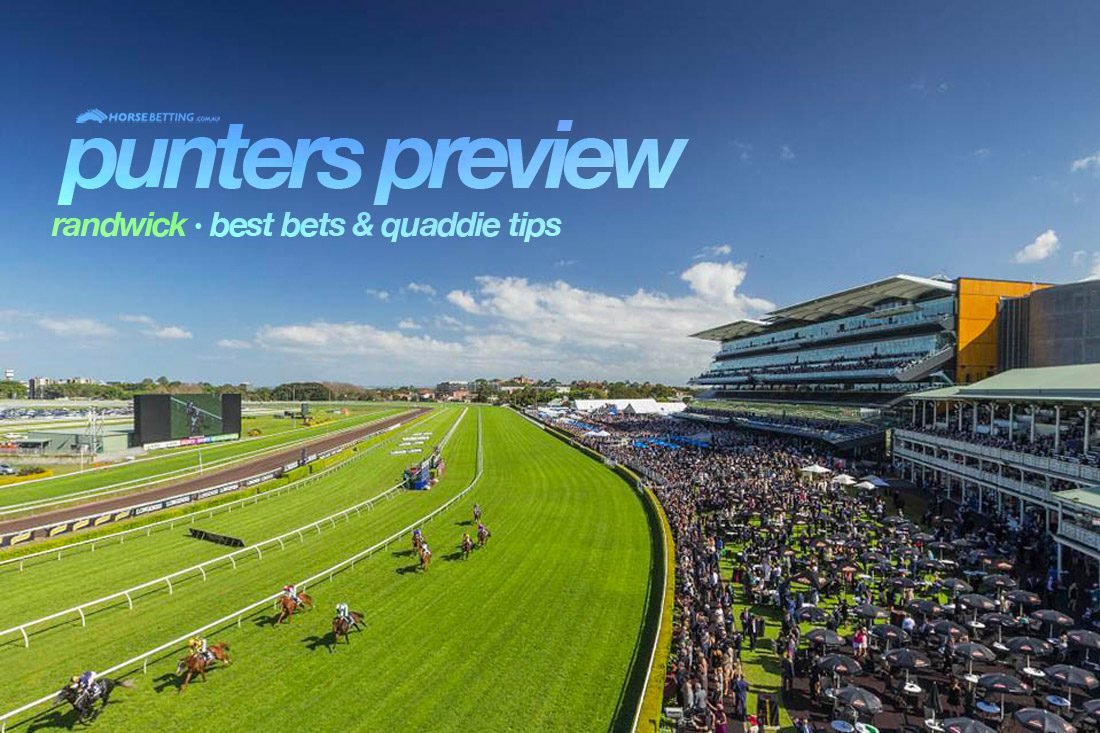 HorseBetting’s Sydney form analyst has previewed the bumper 10-race card at Royal Randwick on Saturday, headlined by three Group 2 races and the return of Nature Strip in the Group 3 Concorde Stakes. We’ve sunk our teeth into all races and come up with our top four picks for each, as well as our best bets for the day and suggested quaddie numbers. The track is a Soft 5, the rail is out 4m for the entire course, and the first race is set to jump at 11:40am AEST.

A competitive Highway begins proceedings on Saturday as a number of these runners stake their claim to earn a spot in The Kosciuszko in October at this track and distance. Parksville has opened as favourite after a good run in his Sydney debut last start on the Kensington track when third to Nags To Riches and Escape Artist, but now that Molly Nails has secured herself a start in the final field, we expect to see her start shorter than Parksville. Molly Nails ran second on debut at Dubbo 12 months ago, went out for a spell, then came back in and won her maiden at Wagga by 7.5 lengths, before winning the Canberra Guineas Preview over 1400m. The Matt Dale-trained mare then ran sixth in the Listed Canberra Guineas at the end of her last campaign. She has drawn beautifully in barrier two for Tim Clark, who will give her a big chance of resuming as a winner.

Named in the honour of the late Nini Vascotto, there will no doubt be plenty of added incentive to win this race. Spiranac for Rodney Northam and Glen Boss is another runner who will be looking to put her name up in lights as she searches for a spot in The Kosciuszko, and after a very good autumn campaign, there should be no reason why she can’t do so here. The five-year-old mare has finished seventh in both her metropolitan starts to date, but the first of those came in the Group 3 Triscay Stakes behind Tailleur, and the second came in the Country Championship Final on April 10 when only four lengths behind Art Cadeau. The daughter of Magic Albert has trialled well in preparation for her first-up assault and gets Boss in the saddle from a good gate (5). She certainly has the class for this.

We found our first Midway winner last weekend at Kembla Grange with Royalzel, who only just got there, but the acceptances for this week’s race haven’t made it easy for us to go back-to-back. It won’t be a race we’ll be betting in on Saturday, but for the sake of a tip, All Things looks to be over the odds at around $15. The John Sargent-trained son of So You Think has won two of his last three starts at Goulburn on Heavy tracks over 1400m and 1600m respectively and now sheds 3kg in weight while gaining the services of Hugh Bowman, who tends to find form this time of year. He looks a pretty versatile type, so barrier 12 won’t be an issue, and the 1800m should be right up his alley. His stablemate Love Me Quietly also looks to be over the odds at $31 and has shortened since markets went up on Wednesday.

We referenced the Canberra Guineas form in the opening race, and it is hard to go past it here as High Supremacy resumes after his autumn campaign. Trained by Richard & Michael Freedman, this four-year-old son of Savabeel ran second in the Canberra Guineas back in March, prior to going on to better races in the city which included two unlucky runs in Group 3 company. He finished second to Queensland Derby runner-up Senor Toba in the Frank Packer Plate over 2000m at Randwick and then disappointed as favourite in the Group 3 Rough Habit Plate at Eagle Farm prior to going for a spell. The 1300m will be short of his best, but the gelding is a winner first-up in the past and has drawn very well in barrier two for Hugh Bowman. He is a deserving top-weight in this race.

Back, lay, or watch? That is the question punters will be asking themselves prior to the running of the Concorde Stakes as Nature Strip kicks off his Everest campaign. The Chris Waller-trained speedster needs no introduction given he has won six Group 1 races and over $8 million in prizemoney, but we will take a walk down memory lane for the seven-year-old enigma. Nature Strip has run in the Concorde in the past two years, going down as an equal $2.20 favourite in 2019 when fourth behind Redzel, before Gytrash ruined the nation’s multi bets 12 months ago. Nature Strip was a $1.45 favourite on the latter occasion, and he is poised to start at the same price this Saturday. His trials have been good; he has drawn ideally in barrier four; James McDonald is on his back; his main danger, Wild Ruler, doesn’t appreciate wet tracks; and most importantly, there are no horses with the quality of Redzel or Gytrash in this field to spoil the party. You’re brave if you back him, but he looks to have this at his mercy.

The second leg of the Princess Series is set to take place on Saturday for the three-year-old fillies in the Group 2 Furious Stakes. Swift Witness was brilliant first-up to win the first leg of the series in the Silver Shadow Stakes at this track and distance a fortnight ago, so we see no reason to go against her again. The Gai Waterhouse & Adrian Bott-trained filly sat three wide without cover in the Silver Shadow, and even after being nearly headed and tackled by the race favourite, Four Moves Ahead, she kept enough in the locker to deliver a final burst and kick away again at the post. Four Moves Ahead meets Swift Witness 2kg better at the weights, but if you swap the two fillies’ runs last time out, you could easily mount a case that a 2kg swing wouldn’t have made any difference to the result. Add in the talented She’s All Class, who missed the run in the Silver Shadow due to lameness; Jamaea, who had no luck in the Silver Shadow; and Najmaty, who was hopelessly unlucky first-up at Caulfield – and we have a seriously good contest between our top three-year-old fillies.

There is no hiding the fact that we are massive fans of Zaaki and have a huge opinion of the horse, but $2.10 first-up at 1400m? Come off it! The seven-year-old gelding is the best horse in this field without a doubt, but we cannot entertain him at that quote, so we will be having something each-way on Randwick Guineas winner Lion’s Roar at $10 and $2.70. The John O’Shea-trained gelding has been in the quinella in two of his three first-up runs and has only missed the places once at Randwick when fourth in the Packer Plate behind Senor Toba and High Supremacy, which was a good form race. The son of Contributer has had two goes over 1400m, running second to Mo’unga in a maiden at Newcastle in a race that rated through the roof, before resuming in the Group 2 Hobartville Stakes last prep when finishing three lengths off Aegon. We hope to see Zaaki look even better than he was in Queensland, but from a betting perspective, we want to be with the Lion.

This is the hardest race of the day without a doubt given that there are quite a few different angles to look at it. On one hand, we have the horses that are out-and-out milers but need the tempo in the race, and on the other, we have plenty of class around a few stayers having their first- or second-up runs as they head on a Cups trail. That’s not to mention the international star Nancho, who hasn’t raced in over two years but will be looking to make it 11 wins from his past 12 starts on Saturday. There is not a great deal of speed aside from Fun Fact, but we expect to see Chris Waller’s gelding Shared Ambition roll along and be right there on the speed as well. The six-year-old son of Born To Sea broke his run of outs in the Group 3 Neville Sellwood Stakes (2000m) in all-the-way fashion, before being on the speed in the Hollindale Stakes when third to Zaaki at the Gold Coast. Barrier nine means Kerrin McEvoy will have to make a decision early, so we hope to see him go forward and catch them napping.

This is another tricky race, but we have to come to expect that at this time of year. King Of Sparta has drawn horribly in barrier 19, but in all honesty, it just gives us a better price. The three-year-old son of I Am Invincible was dominant last start at Kembla Grange, winning by more than three lengths in quick time over 1200m, and he stays at that trip again in this. James McDonald keeps the ride, which is a big advantage considering the poor draw, but this horse does look to be quite adaptable, so McDonald should have a fair few options. Saquon is a pretty handy galloper from the Paul Perry stable who comes from the provincial circuit and has to be respected.

There is a pretty smart mare going around in the final race of the day in Attishu. The Chris Waller runner has won her last five starts in style, with four of those being in New Zealand – including two Listed wins – before coming to Australia and winning in her debut here last start. The four-year-old daughter of Savabeel carried 55kg in Benchmark 88 company over 1400m last time out and now rises to 1500m and only has to carry an extra half a kilogram, so we expect her to be hard to beat again. Kerrin McEvoy retains the ride, and he will have to deliver a good one from barrier 13, but with the speed drawn outside and Bigboyroy two barriers to the inside, Attishu should get a cart across and then find a back to follow. She can be a real threat this Spring Carnival.