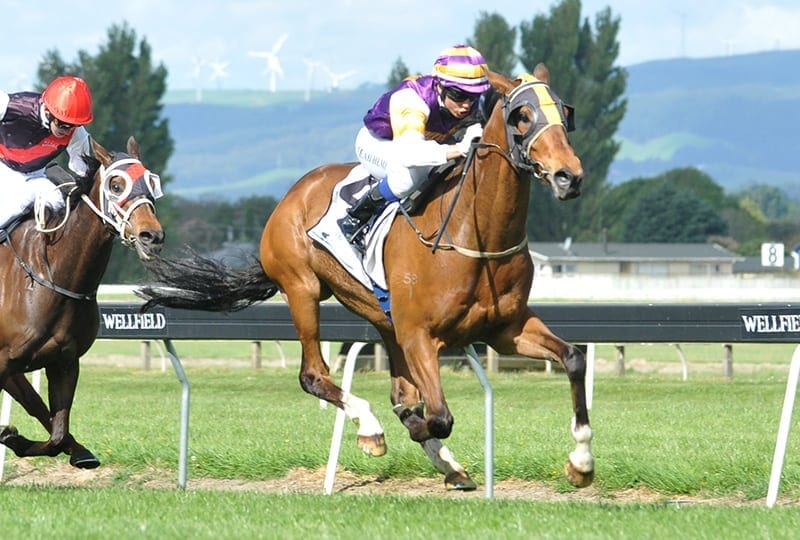 Opaki trainer Grant Nicholson plans to take a quiet approach to this season’s campaign with his talented galloper Nymph Monte.

Unlike the last couple of seasons in which Nymph Monte has been set for major races, Nicholson isn’t putting the same early pressure on the Tavistock gelding this term.

Nymph Monte was given a trial at Foxton last week and was an eye-catching second to Authentic Paddy, finishing strongly over the final stages in his 1000m heat.

“It was a nice little hit-out for him,” Nicholson said.

“He’ll start off at Waverley on the 18th (August) in an open 1400m race and we’ll just take it from there. I’ve got no set plans for him after that.”

Two seasons ago Nymph Monte won fresh-up at Te Rapa then, after a couple of fourth placings, he went on to contest black-type races in each of his remaining eight starts.

He won both the Listed Spring Classic (2000m) and the Listed Metropolitan Trophy (2500m) before finishing fifth in the Gr.3 New Zealand Cup (3200m).

Again last season he began well with fourths in his first two outings then a win over 2000m at Hastings. It was a victory that put him right in contention for the Gr.1 Livamol Classic (2000m), but he failed to flatter in the Hastings’ feature.

He did pick up a third later on, but was disappointing overall for the remainder of last term.

“He had a very interrupted season with one thing after another going wrong,” Nicholson said. “They were just little niggly things, but really affected him.

“I just want to get his confidence back. He’s a happy horse again and enjoying it so we’ll be guided by him.

“There’s no reason to push him this time.”