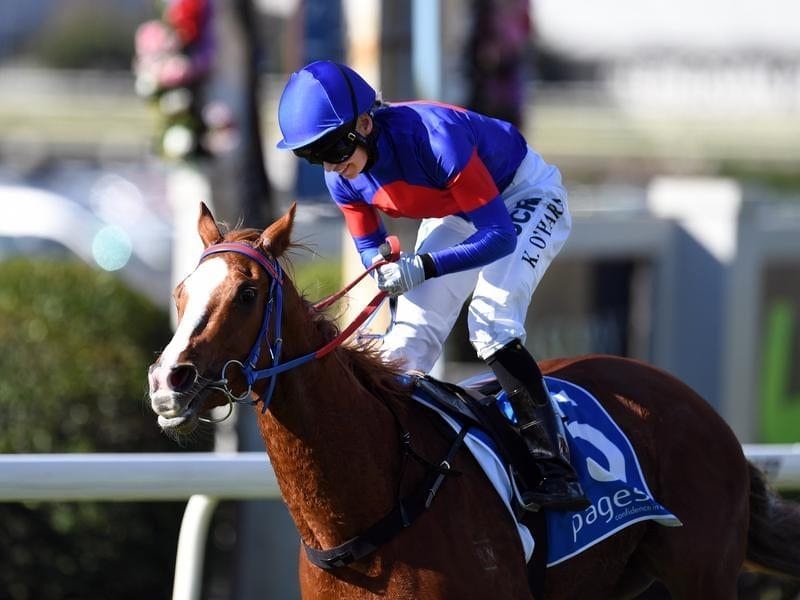 Single Gaze continues a Cups campaign in the Underwood Stakes.

Canberra trainer Nick Olive is delighted with the way Single Gaze is progressing towards her main spring goal.

The mare takes another step towards the Caulfield Cup on Sunday when she lines up against polished Group One performers Hartnell, Black Heart Bart and Bonneval in the Underwood Stakes (1800m) at Caulfield.

The mare missed last year’s spring carnival after a fall in the 2016 ATC Australian Oaks which came after her Group One win in the Vinery Stud Stakes.

It was 10 months before Single Gaze made her racetrack return and but she showed she was back with two wins and two seconds during a winter campaign in Brisbane.

The mare has had two runs this time in and Olive says she will relish the step up up to 1800m on Sunday.

Single Gaze finished towards the tail of the field in the 1400m Memsie Stakes at Caulfield on September 2 before running fifth to Humidor in the Makybe Diva Stakes at Flemington two weeks later.

“On face value it was ordinary, but it was a starting point,” he said.

The trainer was taken with her performance at Flemington.

“I thought she went well in the Makybe,” Olive said.

“She covered a lot of ground and had to make a sustained run out wide and was still strong on the line.

“I thought she was as strong as anything except for the winner.”

Single Gaze arrived at Caulfield before her first-up outing and has stayed at the course since.

Olive said he had gained confidence after the mare put in a strong piece of work on Tuesday morning.

After the Underwood, Single Gaze will head to the Group One Caulfield Stakes on October 14, a week before the Caulfield Cup.

“Our preparation has been awesome and she’s just got to take the step up now against this bit better class,” Olive said.

“She raced well in Brisbane during the winter but this is a step up on that.

“I feel she is stepping up to it and hopefully she does again on Sunday and if she does she’s a place chance.”