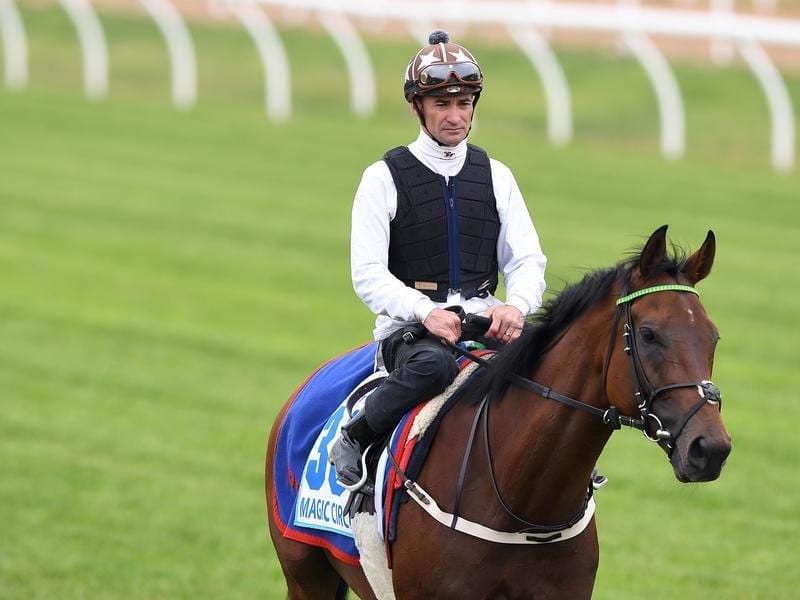 Corey Brown will be chasing his third Melbourne Cup win when he rides well-fancied Magic Circle.

Kerrin McEvoy and Corey Brown are already well-entrenched in the history of the Melbourne Cup as dual winners.

But the star Australian jockeys could join an even more select group if either can win the famous handicap, first run in 1861, for a third time on Tuesday when they both ride English-trained stayers.

McEvoy won his first Cup in 2000 on Brew before adding another 16 years later on Almandin.

Brown saluted for a second time last year on Rekindling after steering Shocking to victory in 2009.

The group of three-time winning riders are Glen Boss, Jim Johnson, Bill McLachlan, Darby Munro, Jack Purtell, and Damien Oliver who could add a fourth win on Tuesday when he rides Red Cardinal.

“Just to get a ride in the race is unreal,” Brown said.

“To win it twice is great. But I’ll be pinching myself if I did it a third time.”

Brown committed months ago to the Ian Williams-trained Magic Circle who is owned by the flamboyant Dr Marwan Koukash who has vowed to strip down to a G-string to accept the Cup.

Magic Circle was edging Cross Counter, a three-year-old by northern hemisphere time, for second favouritism on race eve behind Yucatan.

“He’s one of the guaranteed true stayers in the race,” Brown said.

“He has performed well over the distance or further. I think he’ll run well.”

Cross Counter suffered a setback just over three weeks ago with a cut to a leg but after riding him in a gallop last week, McEvoy says the horse seems really well and takes a strong form line into the race.

“Charlie wasn’t too worried about the little setback and he was fit before he got here,” McEvoy said.

“Obviously he had to have a few easy days because of it but he was nice and sharp the other morning and was travelling along well in his work.

“It’s a wide-open race. Obviously the favourite (Yucatan) is the one everyone is talking about but there’s 10 other good chances.

“Luck in running is going to play a huge part but I’ve got a horse there that can put up a bold show and run a great race.”

McEvoy was a long-time stable rider in both England and Australia for Sheikh Mohammed who is yet to win the Melbourne Cup after many attempts.

“It would be a huge thrill to repay the faith that Sheikh Mohammed had in me and to win his first Melbourne Cup for him would be a dream come true,” McEvoy said.