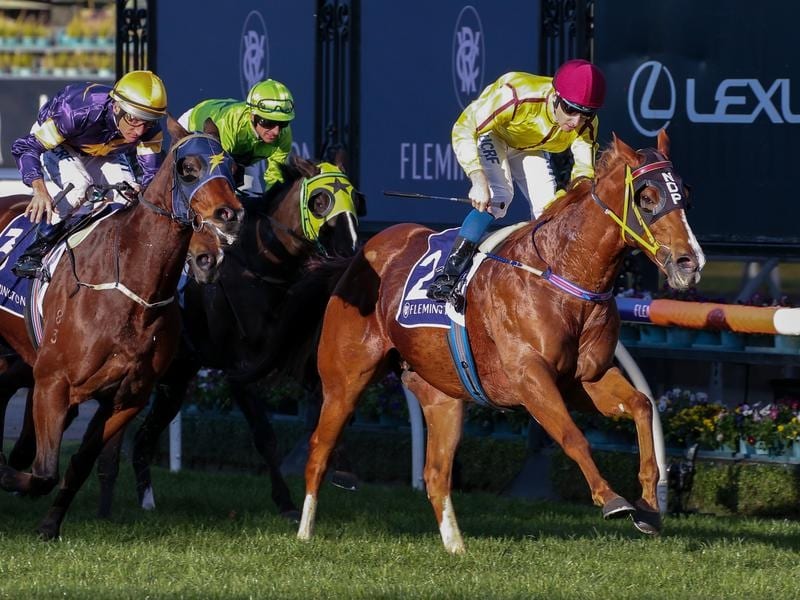 Malibu Style (r) has been freshened ahead of his tilt at the Aurie’s Star handicap at Flemington.

Off the back of a freshen-up and an impressive jump-out, consistent sprinter Malibu Style is poised for a bold showing in the Group Three Aurie’s Star Handicap at Flemington.

Perth trainer Neville Parnham believes the eight-year-old gelding is spot-on for Saturday’s 1200m straight-track sprint having been given four weeks between runs.

“He’s had a little freshen-up and we selected this race for the simple fact that he performs well up the straight,” Parnham said.

“His last attempt there he won at 1200 metres up the straight. We thought this looked a good fit for him.

“We put him in a jump-out last Friday at Flemington and he went super.

“Everything is on track for him to run well again in a race like this.

“I think he’s got a really good show on Saturday. The weights suggest he has got in OK, with Material Man being the topweight.

“I think he is in the race quite nicely.”

Former West Australian galloper Material Man is entered for his first start since joining the Pat Carey stable at Mornington and he has 59kg with Malibu Style next with 57.5kg.

Malibu Style sat outside leader Runson in his 800m jump-out last week around a bend, winning the heat from Vega Magic with grand campaigner Hartnell fourth.

“Lewis German rode him in the jump-out for me and he was glowing in his report,” Parnham said.

“He said he couldn’t hold him slow enough.

“It was a nice little clean-out and he’s ready to go now.”

Malibu Style has won 11 of his 56 starts and has done the majority of his racing in the past couple of years in Victoria.

He has won four Listed races and will be out to claim his first win at Group level.

Parnham’s son Chris has ridden Malibu Style in his past two starts in Melbourne but will remain in Perth to take what is expected to be a strong book of rides on Saturday.

The trainer has called on Damian Lane to ride Malibu Style.