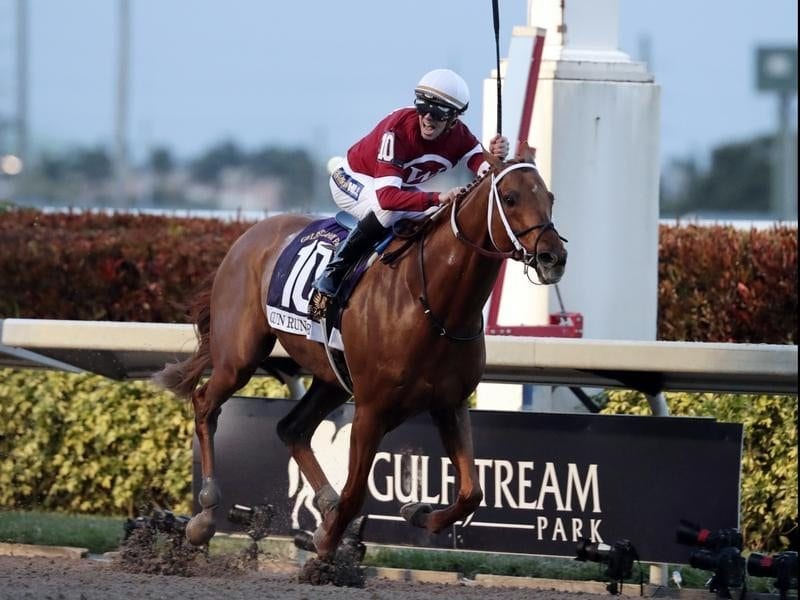 US Horse of the Year Gun Runner has ended his career with victory in the Pegasus World Cup.

America’s Horse of the Year Gun Runner has gone out a winner in his final race, claiming the Pegasus World Cup at Gulfstream Park.

Gun Runner pulled away from West Coast in the straight to earn $7 million ($A8.26 million) of the $16 million purse and ended his career on a five-race winning streak, all at Grade One level.

“Just so proud of the horse,” trainer Steve Asmussen said. “What a dream come true he is.”

Gun Runner started from barrier 10 of 12 and typically at Gulfstream starting that far from the rail can prove to be a tough challenge to overcome.

But jockey Florent Geroux eliminated the problem masterfully and quickly, getting Gun Runner to settle in behind only Collected very early in the race.

He made his move with about three furlongs (600m) to go. Gun Runner poked his head to the front, and he was gone.

West Coast stayed within 2-1/2 lengths for second, and Gunnevera was third, albeit more than 13 lengths behind the winner.

“He’s improved with every opportunity that he got,” Asmussen said.

“Even when he didn’t have success, he moved forward from it. He’s just a special individual and we’re so blessed to be in his presence.”

Gun Runner will retire with nearly $16 million in earnings. Only the now-retired Arrogate – Gun Runner’s top rival in 2017 and the winner of the inaugural Pegasus a year ago – won more money in his career.