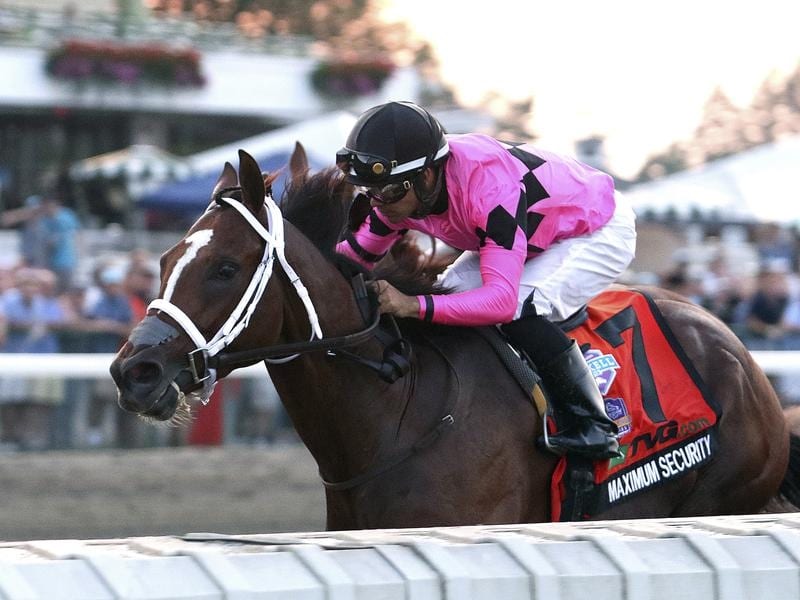 Maximum Security has been invited to the Pegasus Cup but owner Gary West says Saudi Cup is the aim.

Horse of the Year finalist Maximum Security is among 17 horses formally invited to compete in the Pegasus World Cup Invitational at Gulfstream Park.

But his owner Gary West has already indicated Maximum Security is more likely to go to the new $20 million Saudi Cup in February rather than next month’s Pegasus.

Maximum Security, an Eclipse finalist in two categories, was first across the line in last year’s Kentucky Derby before being disqualified for interference.

Past Pegasus runners Seeking The Soul, War Story and True Timber were also invited to the Pegasus, as was 2018 Preakness runner-up Bravazo.

The field is expected to be cut to 12 by the end of the week.

Irish mare Magic Wand, a Group One winner during the Melbourne spring carnival, has been invited to run in the $1 million Pegasus World Cup Turf Invitational on the same day.

Magic Wand was second in the Pegasus turf race last year, behind Bricks and Mortar – the likely Horse of the Year when the Eclipse Awards are announced at Gulfstream on January 23.

The Pegasus World Cup races will require horses to be medication-free on race day for the first time and will have substantially reduced prize money from the previous three editions of the event.

The Stronach Group, which operates Gulfstream, announced the significant changes to the purse structure and race rules last month.

Entry fees, which had been as much as $1 million for past runnings of the Pegasus, will be waived.

The inaugural Pegasus in 2017 was then the world’s richest race, offering $12 million to owners who put up $1 million for a spot in the field.