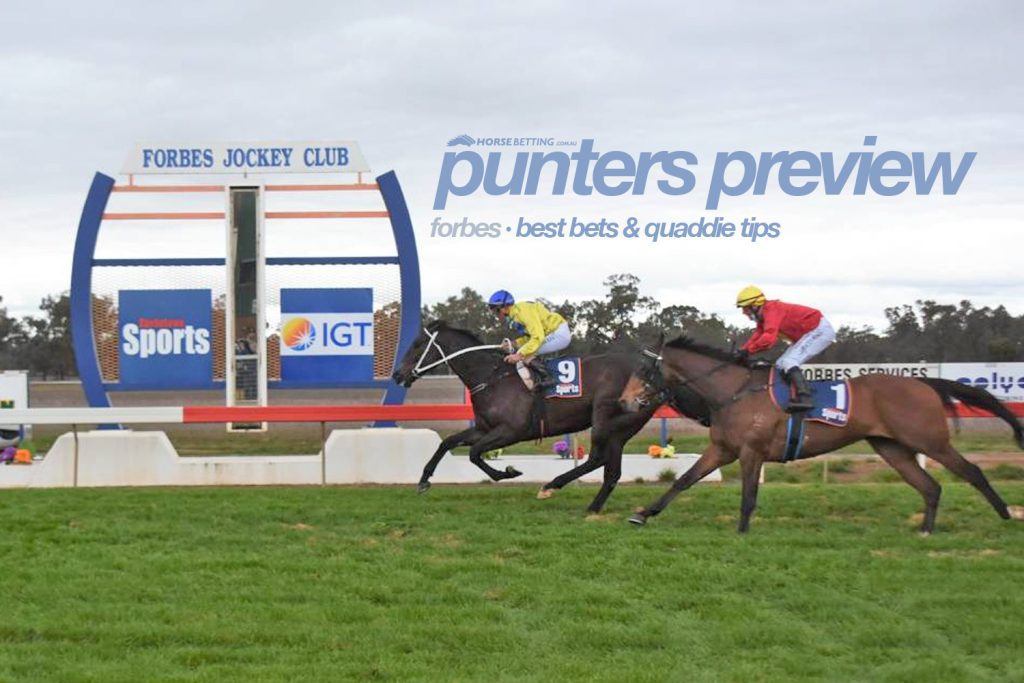 This year, the Forbes Cup is a qualifier for November’s The Big Dance. HorseBetting’s New South Wales racing analyst presents you with his best bets, quaddie numbers and feature selection for Sunday’s meeting at Forbes. The track is rated a Good 4, the rail is in the true position, and the first of eight races will jump at 12:20pm AEST.

The Forbes Cup looks a really winnable race for consistent mare One Aye to take out. The Barbara Joseph, Paul & Matt Jones-trained four-year-old is coming off a last-start third behind the unbeaten Frumos at Rosehill Gardens and that was on the back of a six-length trial win. While barrier 14 is far from ideal for this daughter of Super One, Quayde Krogh should be able to slot in somewhere in the first half of the field if he is to give his mount the best chance of winning. The run behind Frumos should have her cherry ripe for this.

Moetta was far too good for her rivals at Gilgandra on July 13, sitting up handy to the speed and racing away to win by 2.3 lengths over 1000m. The Brett Robb-trained five-year-old carried 57kg that day, so the big drop to 52kg should be well received on Sunday, once Jake Barrett’s 3kg claim is taken off. From barrier six, the daughter of Uncle Mo should be in the first couple of runners once again as she looks to record another victory. While the 1200m has proven to be a bridge too far in the past, the big weight relief can be enough to see her eat up the six furlongs, especially given the strength and ease of her last-start success.

Flying Justice showed enough in the Peter & Will Hulbert stable to suggest a win at Forbes wouldn’t be out of reach, so we are going to have something on the filly by Flying Artie. In six career starts, the three-year-old hasn’t finished in the top three, but she has run fourth twice in races where the form has been solid out of. She had no luck with barriers when trained in Brisbane, but the barrier gods have been kind to new trainer Clint Lundholm, as she will come out of barrier five on Sunday under Serg Lisnyy. She will go forward and give them something to catch at the nice price available with online bookmakers.