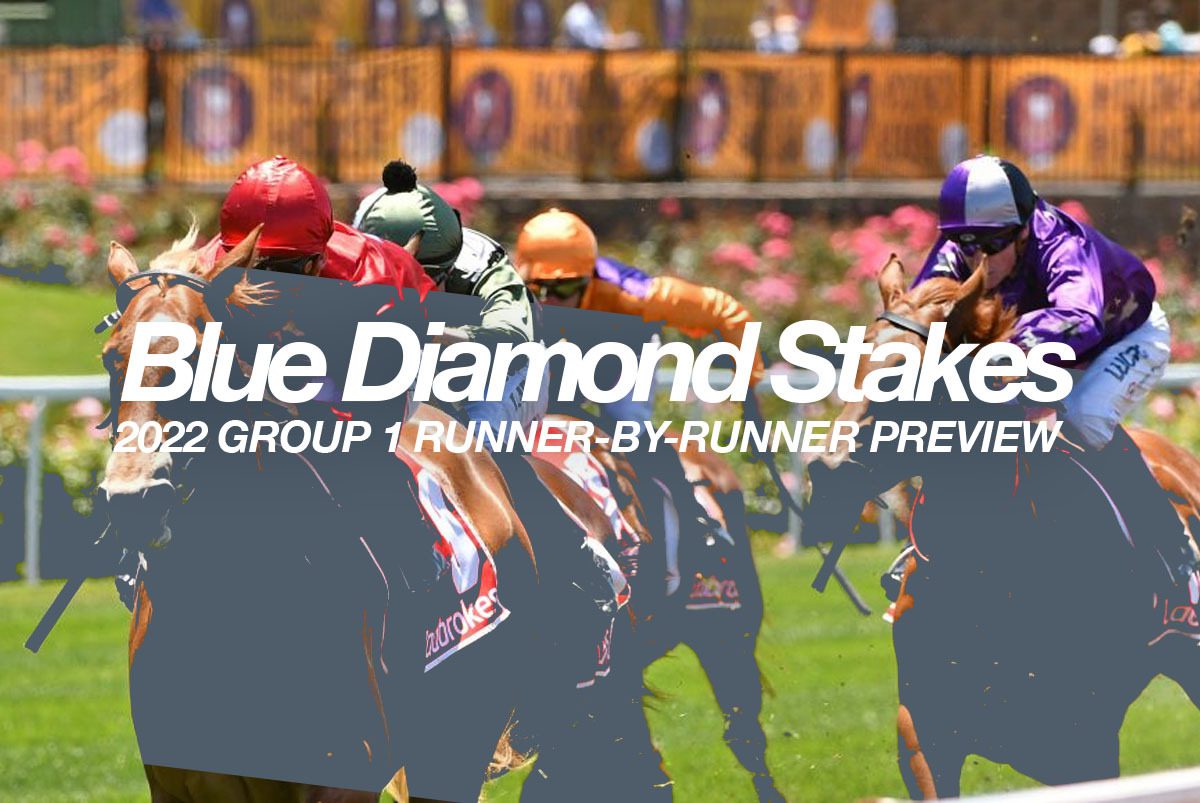 The 2022 Group 1 Blue Diamond Stakes takes centre stage on Caulfield’s nine-race card this Saturday afternoon as a capacity field of 16 two-year-olds compete for a $1,500,000 purse.

The Mick Price & Michael Kent Jr-trained Jacquinot is a $4.60 favourite with Sportsbet, whilst Blue Diamond Prelude winner Revolutionary Miss ($8) will be looking to build on her previous Group successes.

On paper Miss Roseiano, English Riviera and Waltz On By look set to provide a genuine tempo throughout, whilst the likes of Revolutionary Miss and Jacquinot will need to be at their best to finish over the top of their rivals from the rear of the field.

Following a debut win in the Inglis Banner on Cox Plate Day, the Team Hawkes-trained Semillion returned from a 16-week spell when finishing second to Lofty Strike in the Blue Diamond Prelude (C&G). Having settled outside the race leader on the back of a very fast tempo, the Shalaa colt was always going to be found wanting late, thus Lofty Strike finishing over the top of him. He was only run down inside the final 50m and was doing enough to hold out Daumier in third. He draws barrier eight on Saturday, and we expect to see Semillion settle in the moving line with cover one or two pairs back from what looks set to be a fast-run race. He looks to have plenty of class, and he is one to throw in trifectas and first fours.

On the back of a smart win in the Prelude, Lofty Strike is our top pick in the 2022 Blue Diamond Stakes. Having settled well back in the field, the Snitzel colt made up significant ground in the home straight before really powering to the line and running away from them inside the final 50m. He looks to be a horse with plenty of ability, while he holds victories against a few of his main rivals in this race. The wide barrier of 13 should not be a hindrance to his chances, as Jamie Mott should look to have him settled towards the rear of the field. His turn of foot is electric and should be enough to give Julius Sandhu his first Group 1 win as a trainer. Scratched.

Having trained Artorius to victory in this race last year, Anthony & Sam Freedman will be looking to replicate that success with the Godolphin-owned Daumier. The Epaulette colt finished third behind Lofty Strike and Semillion in the Prelude and needs to make up close to two lengths on the eventual winner. His debut win over Rampant Lion wasn’t anything to write home about, so a win would certainly surprise here. We anticipate a midfield finish for Daumier.

Having absolutely bolted in the Group 3 Chairman’s Stakes on February 5, Sebonack will be looking to remain undefeated as he steps out for just his second start. He gained a perfect run in transit in the Chairman’s, settling on the heels of the leader throughout, and when a gap appeared he quickened nicely and put the field away with plenty left in the tank. Following the win, Wayne Hawkes was very bullish about the colt, but from barrier eight, with his racing pattern in going forward and looking for cover, he will need some luck early on. We are worried he may be trapped wide throughout and are happy to let him go around without our hard-earned on.

The Ciaron Maher & David Eustace-trained Counttheheadlights finished fourth in the Prelude but wasn’t making too much of an impression over the final 200m. He may be looking for the 1200m and from barrier seven will need a touch of luck early on so he does not get trapped wide. The colt will need to settle in the first half a dozen if he is to win this, with a few of his rivals having a stronger turn of foot than he does.

The Blue Diamond Stakes favourite comes from the Mick Price & Michael Kent Jr stable and will be looking to bounce back from an unlucky fifth in the Prelude. Having drawn barrier one, Jacquinot needed more luck than a four-leaf clover can give considering he looks to get back and run on. He made his task even tougher when blowing the start at the barriers but showed enough to say he will be hard to beat on Saturday. Trainer Mick Price wanted him to draw the middle of the field, which is what he gets it might come down to whether he can sustain the sprint the longest. He is a deserving favourite on the back of his debut win over this track and distance, and if reproduces anything near that, he should be fighting out the finish.

The Peter Moody-trained Rampant Lion returned from a 16-week spell with a narrow defeat to Daumier in the Blue Diamond Preview (C&G) on January 26 when taking a sit off the speed. He has not been beaten too far in his two career starts but comes into the race as one of only four maidens. From barrier six, Kerrin McEvoy will look to have the Frankel colt settled in a prominent position throughout. He is an $18 chance with online bookmakers, we think he lacks the killer instinct that some of his rivals possess.

Another one from the Peter Moody stable is the Written Tycoon colt Merchant Prince, who is set to go around as one of the rank outsiders in the field. He finished second behind Sir Bailey at Sandown last week in a much weaker race than this and looks to be severely out of his depth at Group 1 level.

The Annabel Neasham-trained Flashing Steel is set to go around as the rankest of all the outsiders in the race, having been well beaten in all three career starts. The Not A Single Doubt colt finished eighth in the Pierro Plate last time out and was beaten some five lengths by Golden Slipper fancy Best Of Bordeaux the start prior. That type of form simply does not cut the mustard in this.

Despite coming out of just a maiden at Bendigo on February 6, we are giving Hafey from the Maher & Eustace stable a chance at a double-figure quote. Having settled a distant last in a five-horse field, the I Am Invincible colt managed to cruise up to the lead inside the final furlong and absolutely bolted in by close to four lengths with plenty left in reserve. The booking of Craig Williams stands out, and from barrier 14 he will need to take Hafey back in the running once again. This horse brings an element of the unknown to this race, and if he can produce a similar turn of foot to what he showed on debut, we think he is this up to his neck.

The Peter & Paul Snowden-trained Revolutionary Miss is without a doubt the best of the fillies in the Blue Diamond field, and she showed that in the Prelude. Having come down from Sydney following a distant second in the Group 3 Widden Stakes, the daughter of Russian Revolution exploded out of the ground late and claimed Miss Roseiano inside the final 50m. Having run the Prelude faster than the colts and geldings, she brings proven form to a race like this. She looked to have plenty left in the tank at the end of the 1100m, so the step up to 1200m should be ideal with Jamie Kah on board and is our top tip in the 2022 Blue Diamond Stakes.

Having only been beaten three-quarters of a length by Revolutionary Miss, the Peter Gelagotis-trained Miss Roseiano must be given some chance on Saturday. Having settled outside the leader in a quickly run race, she was always going to be vulnerable in the home straight. She showed a kick despite laying in under pressure and was only worn down by the eventual winner in the shadow of the winning post. With a similar tempo expected throughout, she may be looking for air inside the final 100m, but she is still a genuine first-four hope.

Mathew Ellerton sends his Sepoy filly Kiki Express to the Blue Diamond following a less than ideal effort in the Prelude. She was beaten over two lengths on that day and looks to be out of her depth here. She needs plenty to go her way from barrier three, and outside of a miracle, it is hard to see how she threatens in a race like this.

The Tony & Calvin McEvoy-trained English Riviera led the field up in the Fillies Prelude but was found wanting inside the final 100m when beaten 1.5 lengths. The Deep Field filly looks to be one of the race leaders on Saturday, but with this set to be a more highly pressured affair, she may struggle to keep up over the final furlong. She will need to go to another level above what she has shown so far in her career, and on that basis, it is hard to be with her in this.

Waltz On By may be Peter Moody’s best chance in the race, as she has drawn barrier one and looks to be a natural front-runner. She offered a kick last weekend in the Talindert Stakes when running into the smart I’mlovin’ya. With Blaike McDougall on board and drawn the rail she looks the main speed influence in this, although she will need to go to a whole new level than what she showed last week. The 1200m looks to be up her alley, and she is not the worst horse going around in this – despite the $26 on offer at Neds.

The James Cummings-trained Seven Sisters comes through the Fillies Prelude and looked to be doing her best work late from the rear when defeated just under two lengths. Having already won at 1147m, we know she will handle the step up to 1200m and will most likely be the one having the last crack at the leaders. She lacks the class of some of the more fancied types, but if she can settle closer to the speed than what she did last time out, then her turn of foot will have her looking like a top prospect approaching the final 300m.