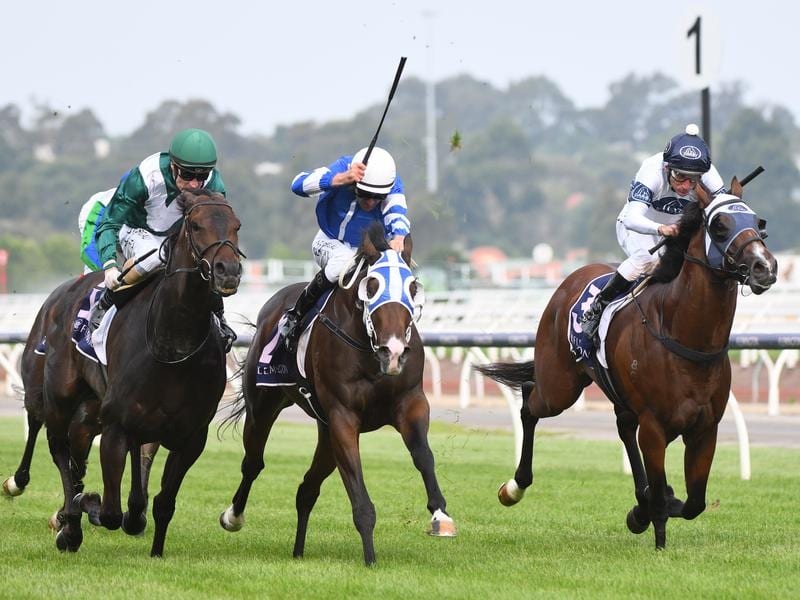 Time To Reign (R) will return to Melbourne for the Rubiton Stakes at Caulfield.

Time To Reign will return to Melbourne for the Rubiton Stakes at Caulfield after a less than happy experience at Flemington.

Trainer Gary Portelli has also entered him for the Eskimo Prince Stakes at Warwick Farm but said although the colt liked rain-affected tracks, Sydney might be too wet.

The colt will be ridden by Dean Yendall who has had a successful association with syndicators Darby Racing, winning the 2016 Spring Champion Stakes on Yankee Rose and riding the filly to third in the Cox Plate.

“We will make the final decision after he gallops on Tuesday morning,” Portellli said.

“Looking at the weather forecast it is going to be very wet in Sydney.

“It was a heavy track for the trials here this morning (Monday) and while he likes a soft track, I’m not so sure about really heavy.”

Damien Oliver was aboard Time To Reign when he ran fourth of five in the Kensington Stakes (1000m) on January 18, finishing less than a length from the winner Bold Star.

He pulled up with a respiratory issue but Portelli said he had shown no signs of any problems since his last race.

“My vet checked him out and he’s fine,” he said.

Time To Reign is a half brother to the Portelli-trained She Will Reign, winner of the 2018 Golden Slipper.