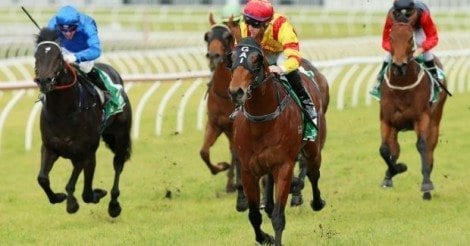 IT was a memorable day for Adrian Bott who scored his first win for Tulloch Lodge, in partnership with Gai Waterhouse, when Thronum won the Rosebud at Randwick on Saturday.

It was the newly-formed partnership’s first success and it happened to be at stakes level as talented three-year-old Thronum led all the way in murky conditions at Randwick.

“We wanted the colt to be right on the speed,” co-trainer Gai Waterhouse said. “We knew if he jumped cleanly and took control of the race, they wouldn’t catch him.”

Now a winner of three from four starts, the son of Snitzel will head to the Golden Rose which has been the plan since day one according to Bott.

“Incredible way to starts things, have to pinch yourself,” Bott said. “We were pretty confident.

“We’ll keep her going. The long range plan has always been the Golden Rose.”

Winning jockey Tommy Berry ambushed the post-race interview with Bott which showed just how much the win meant to the entire Tulloch Lodge team.

“This bloke he dug deep. He stepped away a lot better. Still a bit wayward in the straight.

“He’s going towards the Golden Rose – whether he’s good enough to win it, we might need a track like today.”

Thronum was on the second line of betting at $3.30 and is still a $26 chance at Sportsbet for the Group 1 Golden Rose.

Race favourite Mediterranean ($1.70) got back in the field against the track bias and flashed home late to narrowly miss the prize for punters.

It will likely head towards the Golden Rose as well where it’s currently priced at $13 with current favourite Capitalist taking most of the money at $4.80.