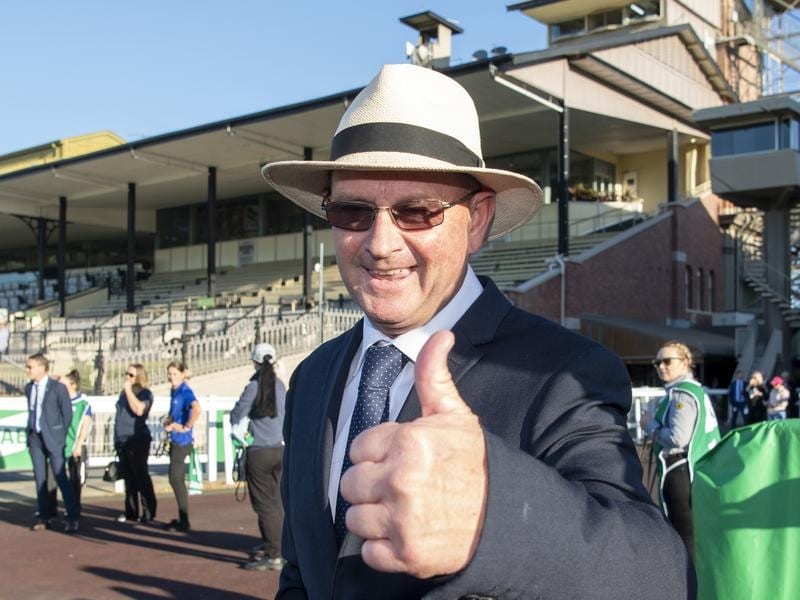 Tyzone has given co-trainer Toby Edmonds a Group One breakthrough in the Stradbroke Handicap.

A plan that was a year in the making came to fruition when Tyzone won the Stradbroke Handicap at Eagle Farm.

Tyzone ran second in last year’s Stradbroke behind Trekking and trainer Toby Edmonds immediately set him for a return bout this year:

Starting at $14, Tyzone charged down the middle of the track to beat Madam Rogue ($51) by a head with a long head to Niccanova ($14) in third.

Tyzone ran 1 minute 20.43 seconds which broke the 1400m course record that had had been set one race earlier by Rothfire.

Toby Edmonds, who is in the first season of a training partnership with his son Trent, got his first Group One winner after having four previous seconds.

Winning jockey Robbie Fradd, a South African who has ridden Group One winners around the world, also got his first Queensland Group One.

Trent Edmonds said it had been an emotional ride to getting the stable’s first Group One win.

“I am just a johnny-come-lately but people like Dad slog along for years trying to win big races,” he said.

“I am so thrilled for him. We felt Tyzone could win the Stradbroke after his second last year.

“We had looked at giving him a long spell but in the end he has raced in the spring and the summer.

“He isn’t very big and when he got in with only 52kg we were really buoyant. But then he drew very wide and we were a bit deflated.

“People kept telling us not to worry about barriers at Eagle Farm and they were right.”

Tyzone will now have a break before heading back south for the spring carnivals in Sydney and Melbourne.

“Who knows we might even be back for another Stradbroke next year,” Edmonds said.

Tyzone is one of the few horses to start his career in country Queensland and win a Group One.

He had his first start at Townsville in February, 2016 and has now had 17 wins.

The gelding is raced by a syndicate headed by North Queensland businessman Tom Hedley who has had a lot of success in country areas.

Fradd said he had got a nice run into the race and had found the right part of the track.

“He really can sprint and with his lightweight he was going to be hard to beat,” Fradd said.

“It is fantastic to get the local Group One hex off my back.”

Jockey Jason Taylor went close to winning his second Stradbroke on Madam Rogue after scoring in 2011 on Sincero.

“He just couldn’t get to where he wanted early but he did us proud,” he said.

The favourite Dawn Passage had to do too much work to race near lead and dropped out to finish midfield.