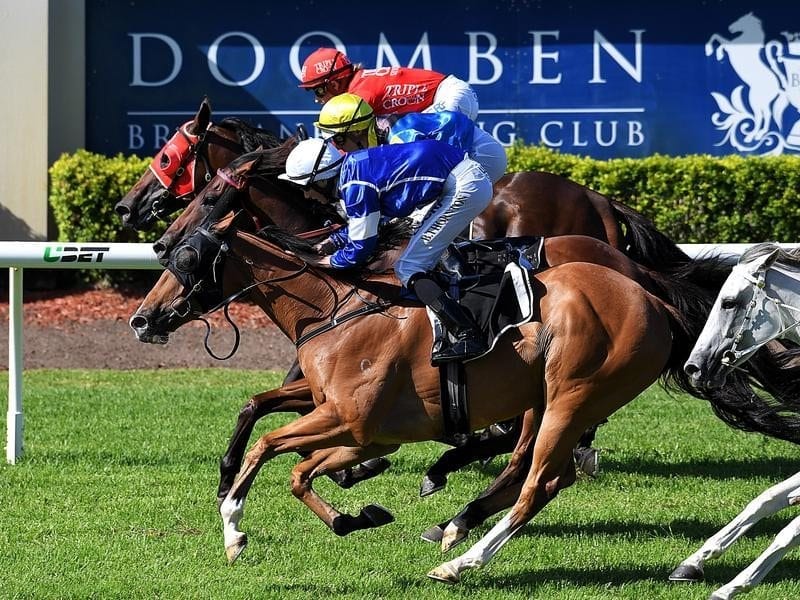 Desmon’s Pride (outside) has given apprentice Boris Thornton a breakthrough win in Brisbane.

Apprentice Boris Thornton scored his first Brisbane Saturday metropolitan win but not before plenty of drama at Doomben.

Thornton drove the favourite Desmon’s Pride ($2.90) to a a half-head win over Courtza King ($3.50) in the Relaxed Racing Handicap.

However, Ruby Ride who rode fourth-placed Rosie Posie fired in a protest alleging interference from the 700m to the line.

In a sometimes heated protest hearing, Ride said Thornton had laid in on her mount and then checked her in the straight.

“It cost me a win for sure. He was yelling, tightening me, abusing me the whole way,” Ride said.

However, Thornton said he had been entitled to hold his line and the incidents had cost him a bigger winning margin.

“I lost my iron and had to get back into it. I should have won by two lengths,” Thornton said.

After several minutes of deliberations stewards dismissed the protest.

Chief steward Allan Reardon said both horses had been disadvantaged by the buffeting and the stewards could not find it was enough to uphold the protest.

Thornton, who is riding in Brisbane on loan to Brian Smith, has ridden several winners at the provincials and midweeks since moving north but it was his first on a metropolitan Saturday.

Meanwhile, reformed rogue Tarzan will be rewarded for his new attitude to life with a chance at winter carnival sprint races following another win at Doomben.

Tarzan was once best known for his wayward behaviour in the barriers and early in his races but his took his recent record to five wins from six starts.

Trainer Stuart Kendrick has put a lot of time into Tarzan and gets an extra kick out of his wins.

“He played up at the start and we had to take him back to the trials. We took nose roll off him and him and decided to let him stride to the lead and keep going,” Kendrick said.

“Once he finds the rails he is always very hard to beat. Luke Tarrant also seems to have developed an affinity with him and that was the third time he has won riding Tarzan.”