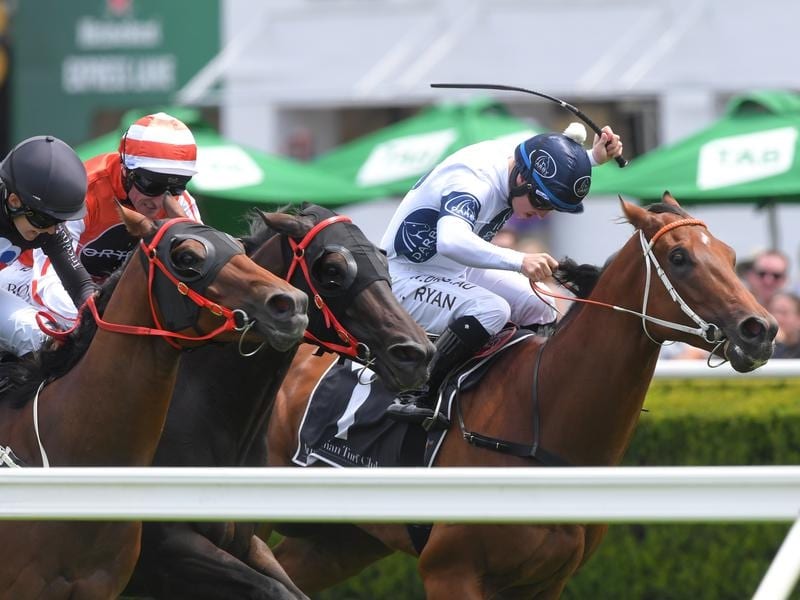 A gelding operation is set to bring out the best in Randwick winner God Of Thunder (right).

The tough decision to geld God Of Thunder could reap dividends this autumn as Hawkes Racing prepare to raise the bar for the talented sprinter.

The four-year-old resumed with a last-stride win in the Radisson Blu Hotel Sydney Handicap (1000m) at Randwick on Saturday, a week after missing his scheduled resumption at Warwick Farm when that meeting was washed out.

Co-trainer Michael Hawkes said the delayed start had forced them to rejig his campaign, which was to have included a shot at the Group One Oakleigh Plate next weekend.

“He was supposed to run last week then second up in an Oakleigh Plate,” Hawkes said.

“Now we may head towards the Challenge and maybe the Galaxy.”

While the Hawkes team like to keep plans for horses fluid, one thing Hawkes is certain of is that the decision to geld God Of Thunder has been crucial.

The horse has always shown promise but his trainers felt he could do better if his mind was solely on racing.

“It’s a hard thing and people don’t like doing it. You’ve got to do it when you know the time is right, otherwise you lose horses,” Hawkes said.

“Truthfully, this bloke was probably on the verge of being lost. We probably got him just at the right time.

“Gelding has definitely turned this horse around and it was a pretty tough win today.”

God Of Thunder ($2.60 fav) settled back in the field for apprentice Brock Ryan and once he shouldered into the clear, the horse unleashed his trademark strong finish to nail Miss Exfactor ($11) by a half-head.

Royal Witness ($11) was the same margin away third.