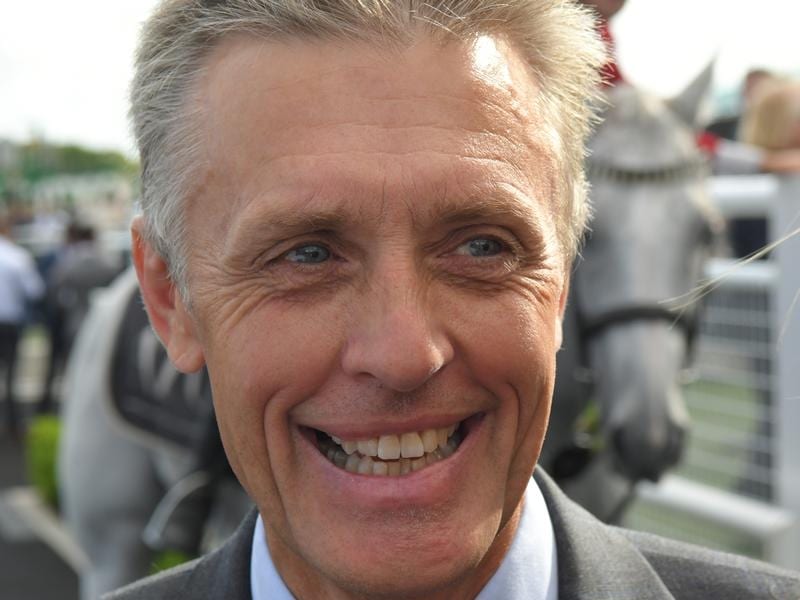 Mark Newnham is hopeful that is undefeated three-year-old Shadow Devil can continue on his winning ways in Saturday’s $750,000 Inglis Sprint (1200m) at Flemington.

The colt by Capitalist has made a faultless start to his racing career, winning his two career starts at Gosford over the summer months.

Shadow Devil was dominant on debut on December 29 over 1100m, greeting the judge more than two lengths in front of Transformation and Legend Rules in a Colts, Geldings & Entires Maiden Plate, before once again defeating the boys in a Benchmark 64 over 1200m.

Apprentice hoop Tom Sherry has had everything to do with the unbeaten galloper, but he will be replaced by 126-time Group 1 winner Damien Oliver.

Set to line up in the rich Inglis Sprint at Flemington this weekend, Newnham has told Racing.com that the horse is “above average” and is capable of winning his third career start.

“I thought he’d make an Autumn Carnival horse and being an Inglis horse, three-quarters of a million (dollars) down the straight and Damien Oliver to ride sounds like a good formula,” Newnham said.

“He’s a good colt. He has been restricted to two starts being a late foal, so it took him a while to get him going but anyone who saw his last win at Gosford, where he was still running up backside at the furlong, he got out late and really powered through the line, so he’s above average.”

Shadow Devil was originally passed in at the 2020 Inglis Australian Easter Yearling Sale at $180,000, but he was then snaffled up by Sweetbriar Equine Pty Ltd for $135,000 in Round 2 of that sale.

In his two wins to date, Shadow Devil has won just shy of $50,000 in prizemoney, so a top two finish on Saturday would see him pay his owners back for their original outlay in just three months of racing.

Shadow Devil is a $6.50 third elect for the Inglis Sprint, while Bjorn Baker’s Overpass sits at the top of the betting as a $2.60 favourite.

Overpass was a brilliant all-the-way winner at Rosehill Gardens in the Group 2 Expressway Stakes on January 29 where he beat home Forbidden Love and Anamoe, before he again stepped out and ran second to Lost And Running in the Group 3 Southern Cross Stakes.