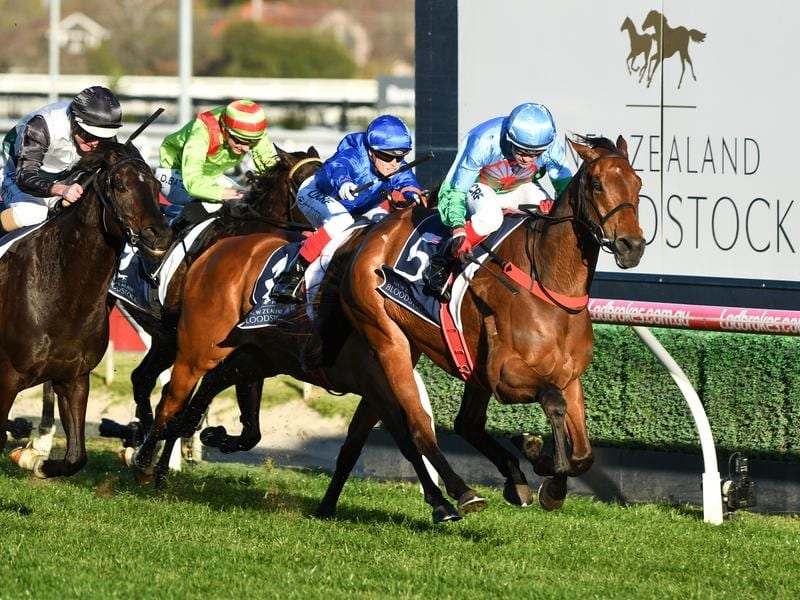 Trainer Lindsey Smith says Scales Of Justice (r) is up for the challenge against Mystic Journey.

Perth trainer Lindsey Smith says if he had a little more courage he would have started Scales Of Justice in the Feehan Stakes at The Valley.

Victory in that race would have assured Scales Of Justice a start in next month’s Cox Plate along with the opportunity for a $1 million bonus.

Instead Scales Of Justice runs in Saturday’s Makybe Diva Stakes (1600m) at Flemington which has $4.50 Cox Plate favourite Mystic Journey among nominations.

Like Mystic Journey, Scales Of Justice is Australian-bred and with the exception of the New Zealand-bred Verry Elleegant is the next best locally bred horse at $26 for the Cox Plate.

Scales Of Justice won Melbourne’s first Group One race of the new season, the Memsie Stakes at Caulfield on August 31.

Smith, who opened a Warrnambool base in July, said he would have had no hesitation backing Scales Of Justice up if the race was back in Perth.

He said Scales Of Justice had recovered well from his Memsie Stakes win and needed to do some work last Friday, a hit-out that pleased Smith ahead of a planned gallop at Penshurst on Tuesday.

“At home, I would have started him but I had to be a bit mindful of not being too much of a lunatic,” Smith said.

“When you have horses like that, you know you’ve got them pretty much at their top.”

Smith said Scales Of Justice’s owners were keen to tackle the Cox Plate while the trainer himself is looking forward to the challenge of taking Mystic Journey on while the gelding is in such good form.

Scales Of Justice is unbeaten in two Melbourne starts this campaign, with his colours lowered by three-year-old Dalasan, an entrant in Saturday’s Danehill Stakes at Flemington, in Adelaide between winning the Bletchingly and Memsie.

“I was happy after the Bletchingly Stakes,” Smith said.

“The other day was great so while he’s in the vein of form he’s in he can take that mare on.”

Of the 18 nominations for Saturday’s weight-for-age contest, Scales Of Justice is one of eight Group One winners.

Godolphin’s Hartnell leads the Group One haul with four wins ahead of Gailo Chop and 2017 Makybe Diva winner Humidor on three apiece.

Mystic Journey, a first-up winner of the Group Two P B Lawrence Stakes at Caulfield on August 17 has been installed the $2.10 favourite ahead of Scales Of Justice ($5.50) with Hartnell, Kings Will Dream, Rostropovich and Yucatan next best at $11.

The final field will be declared on Wednesday.