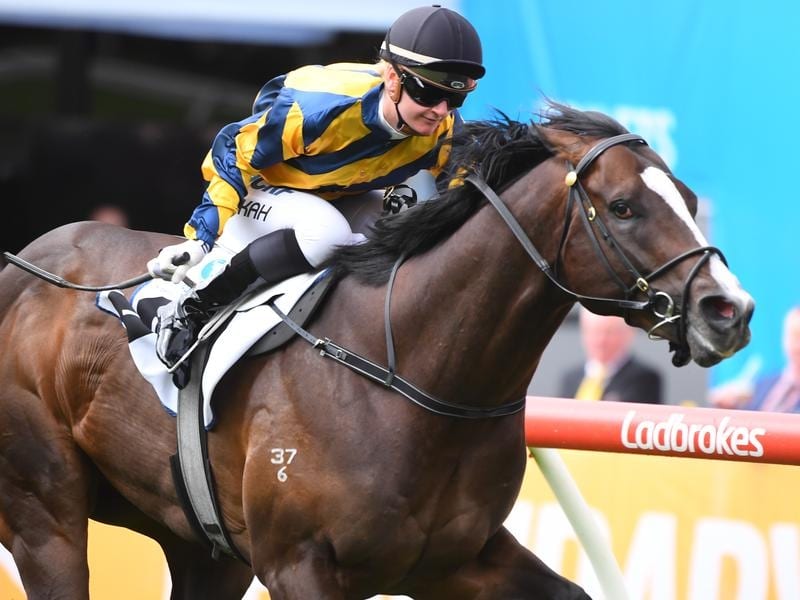 Sartorial Splendor has won two of his seven starts, including victory in the Red Anchor Stakes.

Trainer John Sadler is waiting for the day Group Three-winning colt Sartorial Splendor puts it all together in a race.

He hopes that might be during the three-year-old’s upcoming preparation, which is scheduled to begin in Saturday’s Listed Kensington Stakes (1000m) at Flemington.

He is one of two three-year-old colts who will take on older horses in the Kensington.

Last year’s Silver Slipper winner Time To Reign is the other three-year-old in the field, while Group One winner Microphone is being saved to run in the Australia Stakes on Friday week.

“It will be really interesting to see how he shapes up this time in,” Sadler said.

“Obviously we’re hoping like mad he has taken the next step. If he has he’s going to be extremely competitive. We feel he has, but we don’t know he has.

“Saturday is a really interesting race for him.”

After Sartorial Splendor won the Red Anchor on October 26, Sadler backed him up a week later in the Group One Coolmore Stud Stakes (1200m) but he was a well-beaten ninth on a soft track.

“I don’t think he was suited to the wet track but he was beaten a long way,” Sadler said.

“Perhaps you just put a pen through that and we might have been kidding ourselves running in a race like that.

“When he can get it all together maybe we’ll see something special.

“It’s what he’s able to do on the (training) track on his own, I’ve seen that he’s the best galloper I’ve had but you don’t have to look at too many of his runs to see that he gets it all wrong (in his races).”

All Too Royal heads the weights with 58.5kg and was favourite in an early market on Wednesday at $2.90.

Sartorial Splendor, who carries 54kg, was $6.50 and Sadler will use the race as a guide to the colt’s targets.

“For the rating he’s got (78) he doesn’t come in that well at the weights and he’s running in this race because there was nothing available for three-year-olds over 1000 metres,” Sadler said.

“This is the race we had to throw him into but in saying that I’m happy to be running.”