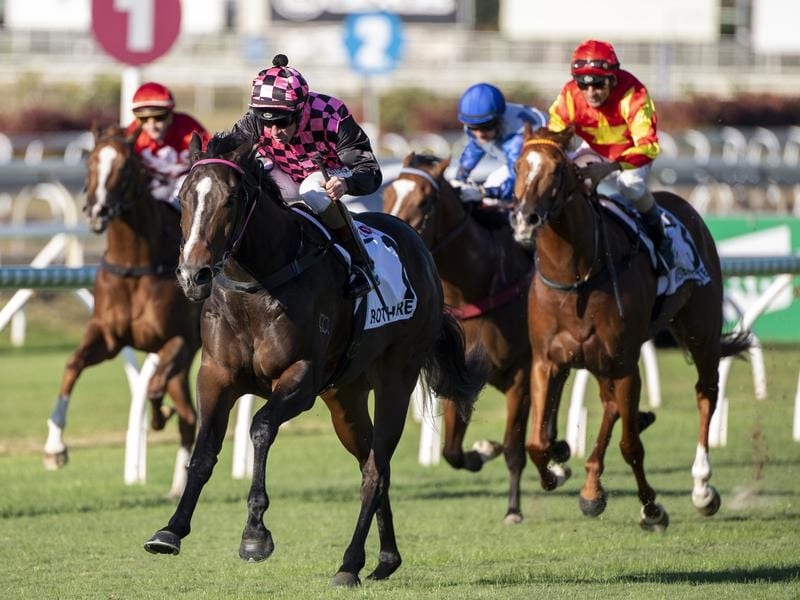 Rothfire has run a track record to score a runaway win in the Group One JJ Atkins at Eagle Farm.

Trainer Robert Heathcote allowed himself to think about a slot in The Everest after his gelding Rothfire ran a course record in winning the Group One JJ Atkins at Eagle Farm.

Rothfire’s time of 1 minute 21.06 seconds was a course record on the new Eagle Farm racetrack.

The $15 million Everest is run at Randwick in October and Heathcote believes Rothfire would not be out of place.

Heathcote was near tears after the race because it was a relief to get the win.

“Wow. He is some horse. I have been saying for months he is doing things even my multiple Group One winner Buffering couldn’t at the same stage, Heathcote said.

“I have been a nervous wreck all week. But when you have a jockey like Jim Byrne you have a big start.

“He is so experienced and calm. He didn’t panic when he couldn’t lead and ended up getting the run of the race.”

Heathcote said Rothfire would now go for a spell and come back for the spring.

“We haven’t put anything in concrete as there are a stack of races for him,” Heathcote said.

“But I have had some talks about The Everest and I am not talking out of turn.

“This bloke can take me around the world.”

Byrne rode his sixth Group One winner and his second in the Atkins after claiming it in 2017 with Capital Gain.

“I said to Rob before the race that we didn’t have to lead,” Byrne said.

“When they wouldn’t let us lead I was able to get a lovely sit behind them.

“They were never going to beat him. It makes everything worthwhile and he is some horse.”

Byrne has had two operations in the past six months after breaking his leg in a fall in December.

“It was one of the things which drove me to get back so I could ride Rothfire,” he said.

Stephanie Thornton said Gotta Kiss had proved she was up to top company.

“She really got home well but the winner was too good,” she said.

Brad Stewart said The Drinks Cart would be a top performer as a three-year-old.

“He was a bit at sea early but he really stretched out late in the race,” Stewart said.