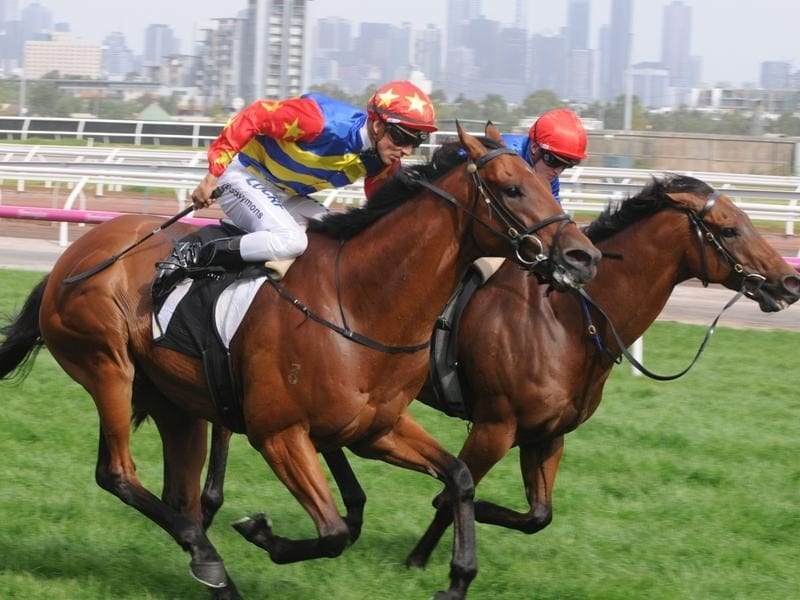 Rock ‘N’ Gold (outside) causes an upset in the Kensington Stakes at Flemington.

Rock ‘N’ Gold started the longest price of three runners for the Mathew Ellerton and Simon Zahra stable in the Kensington Stakes but the gelding has upstaged rivals to win the Listed sprint.

Seven-year-old Rock ‘N’ Gold ($17) resumed from a let-up in Saturday’s 1100m straight race and after settling midfield in the field of eight, he sprinted quickly at the business end of the race to win by a long head.

Ellerton and Zahra also had multiple Group One winner Flamberge first-up in Saturday’s race along with former Hong Kong sprinter Amber Sky who was having his first start for the stable.

Eight-year-old Amber Sky led the field but started to weaken inside the final 300m and finished at the tail of the field.

“He always runs well fresh and his jump-out on Monday indicated that he could run a cheeky race,” Zahra said.

Zahra said Rock ‘N’ Gold had initially been bought as a potential stayer but had turned out to be a sprinter.

“He just used to pull too hard,” he said.

“He’s been a little bit frustrating but a fantastic horse for the stable just the same.

“We’ll just try to keep him nice and fresh and find a race in three to four weeks.”

Eight-year-old Flamberge struck some traffic at a crucial stage before finishing fourth under his big weight of 60.5kg.

Rock ‘N’ Gold was ridden by Chris Symons who has had a long association with the Ellerton and Zahra stable.

“It’s great that I’m still getting those opportunities to ride in town and to get winners is another bonus,” Symons said.