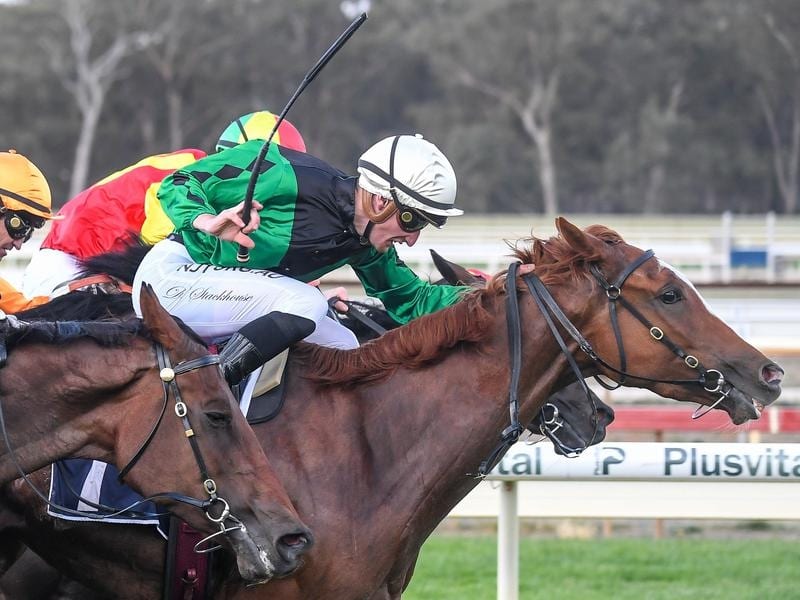 Riddle Me That has continued his rise through the ranks with a hard-fought Bendigo Guineas victory.

A year after Prince Of Sussex gave Matt Laurie a big two-year-old victory at Bendigo, Riddle Me That has supplied the trainer with a win in a Listed race at the track.

Prince Of Sussex won the Bendigo VOBIS Gold Rush at the corresponding meeting last year before going on to claim the inaugural VOBIS Showdown at Caulfield four weeks later ahead of a Hong Kong sale.

While Riddle Me That may not be in the class of Prince Of Sussex, Laurie thinks the gelding can continue on an upward spiral after landing his fifth win in Saturday’s Bendigo Guineas.

Ridden by Daniel Stackhouse, Riddle Me That ($4.20) defeated Score ($11) by a short-head with Zousonic ($31) charging home late for third.

Riddle Me That is now into his third racing preparation and Laurie said the gelding had made the step up each campaign.

“He is a smart horse and he has come back really well this preparation,” Laurie said.

“We didn’t draw so well last start but he ran particularly well at Flemington and obviously we had another wide draw today which I was a little bit disappointed about.

“But it was a great ride from Daniel and it is good to see him get a good win.

“I will have to look through the calendar and talk to the owners about what we do next.

“Obviously everything has been thrown into disarray but certainly this was a target and it is good to get it done.”

Like Laurie, Stackhouse said Riddle Me That was taking the required step each time he returns for a new preparation.

And what Stackhouse was impressed with was the way Riddle Me That relaxed on Saturday.

“The race didn’t work out perfectly for us but he relaxed nicely and was able to get balanced and work through his gears,” Stackhouse said.

“He toughed it out and he keeps improving every time he steps out.”