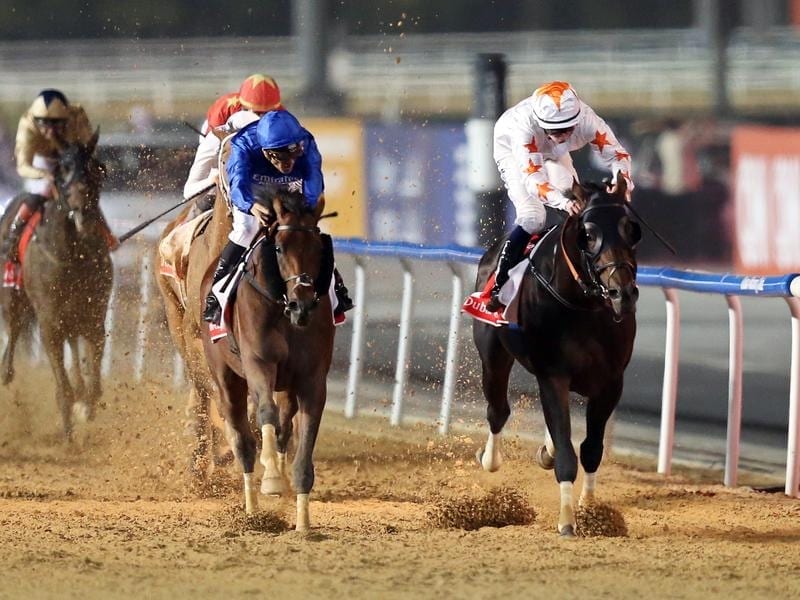 Al Ain staged its final fixture of the campaign, the penultimate meeting of the UAE season, on Thursday afternoon. The featured Al Ain Sprint was won imperiously by RB Money To Burn, defending her unbeaten record in the style of an exciting filly.

Well away under Fabrice Veron, the pair were never headed with the race in safekeeping just after halfway when they skipped clear with the jockey seemingly doing anything more than ask her to quicken. Kept up to her work in the final 200m, the 4-year-old filly was never in any danger of being caught. Trained by Eric Lemartinel for Sheikha Alyazia bint Sultan Al Nahyan, she has now landed each of her four starts.

A 1000m conditions contest, afforded Prestige status, she added this prize to a 1400m maiden victory on debut which she then followed with a pair of Abu Dhabi successes in the 1600m Listed Abu Dhabi Championship and over 1200m in the Group 3 Al Ruwais. Penalised accordingly, it made no difference.
Lemartinel said: “She is a very good filly who always does her best whatever the trip. We know she stays further but also has a lot of natural speed as we saw today. With a summer on her back we hope she will develop into a very smart filly for next season.”

The only Thoroughbred race on the card, a 2000m handicap, developed into a duel throughout the straight between Jazirat, who took up the running about 800m from the line, chased throughout the course of the straight by Mears, who hit the front inside the final 175m, but was forced to dig deep to hold the renewed challenge of the eventual runner-up. Ridden by Sandro Paiva, riding his first UAE winner at the tenth attempt and sporting the silks of Jumaa Mubarak Al Junaibi, Mears is a 5-year-old gelded son of Street Cry who has now won three times, all in the UAE, and twice over this course and distance.

Based with Al Rayhi, Brazilian Paiva said: “I have to thank Mr Al Rayhi for this chance on a horse we all know likes it here at Al Ain and is tough as he showed today. Obviously I am delighted to get a winner on the board and, hopefully, I will be back next season.”

In the opening 1600m handicap for horses in private ownership, Connor Beasley always looked confident aboard Kenza Al Mels and, once the pair took up the running from early leader AF Tathoor about 325m from home and the race was over as a contest. Trained by Elise Jeanne for her main patron, Mansoor Khalifa Sultan bin Habtoor, the 4-year-old filly, previously a maiden after eight starts, had finished second on both her most recent outings over 1400m here at Al Ain and then at Abu Dhabi on the turf.

“She is a very nice filly, only four, and open to an awful lot of improvement for next season,” Beasley said. “She is a big filly with a lot of scope. At the moment this 1600m is ideal but as she matures she will stay further and, as I said, we think she will be a nice filly for next season. I was back in the UK this week but glad I came back. She deserves a win after some good runs and, to be honest, I probably hit the front too soon on her.”

An hour later Beasley was back in the winner’s enclosure after a virtual carbon copy victorious ride aboard Blue Diamond, who always appeared to be travelling best of the 15 runners in a 2000m maiden for horses foaled locally. Seemingly content to take his time, Beasley was happy to allow Jose Santiago and Jabaar set sail for home leaving the home turn but always had that pair in his sights, driving his munt to the front having passed the 200m pole to win comfortably. Trained by Abdallah Al Hammadi for Al Ajban Stables, the 4-year-old colt was opening his account at the seventh attempt having twice finished second, including on his previous outing in a maiden over 1800m here at Al Ain.

“I was very unlucky on him last time when he stumbled at the start but still nearly won,” Beasley said. “Connections put a visor on him today and that has really helped, but again I probably hit the front too soon.”

From a long way out there only looked likely to be one winner in a maiden over 1800m with Richard Mullen oozing confidence throughout aboard Somoud on whom he sat motionless as they eased to the front with about 375m remaining. Onward tried to mount a challenge but once Mullen pushed the button his mount shot to clear to lose his maiden tag at the tenth attempt but only third locally after seven outings in his native France and twice finishing second, at Abu Dhabi, since arriving in the UAE.

Saddled by Ahmed Al Mehairbi for Yas Horse Racing Management, he impressed Mullen, who said: “That was third time lucky having finished second on him twice and he deserved that. The dirt surface has really suited him and his turf form is good so that opens up a lot of options so, hopefully, he is going to be a nice horse for next season.”

Owner and trainer completed a quick double in the following 1400m maiden, restricted to fillies and mares, combining with Nayrouz who looked an unlikely winner at halfway when nearer last than first under Szczepan Mazur before passing at least eight rivals in the straight, hitting the front just before the 200m pole and running on strongly to ultimately win easily.

A 5-year-old mare, she was opening her account on her sixth local outing, half her career starts, and Mazur said: “The trainer was pretty confident in fairness and, once in the straight, she really picked up well.”

A similar scenario emerged in the following 1400m maiden, this one for 4-year-olds only, in which Opera was pretty much last of the main group of runners on the home turn before making relentless progress throughout the duration of the straight, grabbing the initiative from Dora Al Mels just before the 200m pole before digging deep to deny that rival’s renewed challenge.

Completing doubles for Al Hammadi and Al Ajban Stables, Fernando Jara was in the saddle on this winner who was registering her first success on her dirt debut after four appearances on the Abu Dhabi turf when finishing well beaten on each occasion.