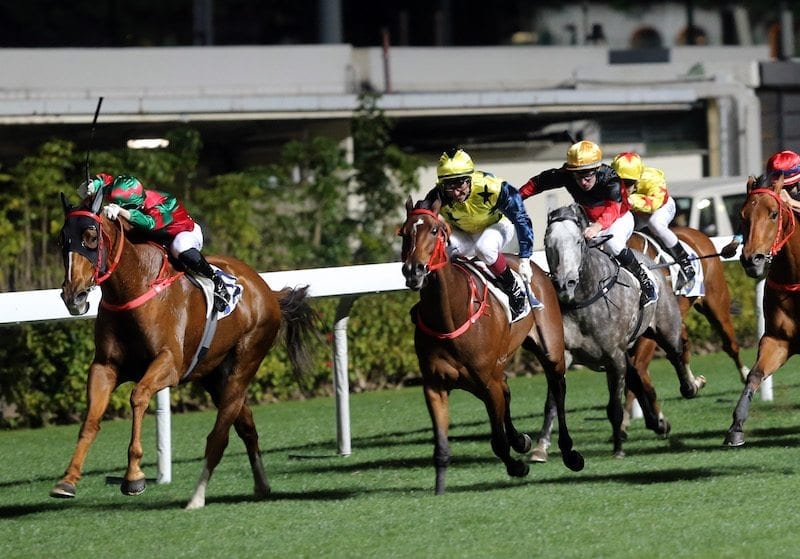 Orionids (114lb) lifted the trophy race at Happy Valley (Wednesday, 21 March) on a night when Derek Leung reached a milestone and double figure winners took out half the card.

Danny Shum’s charge was one of two favourites to salute on the eight-race programme. He did so at odds of 4.3 in the Class 3 Hong Kong Exchanges Challenge Cup Handicap (1200m).

Orionids’ triumph came at the fourth attempt this term, the gelding having returned to action in February after a 10-month absence. The strapping five-year-old suffered an injury to his near-fore tendon after securing a win over the distance at Sha Tin last April.

“He’s a big horse, and he’s very consistent, just look at his form, he’s an honest horse and a straightforward ride,” Shum said.

Jack Wong drove the chestnut down the inside fence, heading the front-running Gamechangers (124lb) close home for a half-length score. But that route to success was taken only after a flirtation with a shift away from the rail on the home turn.

“The trainer told me that I should have stayed on the rail and gone through, and in the end that’s what I did but I was just trying to keep the horse’s momentum and keep him comfortable – he’s a very big horse, 1300lb,” Wong said.

“He quickened and went through with some enthusiasm – he’s fit and he’s honest and I’m thankful they gave me a chance to ride him.”

Shanghai Master was the evening’s shortest-priced victor, scoring at odds of 3.4 for trainer Francis Lui. The four-year-old raced 10 times in Australia for three wins but was a Hong Kong maiden after nine starts before tonight.

“Happy Valley is better for him than Sha Tin, he was panicky and nervous there but he was calmer here,” Lui said after jockey Vincent Ho had steered the More Than Ready gelding to a strong length and a quarter success.

“He raced quite a lot in Australia so you’d think he’d be mature but he just needed time to get used to things here,” the trainer added.

Derek Leung notched his 250th win as a licensed rider in Hong Kong – including a Pattern race victory in Macau – to lose the 2lb allowance given to graduates of the Hong Kong Apprentice Jockeys’ School. The rider achieved the landmark when the 5.1 chance Planet Star took the third, a 1650m Class 4, for trainer Paul O’Sullivan, Leung’s former master.

“It’s good, it’s been nine or 10 years to get here so I’m happy – I’m just thankful to the owners and trainers that support me,” Leung said. “I’ve won big races without the claim, so I know that I can do the job without it – the Group 1 win has helped me a lot this season, and this is a big step for my career.”

Douglas Whyte delivered the Dennis Yip-trained 9/1 hope Roman Impero (118lb) with a well-timed run to win the Class 3 Man Yiu Handicap (1650m) by a head in a driving finish from Silverfield (115lb).

Umberto Rispoli caught his rivals napping with a mid-race move on 16/1 shot Sweet Bean in the opener, the Class 5 Man Cheung Handicap (2200m). That was enough for the Caspar Fownes-trained seven-year-old to win in a slow time of 2m 20.09s.

Matthew Chadwick positioned Happy Bao Bei (129lb) in a striking position behind the front-running Nice Fandago (124lb) in race two, section one of the Class 4 Finance Street Handicap (1200m). The Me Tsui-trained 13/1 chance battled to a head win.

Pakistan Star was unable to make the frame on Sunday but owners Kerm and Kareem Din saw their green and white starred silks hit the board in the fourth contest, the second section of that Class 4 1200m handicap. Alberto Sanna ensured that the Tony Cruz-trained Pakistan Baby hung on by a nose at odds of 14/1.

And there was a 12/1 winner of race six, section one of the Class 4 Pedder Handicap (1650m). Trainer Frankie Lor, second to John Size in the premiership, notched win 41 for the term when Neil Callan punched the Hong Kong International Sale graduate Mr Kool to a short-head win.