When it comes to betting on horse racing in Australia, one of the best sports betting apps available is Betfair. While every other betting app in the country provides you with odds to bet on, the Betfair apo has created a betting exchange system, where punters bet against other Aussie punters and not the bookie. With this unique feature, it has ranked as one of the world’s best sports betting platforms. Also, punters can access the services of Betfair on the go on their Android or iOs devices, as well as via the web. Read on to learn about the Betfair app and how to download it for both Android and iOS smartphones and tablets. 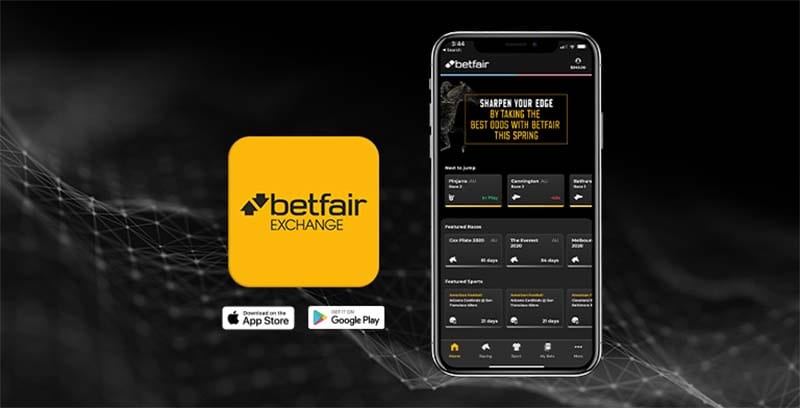 In the area of promotions, do not get your hopes up as you’d rarely see any available promotions. It is not entirely a bad thing as we know most of these promotions are filled with terms and conditions that make it hard for punters to get value from. Also, local laws in Australia has made it difficult for bookmakers in Australia to offer the type of promotions that are rampant with US sports betting sites. The betting exchange feature of Betfair in itself is a promotion. Punters have myriad options when it comes to placing bets as you not only have the option of backing a horse to win, you can also lay them to lose.

However, what can pass as a promotion is the fact that over time, you are allowed to reduce the amount taken from you by Betfair as a commission on your wins. While it might not seem like much, the platform allows you to cut down these commissions by up to 60% through points picked as a result of your betting activity at the Betfair hub. Discounts start to roll in only after you have gathered at least 7,000 points through your betting activities. At that point, you get a ten percent slash on commissions. If you manage to rack up to 80,000 points, you will be entitled to a fifty percent slash. To get the maximum discount possible (sixty percent), you’d have to get at least 150,000 points. It’s as straightforward as it sounds. The more you bet with the Betfair betting exchange, the more points you accumulate.

Google has stringent laws regarding sports betting apps on its platform. It is impossible to find any sports betting app for Android listed on Google Play Store. However, provisions have been made by Betfair for punters to get the app free of charge. To get it, every punter has to head over to the Betfair official website. As an incentive and reward for your effort, every new member that signs up through the Betfair exchange Android app will receive 10 Australian dollars as a welcome bonus. It is worth pointing out that the app is secure despite it being not on the most trusted app source for Android devices.

First, you can get it through the Betfair official website, just as it is for the Android app. After downloading the source file, you’d have to locate it in your files, click on it, then the installation process will start.

Things are a lot easier if you get it from the Apple store. Apple does not have restrictions against betting apps like the Google play store. Hence, it is convenient and extremely easy to get the app through the Apple store. All you need to do is search for the Betfair app and click on download. When your download is complete, the app will install on your device automatically so you can start your betting journey. First-time users of the iOs app are also entitled to the welcome bonus.

Australia hosts some of the major horse racing events globally, with some of the best racetracks in the world. These racetracks are situated in some of Australia’s biggest cities. A few of the most popular Australian racing meetings to bet on via the Betfair.com.au app include:

Other popular racing states in Australia

There are other cities like Brisbane and Adelaide that hosts some of Australia’s biggest horse race meetings, including meetings that the betfair app will cover. Brisbane is home to the Doomben and Eagle Farm racetracks, with these two of the biggest and most well-know racing venues in Australia.

Our Verdict on the Betfair racing App

Betfair is a market leader in betting exchanges, which means you will not find a better betting exchange app in Australia. Punters can set the bet odds to an extent seeing that they are betting against fellow Aussie punters. However, if you are new to horse race betting, this is not the app for you, with exchange betting more complicated than your average bookmaker. It is recommended that hour first try your hand at other “regular” betting sites. Overall, Betfair is a very decent horse race betting app and scores a solid 8/10.